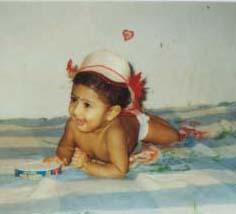 FYI: Atrial septal defects are a group of rare heart defects that are present at birth (congenital). The normal heart has four chambers with two upper chambers known as atria. They are separated from each other by a fibrous partition known as the atrial septum. The two lower chambers are known as ventricles and are separated from each other by the ventricular septum. Valves connect the atria (left and right) to their respective ventricles. A small opening between the two atria (foramen ovale) is present at birth. Shortly after birth, the atrial septum gradually closes and covers this opening. In infants with atrial septal defects, the atrial septum does not close properly. In this disorder, the opening between the atria persists long after it should be closed, resulting in an increase in the workload on the right side of the heart and excessive blood flow to the lungs. Various respiratory problems and/or heart failure may develop.

Sanali underwent percutaneous device closure of the ASD successfully at the Apollo Hospitals in Colombo on May 25, 2005. Dr. K. Sivakumar is her pediatric cardiologist. The funds for her surgery had been provided by Care Sri Lanka (www.caresrilanka.com)