After a directive from the Ministry of Health for all Health Training Institutes to close on the 14th of November, the project management held several discussions with the Directorate of Training to allow the College to prepare for their examinations as they had previously planned to have the end of semester examinations during the second week of December. The examinations were successfully held from the 15th-19th of November and the college closed thereafter.

The general performance was quite impressive with the majority of the female students performing well. 18 students were below the average score of 68%. There has however been notable improvement from the foundation course, the beginning of semester continuous assessment tests (CATS) and end of semester examinations. The main challenge the students are facing is English language skills due to the strong Arabic influence. During the last faculty meeting, the possibility of hiring an English tutor to teach the language co-currently with the Nursing and Midwifery courses was discussed for the coming year. Other challenges include; lack of transportation for day students and college administration, sufficient reference books, feeding and prolonged absence from school by student mothers who recently delivered.

The students approached the project management and the Ministry of Health to assist in transporting them to their respective states after the end of semester. UNFPA funded this activity which amounted to $5,200. This included bookings on WFP flight to the Upper Nile region and payment of bus fares to those that reside in the greater Equatorian region. This activity was not budgeted as the students were provided with monthly allowances. After several inquiries with other Health Training Institutes, it was found that students are provided with transportation to their respective states however some institutes do not grant monthly allowances. This activity would therefore be factored into the 2011 budget for review by all partners.

Office and Skills Laboratory Equipment from JICA and books from WHO

Project partner JICA donated; 8 computers, 2 laptops, 3 printers, projector, screen, UPS, scanners and other office and skills laboratory equipment for the college. The items were received on the third week of November by the college Principal and the Project Manager. As the school was closing, the items were stored at the UNFPA warehouse to be used next year at the new completed college facility. WHO also provided additional reference books for microbiology, nursing and midwifery. They now total to 53 books, 3 more will be availed next year in addition to other IT and office equipment from WHO.

Photo: Undersecretary of the Ministry of Health and the Vice President of JICA at handover ceremony 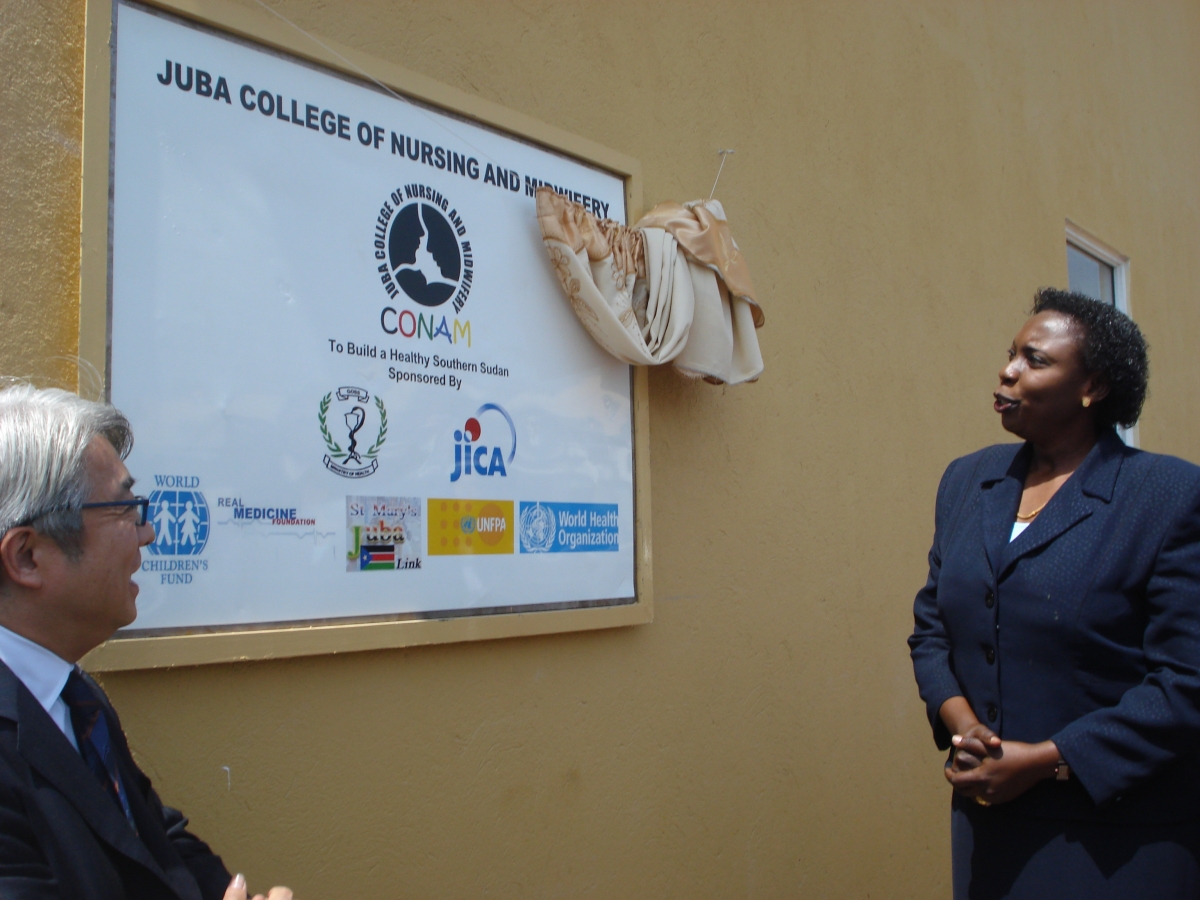 A colorful ceremony was held on the 6th of December to commemorate the completion of construction and renovation work by JICA at the Juba Teaching Hospital. It was officiated by; The Undersecretary MoH, Dr. Olivia Lomoro, JICA Vice President-Kiyoshi Kodera, Director for Training-MOH-GoSS- Dr. Samuel Koang, Head of WHO- Dr. Abdi Mohammed, The Japanese Counselor to Southern Sudan, Team Leader St. Mary’s Juba Link-Tim Walsh and UNFPA Programme Specialist/Officer in Charge (OIC) – Kondwani Mwangulube. This event was attended by all project partners, MOH representatives, Juba Teaching Hospital staff, college tutors, staff and students and other well wishers.

All heads of agencies, organizations and ministry commended the combined efforts of all partner in making this well deserved milestone in Southern Sudan. They further pledged their continued support for the next and coming years in an effort to increase the human resource for health numbers, towards the reduction of maternal and neonatal mortality (Pictures of the Handing over Ceremony will be sent by Sophia).

UNFPA and its partner stakeholders carried out the 2010 Annual Work Plans review and prioritized activities for 2011. Budget lines for the 2011 project activities were not yet allocated however AWPs will be shared with all partners in order for them to pledge on what activities they could possibly fund.