Progress over the past three months towards the commencement of the first class of the Southern Sudan College of Nursing and Midwifery at the Juba Teaching hospital is worth noting. The coordinated efforts of all stakeholders under the direction of Ms. Bilha Achieng, UN Intern at the UNFPA have addressed a number of complex issues pertaining to the schools development and with favorable outcomes. 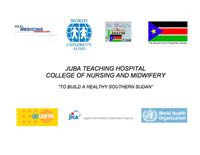 It also bears mention that the consortium supporting the program has grown. We’d like to welcome The World Health Organization South Sudan, (WHO) and The Japanese International Cooperation Agency (JICA) to the group. Both organizations are making significant contributions to the successful establishment of the College of Nursing and Midwifery.

November was a busy month for the Ministry of Health offices of the Director Generals of Nursing and Midwifery and Human Resource Development as they handled the candidate interview and selection process. The office of the Director General Nursing and Midwifery short-listed 79 applicants for the Nursing and midwifery program from most of the 10 states in Southern Sudan. Below is the public announcement for candidates to apply. 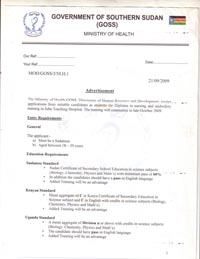 The breakdown of representation by states is as follows:

There was no representation from Western Bahr el- Ghazal, Northern Bahr el-Ghazal, Unity and Lakes States. Since the interviews took place in 3 states the applicants from Jonglei, Warrap and Western Equatoria had to be flown into Juba for interviews for the sake of equal representation.

Further, there were significant differences in the number of applicants interviewed between the equatorial region and the rest of Southern Sudan mainly because of untimely coverage of advertisements in the ten states. Applicants were not able to arrive in time for the interviews in both Eastern Equatoria State and Upper Nile State.

An interview panel was formed to carry out the interviews and come up with criteria for selection of the students. The panel was comprised of members of the Ministry of Health, offices of the Directorates Nursing and Midwifery and Human Resource Development, also the Nursing School at the Juba Teaching Hospital. 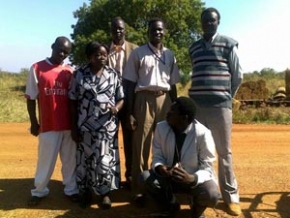 The written portion of the interview consisted of 70 questions measuring the general knowledge of the Sciences, Mathematics, First Aid and HIV/AIDS. During the oral interviews, which involved 30 questions, some difficulties communicating in English were reported. The panel will however form criteria for the selection of the final 40 students that will take all the varying factors into consideration. 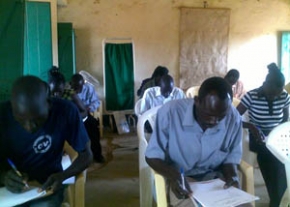 The panel has selected a total of 17 nurse and 8 midwife students. This was based on the performance of both oral and written interviews and exams respectively. While the general outcome of the interviews was commendable, the performance of women was reported as quite low and was indicative of the country’s 12% literacy rate for adult women. Another interview was conducted in early February in Juba to source especially midwife students however the results were unfavorable.

The registered nursing curriculum for the diploma course in nursing for the three year period has been developed and approved. A midwifery curriculum has not yet been completed. The MOH has three options:

It was also suggested that both curricula include a foundation course of Mathematics, English and other courses during the first three months of the first year. This will also ensure continuity of learning as the diploma curriculum is being developed.

The government is taking measure to strengthen the education system in general to improve the quality of the candidate pool for health care other sector applicants for professional positions.

One of the primary concerns of the program development, in addition to the construction of the new library and teaching blocks has been the procurement of the educational materials and skills lab equipment that will bring South Sudan into the 21st century. Up until now they have been relying upon a limited number of recent course books but predominantly, decades old resources.

We are deeply grateful to The World Health Organization, Juba Sudan, and Director Mrs. Roya Sadrizadeh for their commitment to support the program. In addition to The WHO, support from Teaching at Low Cost (TALC) has also been secured.

We have commitments for the following materials:

Quotations on furniture and stationary are in the final stages.

The Japanese International Cooperation Agency, (JICA), who will be assisting with construction of education blocks, library and tutor residence, has also expressed a willingness to provide course materials i.e. computers.

Perhaps the greatest challenge the college has faced until now has been acquiring funding and construction expertise for the building of new school blocks and upgrading the existing blocks. Recently, Kiyotaka Tamari, Project Formulation Advisor at JICA, informed us that JICA had a budget line expansion for the improvement of training institutions in South Sudan and they would be willing to support the college. They will be providing their own consultant engineer team and carry out all necessary construction and renovations on the administrative block, library and tutor’s residence. Student Residence halls remain a long term goal for the program. Assessments will being next in March.

Public bid requests for upgrades to existing training blocks, funded by RMF, and made possible by a grant from World Children’s Fund (www.worldchildrensfund.net) have already been placed in the newspapers for transparency and quotations are being reviewed.

The project has been fortunate to secure 2 tutors for the period of training to start the program and the UNFPA is presently interviewing for additional tutors for the program, funded by RMF. The UNFPA will also be providing a IUNV project manager to support the administrative staff and the ongoing development of the program. St. Mary’s Hospital UK IOW has also been coordinating its volunteer staff to provide a stream of on-going nursing and midwifery tutors to the program once it is underway.

The GoSS Department of Human resource development and Juba Teaching Hospital will provide salary support for the new hires to their institutional staff such as administrative assistant, lab technician, accountant; and non-technical staff such as the watchmen and cleaners. 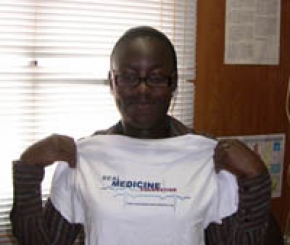 Moving a project of this magnitude forward can only be accomplished by teamwork and a clear vision of the project’s outcome and impact. We wish to thank World Children’s Fund for their vision to catalyze this project through their generous grant; GoSS MOH departments of Nursing, Midwifery and Human Resources as well as all partners of the consortium for their participation, commitment, time and dedication. Together, we are making a difference.

We’d also like to thank Bilha Achieng, our UN Intern, for signing on with Real Medicine Foundation to continue her work on the program. Welcome aboard, Bilha!