In continuation of our dialogue with the local district health officials regarding our exit strategy, a visit to the Balakot was the natural step. Our dialogue with the local health office had led us to devise an exit strategy whereby we would donate all the medical and diagnostic equipment of our clinic to the nearest Basic Health Unit (BHU) that was bereft of the same in order to improve their operations for the end result of ensuring that the Talhatta community has access to healthcare. Needs assessment of neighboring BHUs by our clinic staff had shortlisted two BHUs. The agenda of the visit to Balakot included a meeting with the local health officials, a visit to the selected BHUs, a visit to the Talhatta clinic for a project-end meeting with the community leaders and finally on our return, a meeting with the Hashoo Office in Mansehra. 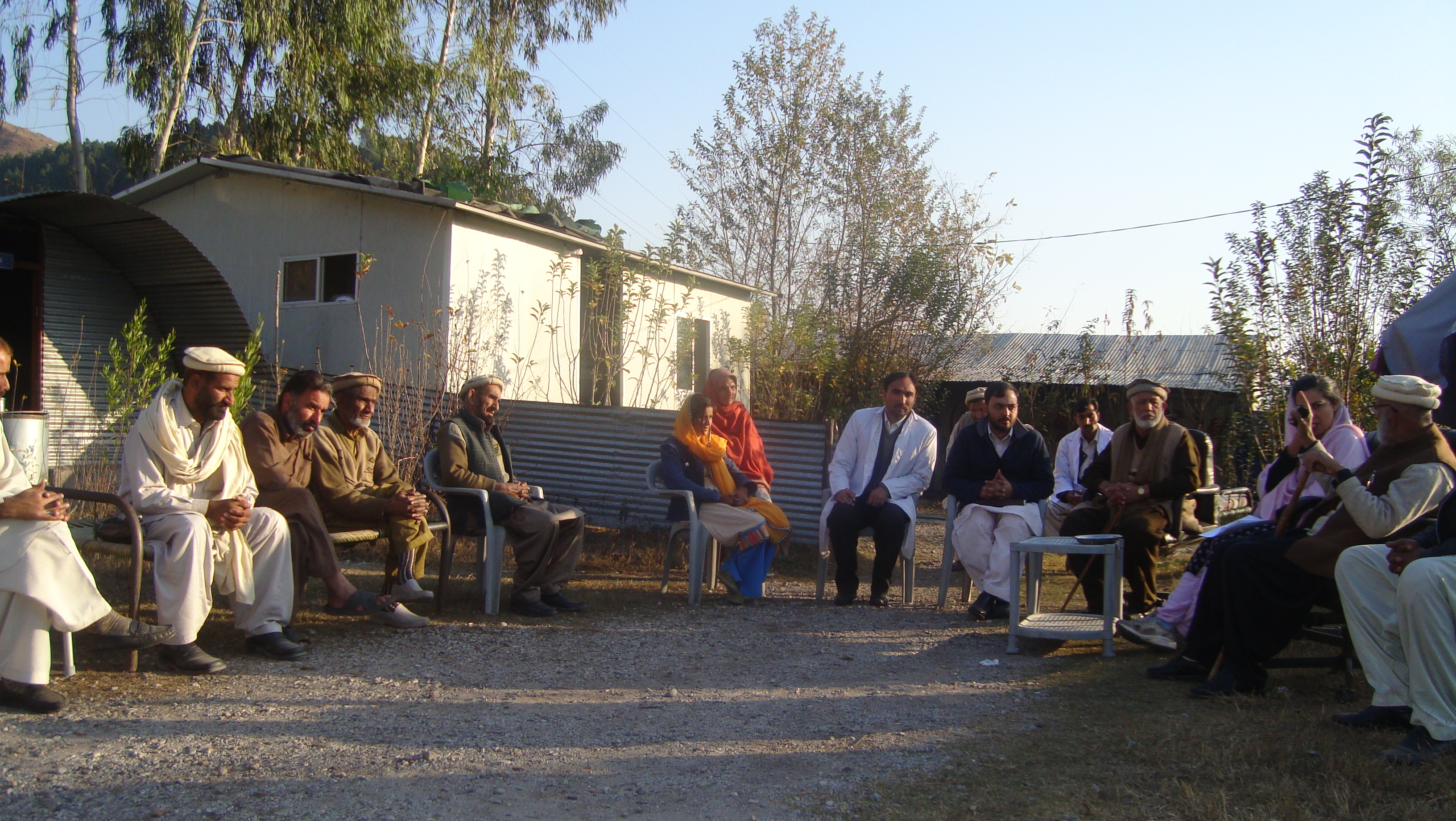 The journey began at the wee hours of the morning to reach Mansehra by 11.00 a.m. Mr. Nazar Karim, our key man in the Balakot project who had established and maintained an open dialogue with the local health office met us in the Hashoo Office in Mansehra and accompanied us to the meeting.

1. Minutes of meeting with EDO Health

After formal introductions, the meeting started off on a note of appreciation by the EDO Health of our Talhatta project which was the only health clinic that has surpassed the five year milestone last year and was still present.  We had a fruitful discussion with the EDO health, about the quality of services rendered by RMF and HF during the last six years, challenges of primary health care in the area, the overwhelming needs of health units and the unfortunate but very important aspect of limited funds.

We informed him of RMF-HF’s exit strategy of step-by-step phasing out of the area which began with the trimming down of the set up to a residual clinic. We briefed him about our attempt to introduce a micro-insurance health scheme to this area for which we conducted a qualitative evaluation composed of a series of community focus group discussions as well as key informant interviews. Disappointing results of our evaluation had finally led to the closing down of our health unit in Talhatta.

At this point, the EDO Health informed us of the amazing news that Pakistan People’s Health Initiative (PPHI), a private-public organization, has taken up four new districts in KPK to implement their healthcare revitalization project including Districts Bannu, Abbottabad, Lakki Marwat and District Mansehra.

The Federal Government of Pakistan, through the Special Initiatives Division, launched a country wide Program to be known as the People's Primary Healthcare Initiative (PPHI).

The basic objective of the PPHI is to improve health service delivery at the primary level through improvement of management of the health institutions. For this purpose, Agency/ District Support Units (A/DSUs) have been established in each selected District/ Agency to take over the management of Basic Health Units (BHUs). An Agency/ District Support Manager (A/DSM), who is head of the A/DSU, is responsible for the smooth provision of Primary Healthcare Services to the rural population, the majority of which is poor and without resources.

As a matter of policy, the Government considers it as an essential initiative for the alleviation of poverty. PPHI endeavors to achieve this objective through improvement in the basic infrastructure of the health facilities, ensuring availability of medicines and staff and by coordinating various activities relating to the healthcare service delivery at primary level including promotive, preventive and curative healthcare. The Program is fully owned and funded by the Federal and Provincial Governments. PPHI has been in operation for more than a decade and has successfully revamped the primary healthcare infrastructure in several selected districts of Punjab which has earned it a good reputation in terms of services rendered and sustained. PPHI works on two models of primary healthcare including the “RahimYar Khan Model” and the “Batagram Model”. The RahimYar Khan model operates on the premise of revitalizing only BHUs according to the Government’s requisites of a BHU while the ‘Batagram Model’ revitalizes a wide range of primary healthcare facilities i.e. Rural Health Centers (RHC), Medical dispensaries, BHUs, MNCH centers, Ante-Natal Centers etc.

The MOU between the District Government of Mansehra and PPHI was signed in October 2011 and budget allocation and release took place in November. Currently they are about to launch the needs assessment of all the BHUs in the district to determine their way forward. Implementation of actual adoption and revitalization of BHUs is estimated to start in February 2012. PPHI is currently contracted for a 3 year period but the EDO Health estimates that this may increase to 5 years.
PPHI will implement the “RahimYar Khan Model” with a few additional modifications of the following targets:

• To involve the TB control Program at BHU level
• To increase the general OPD of BHU by creating community awareness
• To strengthen the referral system to secondary and tertiary healthcare facilities.

EDO Health was asked what the government stance would be if an NGO wishes to adopt and revitalize a BHU. His response was that the government was welcoming to any such intention except that the MOU for such a project would be signed by three parties including the NGO, the local Health Department and the local PPHI office. Additionally, the NGO would have to adopt the ‘RahimYar Khan Model” for implementation.

We explained that with the closure of our Talhatta health clinic, we had a list of medical equipment and diagnostic machinery which we were interested in donating to a BHU in the same catchment area of our operations. The EDO advised us that the most efficient, reliable and transparent approach would be that we donate the said goods to the EDO Health Office store in Mansehra. The PPHI was in the process of carrying out their needs assessment survey and these donations would be counted in the assets category, thereby aiding the government infrastructure. The outcome of the PPHI intervention would eventually benefit the catchment population of Talhatta, hence fulfilling our desires and intentions.

We agreed to adopt this approach and on this positive note, the meeting came to an end.

The two shortlisted BHUs were BHU Shohal Najaf and BHU Dogga in Ghari Habibullah. Short listing of BHUs was based on easy accessibility by road and walking distance from Talhatta. We were pressed for time since the hours of the clinic operation closed at 2.00 pm and we had a travel time of more than 2 hours from Mansehra to Talhatta; so we decided to visit only one BHU in Shohal Najaf, 20 minutes away from our Talhatta Health Unit. It was a newly built BHU with a 12-room structure between the OPD (Doctor’s Room), LHV, and emergency rooms, the ward and the pharmacy. All rooms were equipped with the latest machinery, all in functioning order. The only thing lacking was human resources since the BHU was run by a medical technician without the supervision of a doctor. A LHV was present.

3.  Visit to Talhatta Health Unit and meeting with the community

The next stop was our Talhatta Unit where we met with a group of key community leaders. It was a nostalgic meeting where the community expressed their reluctance to see us go. They expressed great satisfaction and appreciation of the Health Unit over the past almost 6 years. We informed them of the impending PPHI intervention which would benefit them in a few months. They requested us to create an opportunity where they could be introduced to the PPHI officials in-charge of Talhatta so that they could personally provide guidance and create a smooth transition of their project in this community.

We then visited all the existing sections of the residual clinic and physically conducted a stocks inventory survey. A detailed inventory list of equipment, machinery, office furniture and residential furniture was made. Recipient for donating these materials have been proposed as below.

The last stop was a meeting with Mr. Atif, Manager HF regional office Mansehra. He was updated on the day’s progress. Mr. Atif suggested the idea of a formal closing ceremony/seminar to mark the end of the RMF-HF Balakot Health Project. The agenda of the seminar would be to highlight all the work done in the past five years. This could be augmented with a photo slideshow and testimonials from key community leaders of Talhatta; the second point of the agenda would be to discuss the various processes that were adopted for a successful exit strategy; and finally the seminar would invite the PPHI Mansehra officials to present a brief introduction of their project plan implementation. The participants for this seminar would be about 20-30 people invited from district health office, PPHI local officials, key community leaders and the media (print and electronic). This seminar can be headed by the EDO Health and would provide an excellent ground for the donation of our medical and diagnostic equipment to the health department.