Background
The October 8th, 2005 earthquake destroyed large portions of the NWFP and Kashmir (AJK) regions. Widespread death and devastation affected an area of approximately 30,000 square kilometers, home to more than 3 million people living in hamlets spread in Himalayan slopes and valleys. This disaster was described as the world’s third deadliest natural disaster in the last 25 years: it killed more than 80,000 people, injured more than a 100,000 and made 3 million homeless in the highest mountain ranges in the world (Brennan RJ and Waldman RJ, New England Journal of Medicine, April 2006).  Thousands of people were left injured. Most of them suffered even more as they were subjected to extremely harsh living conditions in the aftermath. 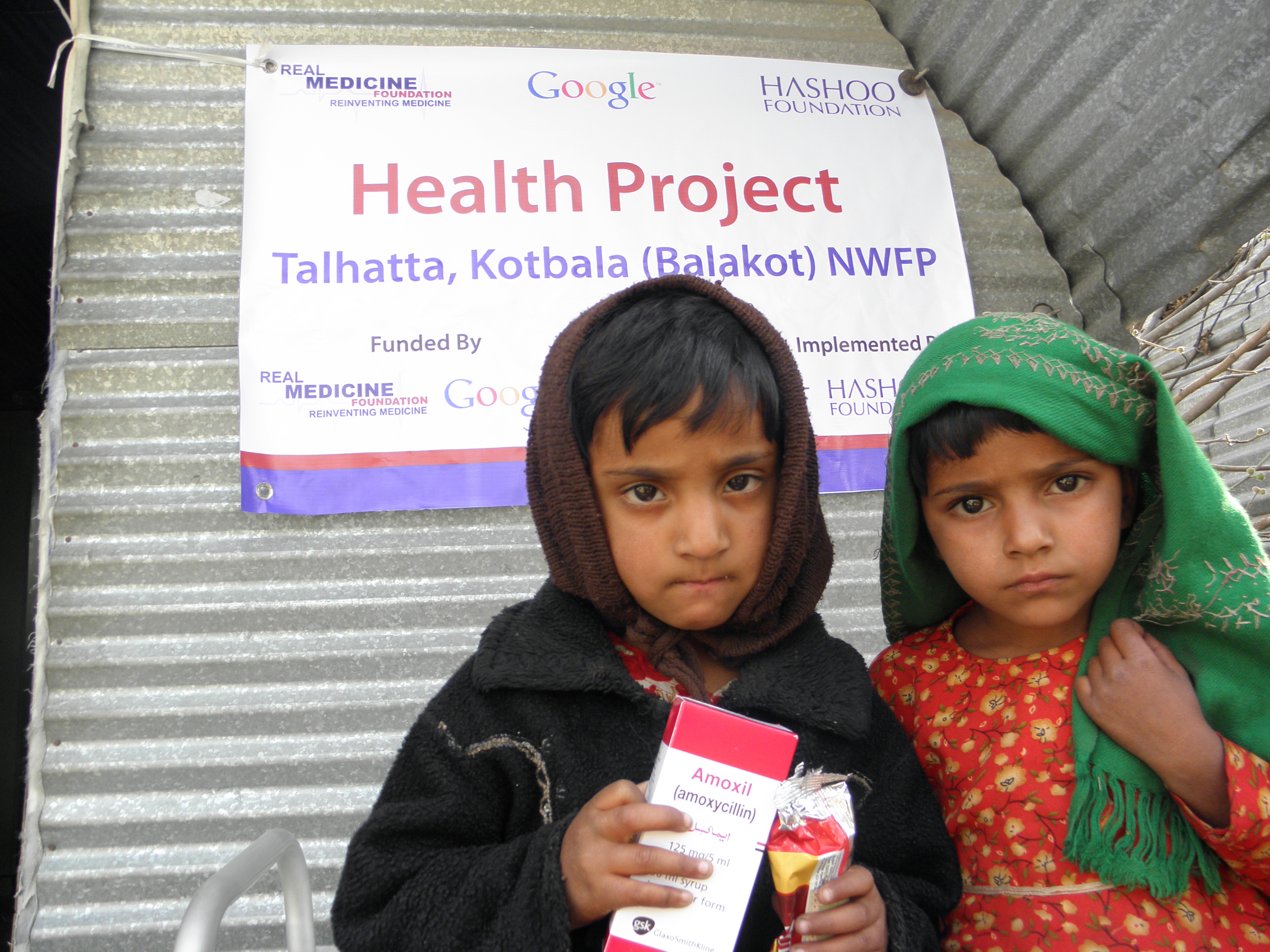 In October 2005, Hashoo Foundation established a medical relief camp in Jabri (UC Shohal Moizullah, District Mansehra) where 10 to 15 doctors volunteered to help alleviate the sufferings of the residents coming from remote villages located in the mountains surrounding Balakot. The medical camp ran for more than three months. During that period, patients were treated for crush injuries, infected wounds, orthopedic problems, post operative care and acute illnesses sustained as a result of the earthquake; others underwent treatment for chronic diseases which had gone untreated for years due to the remoteness of the region. As the Basic Health Unit (BHU) established by the government had been completely destroyed, the need for sustained health care for the residents of the area was felt strongly.

RMF-HF Health Care Project
The RMF-HF Health Care Project resulted from a partnership between Real Medicine Foundation USA and Hashoo Foundation in mid-January 2006. A formalized RMF-HF Health Care Unit was established in Shohal Moizullah in February 2006. This health unit employed a full time MBBS doctor, a medical technician, two LHVs and a dispenser.
The health unit is equipped with a complete range of medical equipments, including a nebulizer, glucometer, deep freezer/refrigerator (for medicines and vaccines), an oxygen gas cylinder, a complete ENT diagnostic set, and a well-equipped room for examining gynecological cases. The health unit is also furnished with two room coolers, heaters, and an electric power generator to face drastic weather conditions. An ECG machine and a laptop assist in diagnosing ischemic hearth disease patients and reduce referral load to other hospitals.

As the terrain is extremely difficult, a jeep has been modified as an ambulance. This vehicle can easily access remote areas, transporting referred patients to secondary and tertiary care units in neighboring larger cities and towns.

Goal
To improve the health and well-being of those affected by the October 2005 earthquake, with a focus on the 120,000 persons in five union councils of Tehsil Balakot.

To improve:
a) The coverage and utilization of services by remote village populations;
b) Access to healthcare for girls and women;
c) The standard of health care.
To involve the government and local communities in the health care system and build their capacity to take ownership of the system after completion of the project.
To involve and train government health workers who wish to work in this area.

Through Tides Foundation, on the recommendation of the Google Inc. Charitable Giving Fund, RMF received a grant of USD $25,000 for the RMF-HF Primary Healthcare Clinic in Talhatta.  Tides Foundation/Google Inc. has supported organizations for positive social change since 1976. RMF originally partnered with Tides Foundation during the devastating floods of 2010 during which, with funding from Google Inc., 12 outreach medical camps were conducted over 8 weeks and 20,304 men, women and children benefited from free quality healthcare services. The success of this intervention enhanced with the transparent, timely reporting led to issuance of a second grant which will fund the exit strategy of the RMF-HF Primary Healthcare clinic in Balakot. A successful exit will highlight our project’s unique 5 ½ year success story.

Our exit strategy can be outlined as a two-phase process. The first phase involved discussions with key community leaders to float the idea of a piloting a community health micro-insurance scheme and gauge the community response. This phase was conducted in a series of meetings and interviews by the RMF and Hashoo staff held during August and September 2011. Simultaneously the clinic operations were trimmed down slightly in terms of staffing, their RMF sponsored boarding and lodging, and charging a nominal OPD fee. Unfortunately, the results of Phase I were disappointing in terms of the lack of community cooperation and cohesion based on differing ethnic   and social divides and basic disagreement over the economic capabilities of these communities to participate in a pay for insurance scheme. The ability of a micro-insurance fund to operate successfully in a collection of small poor rural communities with no unifying agricultural or labor unions is a bigger challenge than originally envisioned.  The challenges of fee setting, fee collection, and large scale participation (only works with very large pools of participants) in this type of location is not currently viable.  Most micro-insurance schemes studied as part of this project in developing countries have been either located in highly populated urban areas or rural areas that have large unifying Agricultural Co-ops that offer centralized organizations to administer insurance.   These conclusions have led to Phase II of the exit strategy.

In Phase II, the clinic was further trimmed down to a residual skeletal staff, the small treatment fees were raised and high quality medicine made available at subsidized rates. Simultaneously networking with the Ministry of Health of KPK and its district level health department was initiated. The purpose of interaction with the local health officials was to chalk a way forward toward re-vitalizing the inoperative Basic Health Units in Talhatta thereby augmenting the government healthcare system and ensuring that the community is not left bereft of healthcare services.

2- Months Consolidated Morbidity Report from August to September 2011
From August 1st to September 30th, 2011, 1,603 patients were diagnosed and treated at the Basic Health Unit Talhatta. During the 2 months under review, the figures show that the patients visiting the unit consist of 39% males and 61% females.  12% of the overall patients were children.
In these 2 months, 66 women came for antenatal visits, 96 women visited the health unit for gynecological problems, and 35 women visited the RMF-HF health unit for family planning.

Cases of suspected meningitis (10), acute abdomen (11), burns (6), acute appendicitis (8) and acute jaundice syndrome (13) were less frequent. These cases were subsequently referred to secondary and tertiary care hospitals for further treatment.
10 to 15 patients are benefiting from home consultations each month.