The second anniversary of the devastating earthquake came and went by with no more than a whisper of its mention. A few sporadic news articles focused on remembering those who lost their lives were found in the local dailies. Pakistan is too busy in balancing its unstable political situation and fragmented judiciary to give any attention to those survivors living out their shattered lives.

Real Medicine Foundation strives to be one of the few that still extends its hand of care, long after the disaster is over and forgotten by the rest of the world. The Talhatta healthcare clinic is operating on full swing with a current OPD of nearly a hundred patients every day.

In the past two months, HOAP, our collaborating NGO in Pakistan has merged with a larger philanthropic organization called Hashoo Foundation. The merger fortunately was without any major change in personnel, programs or commitments. The chairperson of HOAP, Ms Sara Hashwani will now function as the Chairperson of Hashoo Foundation but the Chief Executive Officer has been replaced with Dr. Imam Yar Baig. The MOU between RMF and HOAP remains unchanged except for the name, as is the staff set-up of the clinical unit.

Dr. Zeba Vanek of UCLA made Pakistan the destination of her summer holidays this year. She came charged with energy focused on rehabilitating the paraplegic victims of the earthquake. We spend three hectic weeks meeting up Hamid Jaffer of a Karachi-based organization called CHAL, professionals from the AFIRM (Armed Forces Institute of Rehab Medicine) Rawalpindi and Dr. Bakht Sarwar of PIPOS (Pakistan Institute of Prosthetic & Orthotic Sciences, Peshawar. CHAL is committed to extend rehab services to physically challenged persons, and is working closely with AFIRM to build capacity and reach out to SCI patients registered in the PIPOS (Pakistan Institute of Prosthetic & Orthotic Sciences) Rehab Centre in Balakot and Bagh. Positive meetings paved the way to setting up a proposal to address the comprehensive rehabilitation of SCI patients to become independent and productive members of society. Dr. Zeba, with her boundless compassion for these vulnerable people, is currently raising funds to make this proposal a reality.

Pakistan is in political turmoil. Civil unrest in the Swat district of the northern province of Pakistan caused by the invasion of Taliban-backed forces has led to common citizens to flee their homes. Dr. Khifayat’s (our doctor in the clinic) family was one of these unfortunate people who have been forced to take refuge down south in Lahore. Therefore, Dr. Khifayat was compelled to resign to enable his family to settle in their new home. He has decided to take advantage of this transition by pursing his post-graduate training in Orthopedics in Lahore. We take this opportunity to wish him all the luck in his future endeavors. Luckily a new doctor, Dr. Mohammed Ayaz was hired immediately and our OPD continued without a break.

The massive earthquake that struck Northern Pakistan on October 8th, 2005 caused death and devastation at an unprecedented scale. Everywhere, buildings have collapsed and landslides have blocked access to remote Himalayan valleys, leaving people without shelter, food and healthcare.

The Real Medicine Foundation's Team Asia has been working in collaboration with the HOAP Foundation in Pakistan's capital Islamabad, an organization which has been running emergency relief operations on the ground ever since the October 8 earthquake killed more than 80,000 persons and left more than three million without shelter. The relief efforts have been targeted at the worst-hit areas and have offered services like food, clothing, shelter, tents and medical camps.

A team of volunteers comprising of Dr. Giorgio Pietramaggiori of Boston's Brigham & Women's Hospital, Dr. Fabian Toegel, Dr. Helen Ouyang and Mr. Omar Amir from the Harvard School of Public Health flew to Pakistan for several weeks in January 2006 to help set up medical camps in collaboration with the HOAP foundation.

How Real Medicine is colloborating with UNICEF, Oxfam and the World Health Organization: 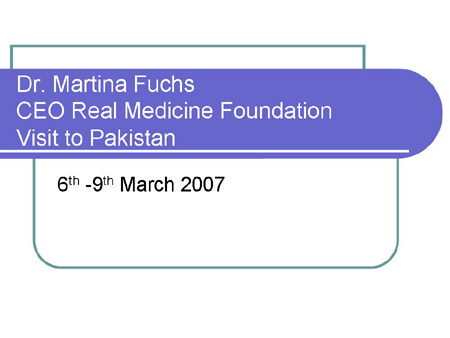 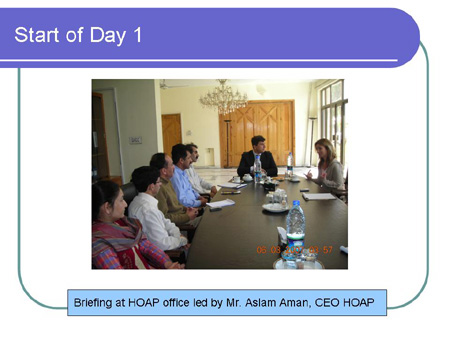 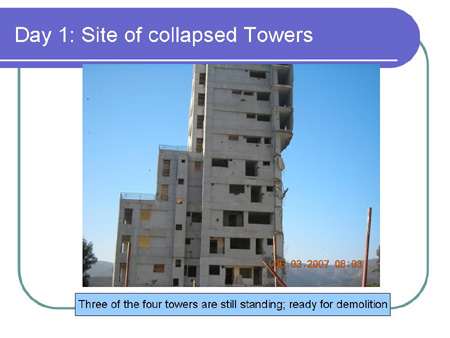 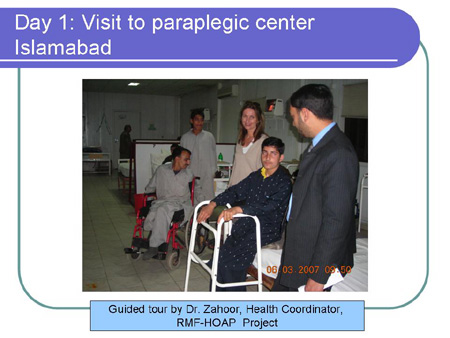 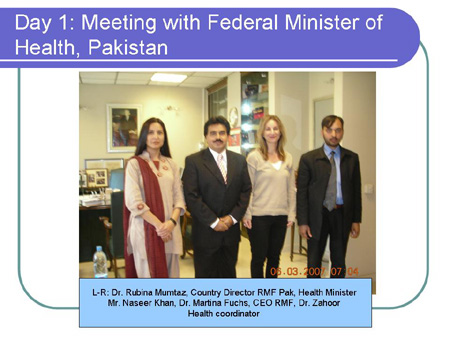 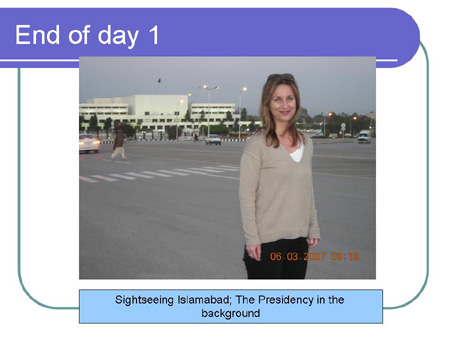 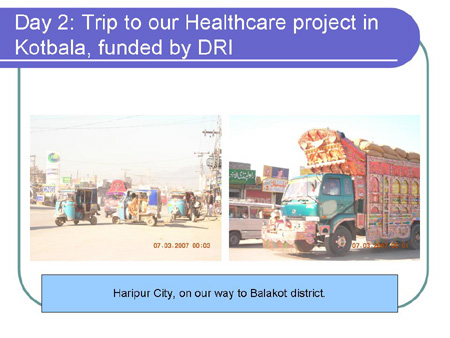 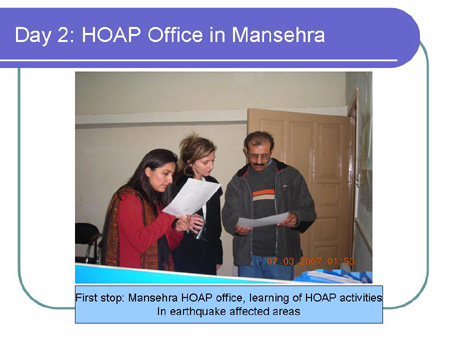 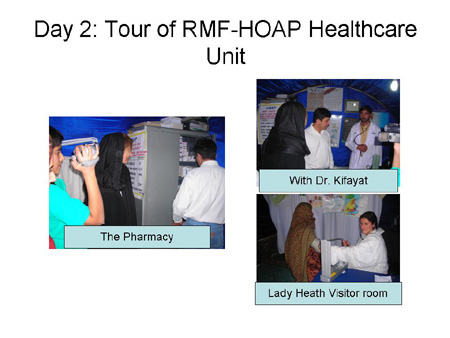 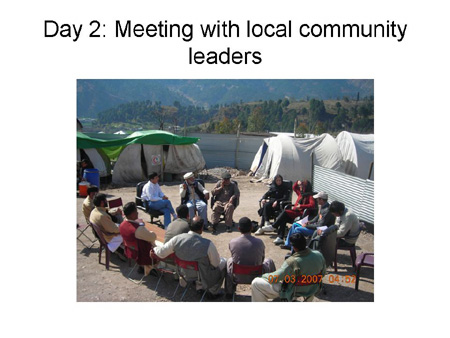 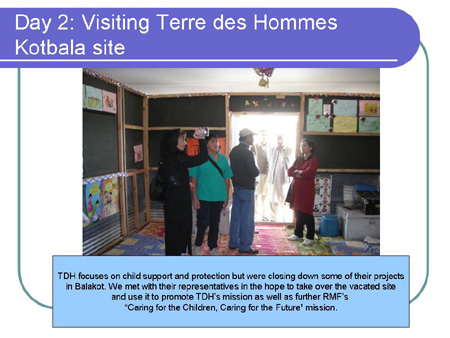 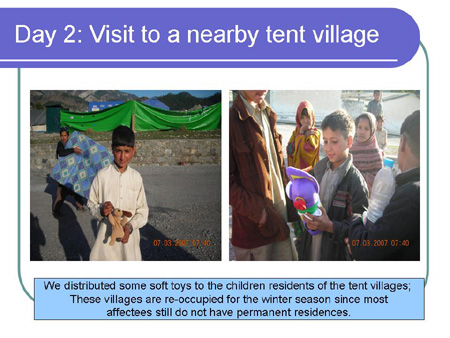 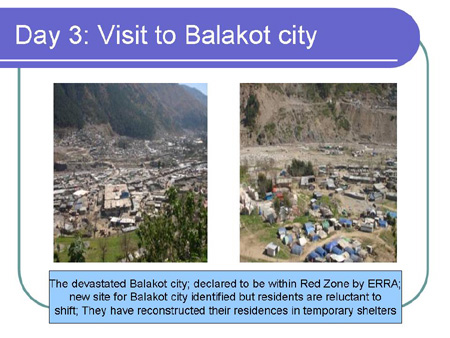 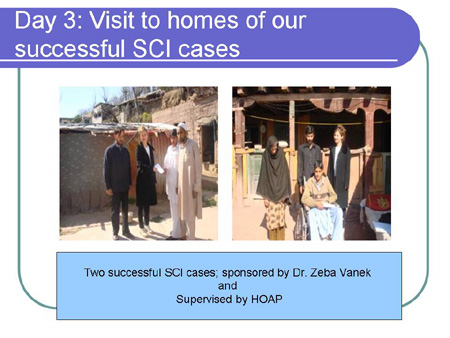 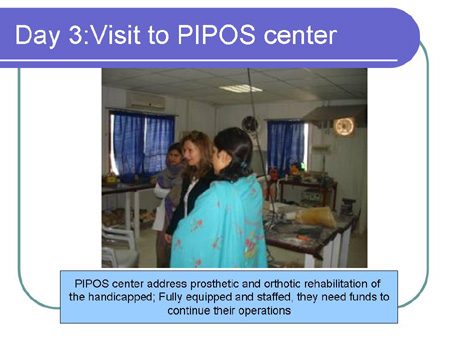 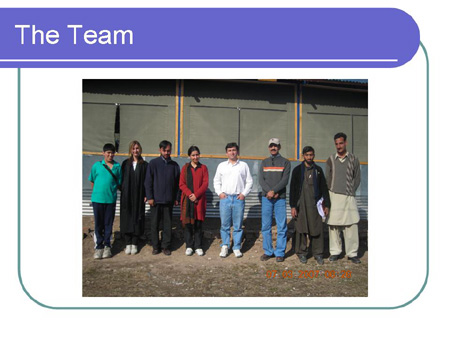