March was an exciting month. Dr. Martina Fuchs, CEO of RMF, visited Pakistan for the first time. Five hectic but memorable days were spent visiting finally seeing the transformation of her vision into reality. It was also the first time Dr. Fuchs actually met the Pakistan team and the general sentiment was quote "like I've always known you" unquote.

Landing in Lahore meant that it took Dr. Fuchs an additional five hours to finally reach Islamabad towards midnight on 5th March 2007. The next day, after a briefing at the HOAP office, Dr. Zahoor, Health Coordinator for RMF-HOAP project spend the morning taking Dr. Fuchs for a guided tour of the site of the ill-fated Margalla Towers that collapsed during the earthquake as well as the paraplegic center in Islamabad. In the afternoon, the Federal Minister of Health, Mr. Mohammed Naseer Khan was kind enough to give us an opportunity to thank him personally for all his cooperation with RMF and HOAP in the past year. He was particularly impressed with the extent of RMF's work on the international front. 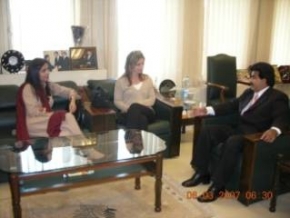 In the wee hours of the following day, we set out for Balakot but first made a stop at the HOAP branch office in Mansehra where a brief outline of all HOAP's activities in the earthquake affected areas was discussed. Finally by mid-morning, we reached the RMF-HOAP Primary Healthcare Unit at Talhatta. An emotionally gratifying tour of the facility was conducted by the enthusiastic staff of the unit. A meeting with the local leaders of the surrounding communities was scheduled in the afternoon by the staff but all the invitees showed their enthusiasm by turning up early in the morning.

The community leaders expressed their gratitude to Dr. Fuchs for not only providing the only healthcare facility within the vicinity of four union councils at the time of dire need immediately post-earthquake but also being the only facility to continue their aid long beyond the emergency situation. They appreciated the dedication and care with which the staff carries out their duties. However, they named two main gaps in the healthcare as the lack of a MCH center and pathology lab. These facilities are found nearest in the neighboring towns of Mansehra and Abbottabad, both of which require time and money to access, thereby rendering them ineffective in this poor and underprivileged community. Dr. Fuchs agreed with the dire need for these requirements and promised to make an effort to address them.

Following a sumptuous lunch at the camp, Dr Fuchs was introduced to two individual cases that needed medical support only available at a tertiary care hospital.

The afternoon was spend visiting a neighboring site recently vacated by Terre des Hommes, (TDH), an organization focused on providing protection, support and improving the lives of disadvantaged children in their own environment. Meeting with their country representative in Mansehra was conducted in the hope to take over the vacated site and use it to promote TDH's mission as well as to use it to further RMF's 'Caring for the Children, Caring for the Future' mission.

On 7th March, the team drove over to the devastated city of Balakot which has not been reconstructed because it is within the red zone, as per ERRA's geological reports. The red zone indicates high tectonic plate activity thereby ill-advised for human inhabitation. A proposed new site for Balakot city has been nominated but the residents have shown considerable reluctance to shift and are therefore living in temporary makeshift homes on the original site. A visit to the homes of our successful SCI patients who are currently sponsored by Dr. Zeba Vanek was the last stop before driving back to Islamabad.

On the last day, a meeting with the HOAP office staff and the CEO of HOAP, Ms. Sara Hashwani resulted in a fruitful continuation of our collaboration. Dr. Martina Fuchs drove down to Lahore to fly to India to continue her tour of RMF projects Asia.