The first anniversary of the earthquake and HOAP-RMF embraces this day on a note of hope and a sense of fulfillment of having achieved some of our goals, although there is so much more to be done. The month of September has been full of exciting events. Denise Allison of Pay It Forward Project and Marc Gold from 100 Friends partnered with RMF to introduce a livelihood program for the families whose sources of income have been affected by the earthquake. Most families targeted were within the vicinity of the Jabri village but some were found all the way down in Islamabad. The first phase of this project has been very successful with Denise and Marc camping it out at the Jabri clinic site and personally meeting with the selected families and responding their specific needs.

The HOAP-RMF Primary Healthcare Unit has successfully met one of its most important objectives which was to provide medical care to the community until the government and local community could take over the previous health care apparatus after they have recovered sufficiently from the earthquake. The BHU (Basic Health Unit) in Jabri has been rebuild by the Government in collaboration with WHO and is staffed to become fully functional by next month. This wonderful development led to RMF and HOAP’s decision to move the clinic’s location down to a village called Kotbala that is located at the junction of Union Council Shawal Muizullah and Union Council Talhatta. Here the previous government health care apparatus (RHC-Rural Health Center) has not yet been restored and is expected to remain non functional in the near future. Kotbala was the site of the HOAP base camp during their post-earthquake emergency relief efforts of distributing food and tents. There are several advantages that influenced the selection of this location.

Negotiations with the owner of the land, Mr. Mumtaz Shah have been finalized and the process of transfer of structure from Jabri to Kotbala is already underway.

RMF team, Pakistan has established an office in Islamabad and participated in providing a one-day free medical camp for the affectees of the recent floods that occurred in the NWFP province during the monsoon season in August. The Federal Minister of Health, Mr. Nasir Khan who has always taken a keen interest in RMF’s activities post-earthquake was kind enough to respond to our appeal by generously donating the medicine required to successfully carry out the free medical camp. HOAP arranged a team of 13 volunteer doctors of from several Islamabad based hospitals. The camp was set up on 9th September 2006 in Mardan, the most badly affected town, in a local public school on Sidghar Road, Mardan. A record of 2065 patients were seen in a single day. Local newspapers published the event which was publicly appreciated by the Nazim (Mayor) of Mardan.

Denise Allison and Rubina Mumtaz in the RMF office, Islamabad: 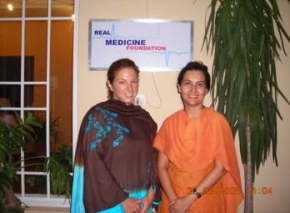 The newly reconstructed Government BHU in Jabri in collaboration with WHO and other international Organizations:

The free Medical camp set up on 9th September 2006 in Mardan for flood affectees: 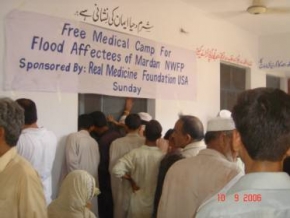