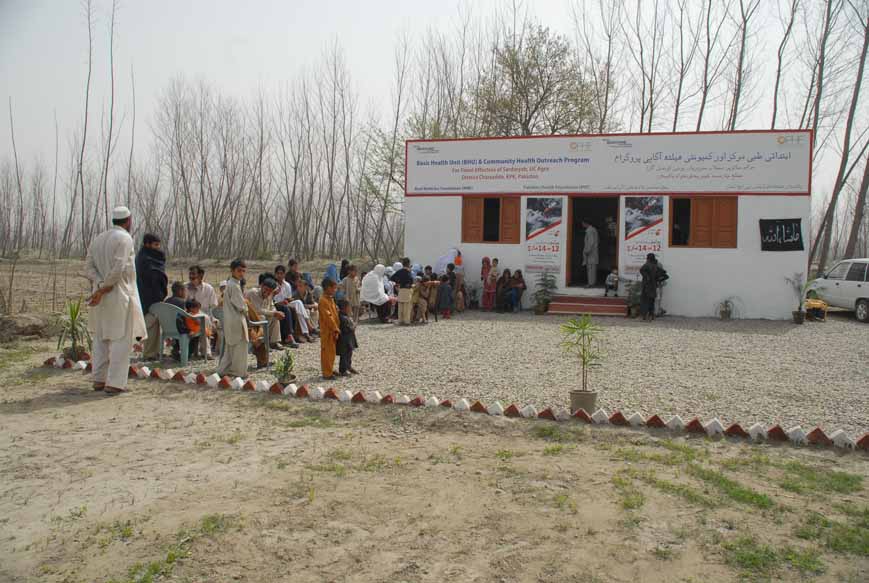 Photo: Patients line up to be seen at the new health center

Unprecedented monsoon rains in 2010 caused devastating floods that affected up to 20 million people in Pakistan in what is now officially recognized as one of the country’s worst natural disasters in scale. The province of KPK (Khyber Pakhtunkhwa)was the most severely affected in terms of destruction, massive damage to infrastructure and property was sustained. Against a backdrop of recurrent natural and human-made calamities in this province – including the protracted fighting and mass displacement witnessed in 2009 due to the Taliban invasion of Swat – the long term effects of the floods threaten to entrench food insecurity and poverty in KPK. Within KPK, the District Charsadda was the most affected because of its close proximity to the Kabul and Indus Rivers. 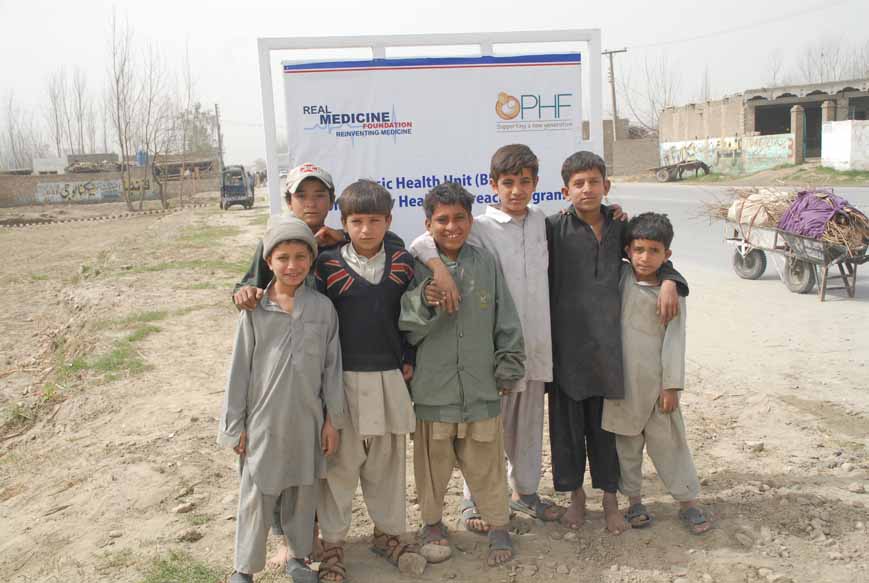 According to the UNOCHA (Office for the Coordination of Humanitarian Affairs) report of 2012, Union Council Agra has been identified as one of the most flood-devastated areas within Charsadda District which still stands in need of aid in all areas of development, including health. Therefore, RMF has joined hands with Pakistan Health Foundation (PHF) UK and signed an MOU to provide comprehensive primary healthcare to the people of Union Council Agra.

Photo: Sign on the main road for the RMF/PHF Healthcenter and Doctor with new patient

Pakistan Health Foundation UK (PHF) is a non-for-profit organization founded in 2011 by a group of members from the Rotary Club Reading, UK and its mandate is to work exclusively on health issues for the poor and vulnerable people of Pakistan. With funds from their first fundraising effort, PHF purchased a small plot of land in UC Agra located centrally on the main Charsadda Road where public transport is easily available; PHF proceeded to lay down the foundation of a hospital they envision will one day grow into a fully integrated and comprehensive MNCH Center for the poor and vulnerable women of this area. 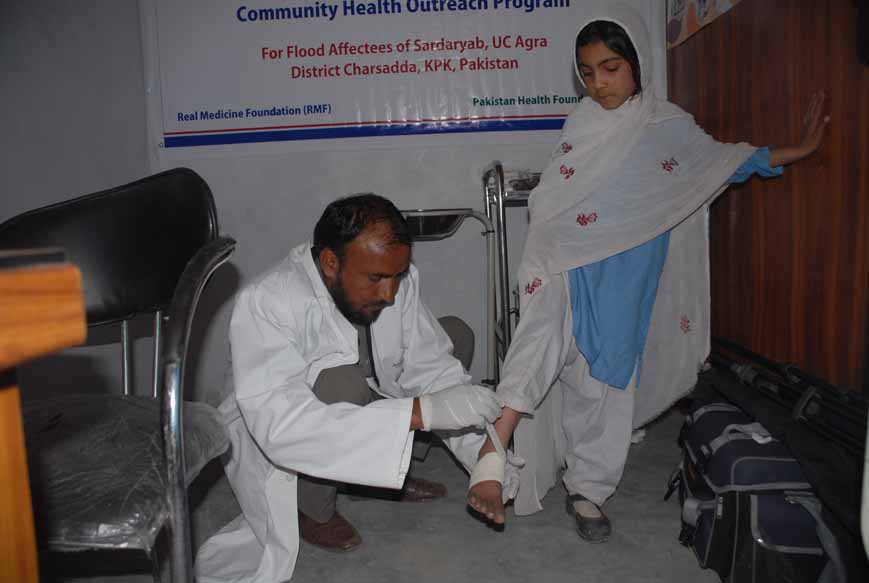 Funds were sufficient to just build a small portion of what will eventually be the main ground floor of the hospital but it suffices to set up of a complete primary health center. The MOU between RMF and PHF defines clear roles for the two organizations; whereby PHF is responsible for providing rent-free the building structure inclusive of running water, sanitation and drainage, electric and gas connections; it will also be responsible for constructing of additional wings/stories to the building. RMF is responsible for complete operations of high quality primary healthcare with a special focus on MCH services.

Project Goal:   To improve the health of the people, especially women, living in Union Council Agra which is one of the worst floods affected Union Councils of District Charsadda, thereby contributing to the achievement of the MDG goals of reducing maternal and infant mortality in Pakistan.

RMF set up the physical infrastructure of the health center in Agra in the second half of February 2012 and began seeing patients as of March 1st, 2012. Currently, due to budget constraints, only the component of primary healthcare is implemented. However, the need for this health service is dire, exhibited by the current OPD of nearly 50 patients within the first week of operations. As usual, the most in-demand health service is the MCH care provided by the LHV (Lady Health Visitor), making it essential that a comprehensive MCH component is implemented as soon as is possible. The demand for all health operations far exceeds our budget and donations for the Agra Health Center are welcome.