From October 1st, 2011 to November 30th, 2011, 2,402 patients were diagnosed and treated at the RMF- APPNA Basic Health Unit Gulbella. During the 2 months under review, the figures show that the patients visiting our clinic consisted of 31% males and 69% females.  13% of the overall patients were children. 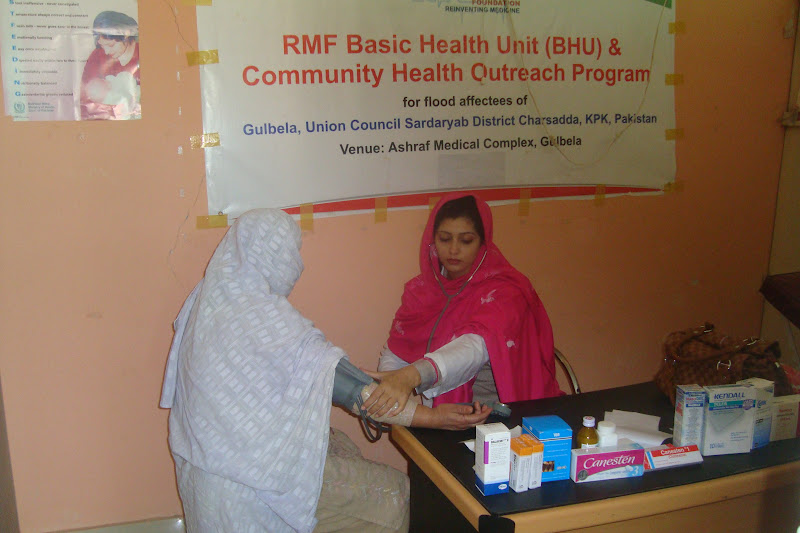 Most of the diseases diagnosed and treated result from the weather and living conditions of the patients:

143 cases were subsequently referred to secondary and tertiary care hospitals for further treatment.

Saleem was a patient who came to our Clinic on the advice of another patient who had recently received successful treatment. Saleem is a 27 year old male from Shabqadar and arrived with symptoms of headaches, fever, chills, and stiffness for the prior three days. Upon arrival at the RMF BHU he presented with a high grade temperature of 103F, a pulse of 110/min but was otherwise hemodynamically stable.

On the inquiry of our doctor, the patient explained that his fever was followed by sweating, mild headache and all of his body parts aching. The patient was given antipyretics to relieve his fever and the staff nurse took his blood sample for a quick Malaria test with the sample sent to a local laboratory for rapid testing. The patient was provisionally diagnosed with Malaria and our doctor waited for the laboratory result, which was confirmed as Malaria 3 hours later.

Malaria is one of the 10 most common causes of death across the globe, even today, causing millions of deaths around the world each year, especially in Africa. People of all ages are affected.  In the case of Pakistan, the situation is grave. Due to the flooding of 2010, large areas of the country remained submerged in water for months, which resulted in many stagnant pools of standing water. In combination with the heat, these pools are powerful incubators of the Malaria carrying mosquitoes, Anopheles, that breed and hatch in the pools. According to recent surveys, millions of people in Pakistan are now prone to Malaria due to these devastating floods which also destroyed the few health facilities available in the rural areas.

Our physician gave Saleem Quinine tablets and asked him to take four immediately, two more 6 hours later, followed by one tablet for the next 3 days. He also gave him Paracetamol tablets three times a day and advised him to take plenty of rest.  Saleem was also asked to visit the BHU for follow up the next week.

Four days later, Saleem visited the BHU and was very happy to inform the doctor that he had almost completely recovered. Saleem explained that Malaria has become very common in his community, as the people are very poor and cannot afford the transportation and medicine costs. He requested the BHU’s staff to establish a long term setup in the region.

Shafiq is a poor resident of Union Council Gulbella who works in a sugar cane farm in Charsadda receiving only Rs. 6000 a month. He has two daughters and a son. He and his wife recently visited the RMF-APPNA BHU along with their 11 year old son Akbar and told the Medical Officer that Akbar had been complaining of abdominal pain for the last few days. He was having loose bowel movements, his temperature usually rose in the morning, and he had occasional episodes of vomiting.

Being very poor, he had been unable to immediately take Akbar to the local hospital in Charsadda or Peshawar. Shafiq said that he had been planning to take him to the hospital after receiving his salary in a week’s time, but was very worried as Akbar was getting weaker day by day and his situation continued to deteriorate. The father also told the doctor that someone had given them pain relieving medication but that was only giving him a temporary relief from pain.

In Shafiq’s words: “I was lost with no way to get my child treatment, but a person in my Muhallah (town) told me about this RMF-BHU last night, that is why I brought him here early in the morning.”

After taking a careful medical history of Akbar, the symptoms and physical examination revealed that he was suffering from Acute Gastroenteritis and Cholera. The doctor immediately gave him an injection of N/S 1000 ml, Inj. Rocephine I/VBD and Infusion of Flagyl 100ml, and for oral treatment the patient was given, Vibramycine, Gravinate, Panadol tablets and ORS.

The father was also advised to bring him again for follow up in two days.  Shafiq visited the BHU again on the third day as advised by the doctor, and this time was very happy for his son. He informed us that Akbar had started recovering quickly. He told the doctor that last night was the first night after many days that they and their son could sleep comfortably. Shafiq thanked the doctor and said that he is happy to see his son recovering again. He said that if he had waited for his salary his son could have died, as he had no other source of money to give his son the due treatment. 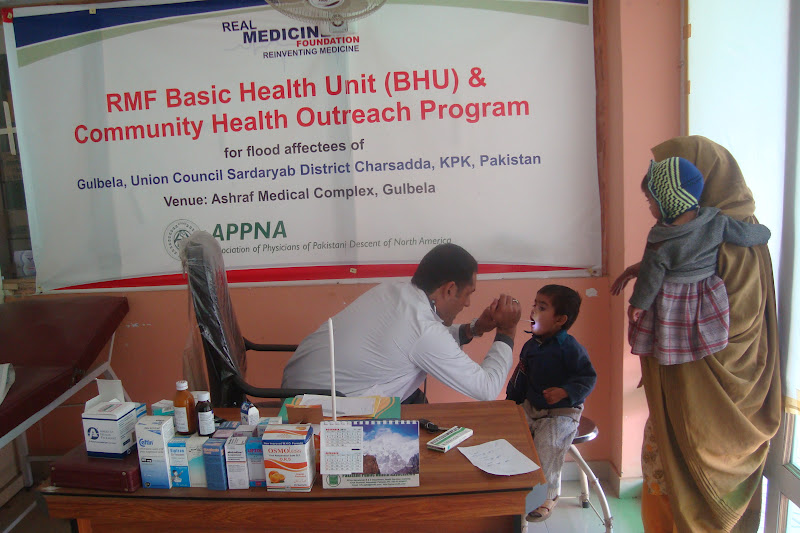 From its beginning in December 2010 in UC Gulbella, the RMF-APPNA BHU has treated more than 15,000 patients. Patients are for the most part women and there has been a steady increase in the number of Maternal Child Health consultations.

RMF, APPNA and GDF also aim to ensure continuity of the BHU services to flood affectees in our BHU Gulbella. Our Lady Health Visitor (LHV) is taking care of the gynecological and obstetric cases in the BHU. She is also collaborating with other Lady Health Visitors and trained Community Health Workers.

This project improved women and children’s access to primary healthcare in this remote region. The BHU is handling cases of common prevailing diseases, gynecologic and obstetric cases and refers any cases needing advanced care to the secondary and tertiary care units in Peshawar in a timely manner.

The success of our interventions receives a remarkable response from the community, whose hearts and minds had to be won. Our project staff tirelessly dedicates their services to this great development cause.