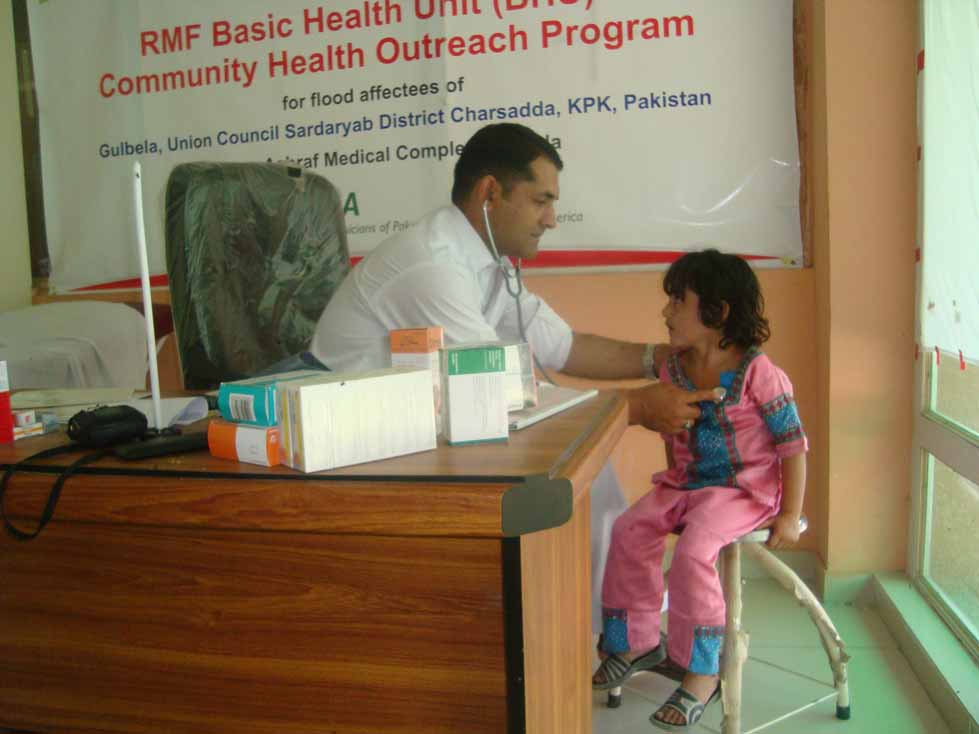 The devastating flood during the monsoon season of 2010 created havoc over a wide area across Pakistan. Although the flood affected the lives of thousands of families and individuals in each province of the country, due to Charsadda District’s close proximity to the Kabul and Indus Rivers, the long term damage has been more severe in this area.

The destruction of most of the health facilities and the already weak economic condition of the region has made the inhabitants even more vulnerable to health problems. In light of the critical situation in Charsadda, Real Medicine Foundation decided to establish a Basic Health Unit (BHU) in the town of Gulbella, in the Union Council of Sardaryab for a period of at least six months to serve the flood victims of the region.

RMF in collaboration with the Association of Physicians of Pakistani Descent of North America (APPNA) has started this Basic Health Unit (BHU) aiming to provide free health services for the flood affectees.

The BHU was inaugurated officially on December 19, 2010 by RMF Country Director, Dr. Rubina Mumtaz. On the very first day of opening, health care was dispensed to 57 patients and since then, the BHU provided high quality primary health care services for the next 14 months. In the absence of any other functional health facilities in the area, the RMF BHU served the neighboring Union Councils of Naguman, Sardaryab and Agra as well.

The RMF CIPHC Model components of Primary Health care and Community Outreach was implemented in Gulbella.

The PHCis comprised of the physical Infrastructure, human resources and a referral system.

Referral System: The RMF staff created links with functional THQ (Tehsil Headquarter) and DHQ (District Headquarter) hospitals in the main cities of Charsadda, Mardan and Peshawar. Personalized links with different departments of these secondary and tertiary level hospitals were established due to our free medical camps where many young enthusiastic doctors chose to spend their weekends volunteering or working on a minor daily stipend providing healthcare; most of these doctors’ main jobs were in the THQ and DHQ Hospitals. 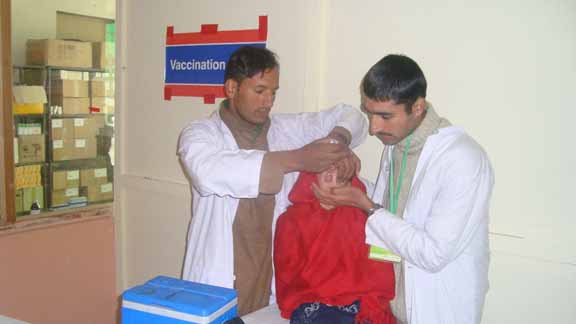 Preventive Health Education is an integral component of the RMF BHU Model. It is a constant ongoing process starting from the patients visiting the BHU and augmented by community visits to far flung and remote parts of the field area.

Within the BHU: It begins with the waiting room of the BHU which has IEC material, mostly in pictorial format and if necessary in local languages placed in easy to read and reach locations in the waiting area. This includes posters on the walls and pamphlets on the stands placed in strategic corners such as on the reception desk and the drinking water source.

The doctor and the LHV are trained to impart preventive health education messages as part of their patient care, especially in relevance to the patients’ presenting problems, if applicable.

During its fourteen months of service in the area, the RMF BHU was able to do tremendous work in terms of treating the ill and raising awareness about hygiene conditions for prevention of common health problems.

Gender distribution: A total of 15,763 patients were provided healthcare services.  65% of patients were woman, 35% men, and 11% children.

The number of women coming in for family planning fairly increased during the tenure of the RMF BHU services in the area. This alone is a testament to how the BHU made efforts to improve the life standards of the people of the area.
Disease distribution: The disease-wise breakdown of the patients who visited the RMF BHU is as below:Referral cases:  An average of 15-20 patients were referred to the nearest secondary and tertiary level hospitals, mainly in Peshawar which remained relatively untouched by the floods. A total of 209 cases were referred during the project period. Cases for referral included, but were not limited to, appendicitis, suspected mumps and meningitis, burns, unexplained acute abdominal pain, cases of angina and myocardial infarcts, acute jaundice syndrome, complicated pregnancies and post-partum hemorrhage. 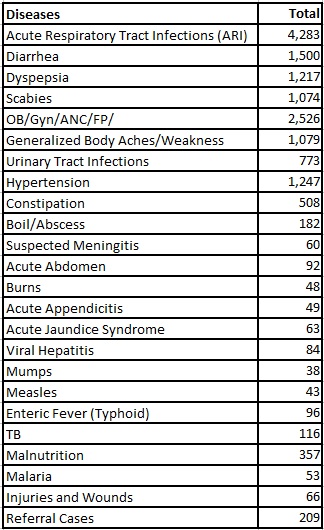 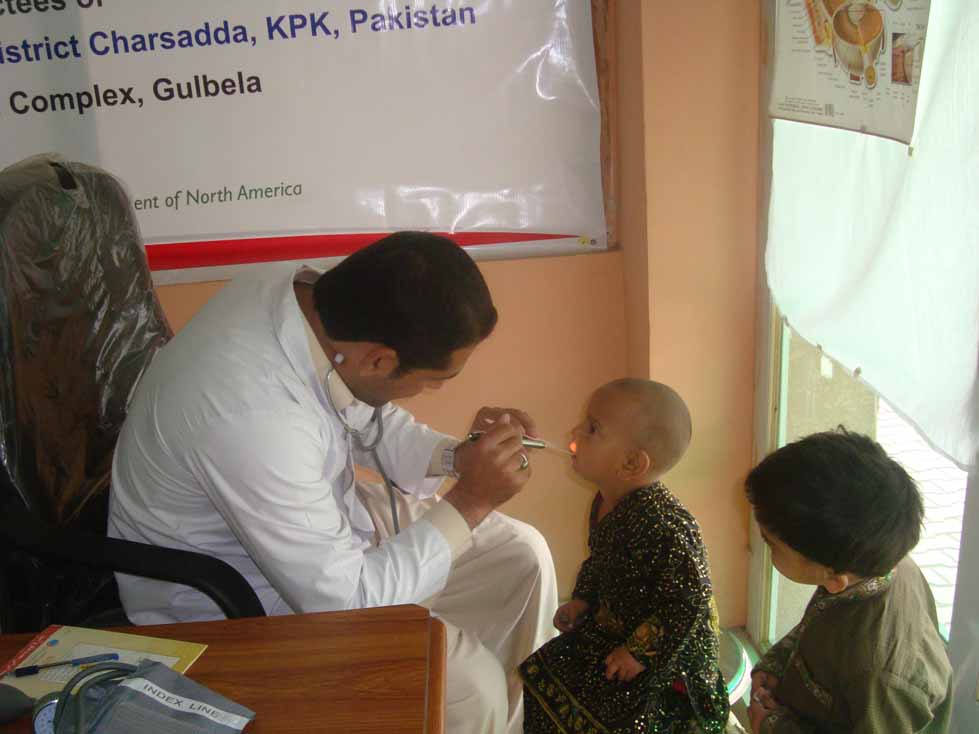 Since any efficient and well-equipped health facility was lacking from the area even before the floods, the RMF project managed to generate substantial goodwill with the local residents. The community as a whole expressed extreme satisfaction with the services provided to them as well as appreciation of the diligent and cooperative attitude of RMF’s medical staff.

Mr. Iqbal Hussain was one such patient who came to the BHU with complaints that seemed minor in nature. However, after examination, the medical staff learned that his problem of urine retention stemmed from severe problems and he was immediately referred to Lady Reading Hospital in Peshawar. He was provided assistance with the transport to Peshawar in the beginning as well as during treatment. Once discharged from the hospital, he came back to express his deepest regards to the staff who had helped him resolve his long-standing health problem, and enabled him to resume a normal life. As the sole bread winner of the family, he was relieved to be able to go out and earn a decent living for his family again.

Nauman Khan was brought to the BHU in critical condition; he was unconscious after ingesting medicines in a suicide attempt. The staff at the BHU reacted immediately by washing his stomach, and gave him IV fluids and antibiotics as well. Nauman was closely monitored during the next two hours and was let go only after ensuring that he had fairly recovered from the ordeal. His family was advised to seek counseling for Nauman and referral was made to the psychiatric department of Lady Reading Hospital Peshawar. Nauman’s family expressed their very deep gratitude at the prompt services provided by the staff at the BHU.  Follow up on his counseling were not possible as the family returned to their home.

When Saleem’s mother brought him to the BHU, the boy was suffering from high fever and fatigue. Since his father was a factory worker in Rawalpindi, he was not able to earn much and the family was living hand-to-mouth. The mother had brought her son to the BHU in dire straits since she had no money and the medicines she had given him earlier had not worked. The staff at the BHU however, examined the boy who had a really low blood pressure and very slow heart rate. The boy was immediately cold sponged to bring down his fever and given appropriate medicines for typhoid fever. After seven days, when the mother and son visited the BHU again, they were relieved and happy to have been treated with such good care and patience.

Salim Khan was referred by another patient, who had received treatment from the BHU and had left feeling satisfied. When Saleem Khan came he was suffering from high fever and some other symptoms that led the medical staff to run tests for malaria. Within three hours, the diagnosis was confirmed and he was given the appropriate medications.

Shafiq has a family of five to feed and as the only bread winner of the family, he was under dire pressures continuously. When his son, Akbar fell ill complaining of severe abdominal pains, he did not know where to turn to. He was waiting for the day when he would receive his salary so that he could take his son to a health facility. Just at the brink of this helplessness he was advised by a neighbor to take the child to the RMF BHU. As soon as he arrived at the BHU, the medical staff examined his medical history and diagnosed and treated him for cholera. After that the boy was on his way to full recovery and the whole family expressed their happiness for such a smooth turn of events.

The three Union Councils and the adjoining areas are replete with stories of patients and aggrieved people, that were treated at the BHU and who were also given great hope in times of real helplessness.

As per the ambition of RMF, the organization served the most deserving people of this area  that was stricken with loss of life, livelihood and tragedy following one of the most devastating floods in South Asian history. RMF has the honor and opportunity to attend to the health needs of this community with diligence and sincerity.

However, the IDPs living in government tent camps slowly began to return to their homes to pick up on their lives from scratch. The Government of KPK dug deep into its pockets and with aid from different donors began rehabilitation of the destroyed infrastructure. Part of this rehabilitation included revitalization of the health facilities inclusive of BHUs. The BHU in UC Sardaryab was revitalized towards the end of 2011.  As per our mandate, once the government is capable of taking over its role for health provision post-disaster, our mission in the area has been achieved and the RMF BHU began to wind up operations and came to a close in mid-February 2012.

A non-for-profit organization called Pakistan Health Foundation  UK (PHF) was founded in 2011 by a group of members from the Rotary Club Reading UK to work exclusively on health issues for the poor and vulnerable people of Pakistan. With funds from their fundraising efforts, PHF chose to start their mission with the flood affected areas of KPK. UNOCHA (Office for the Coordination of Humanitarian Affairs) has declared “Agra” as one the most devastated Union Councils of the flood affected areas of Charsadda District. Hence, PHF selected Agra as its first field area and with the help of RMF staff, purchased a small plot of land identified on the basis of easy access and available budget.

This is located centrally on the main Charsadda Road where public transport is easily available; PHF proceeded to lay down the foundation of a hospital they envision will one day grow into fully integrated and comprehensive MNCH Center for the poor and vulnerable women of this area.  Funds were sufficient to just build a small portion of what will eventually be the main ground floor of the hospital. Currently it suffices to set up of a small OPD Health Clinic.