Background Basic Health Unit (BHU) in Gulbella District, Charsadda:
Gulbella plays the role of a hub for the other three nearby Union Councils, Naguman, Sardaryab and Agra of District Charsadda. It is located on the bank of the Kabul River some 20 kilometers towards the north on the Peshawar-Charsadda road. 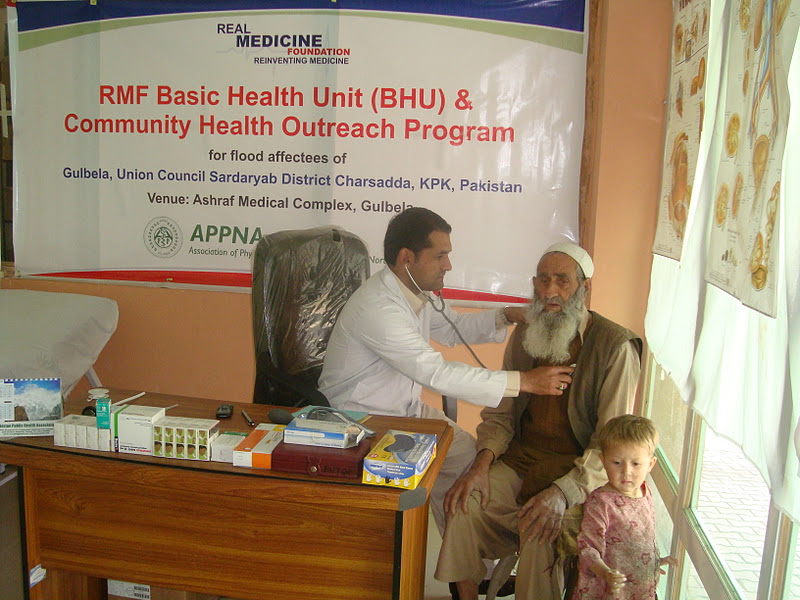 District Charsadda itself is an important district of Khyber Pakhtoonkhwa Province. There are three rivers flowing in the territory; the Jindi, Swat and the Kabul.  Currently the population of the district is over a million people. Livestock is one of the most important and the main sources of income for the inhabitants of the region. Generally the people of the region are poor and literacy rates are very low.

The unusual and torrential rains in the region during the monsoon seasons of August 2010 resulted in the flooding of all the rivers, which created havoc in the country in general and Charsadda in particular. Charsadda was the most affected district of Khyber Pakhtoonkhwa province because all three rivers flowing through the territory overflowed and washed away everything that came in their way. Hundreds of houses and buildings were razed to the ground, schools destroyed and bridges damaged. 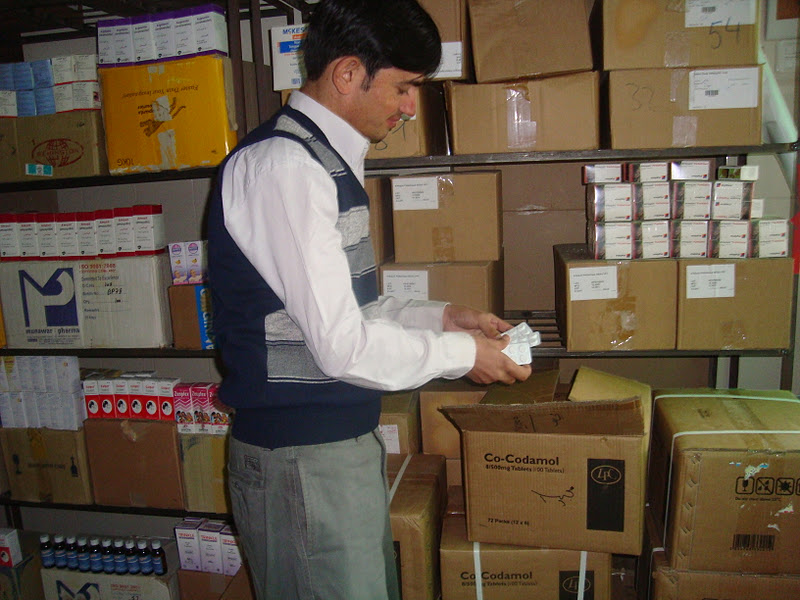 Health related facilities in the area:
There are few health facilities available in the district, which includes a District Headquarter Hospital (DHQ) in Charsadda, THQ hospitals, a few medical centers for TB and Diabetes, and some clinics or Basic Health Units (BHUs).  The few BHUs located in Charsadda have very little medical equipment. The local population has always complained about the shortage of medicine and other supplies in these health centers. The flooding has made the situation even worse.

Provision of Health Facility by RMF in collaboration with APPNA:
In light of the critical situation in the district, Real Medicine Foundation (RMF) in collaboration with the  Association of Physicians of Pakistani Descent of North America (APPNA) established a Basic Health Unit (BHU) in Union Council Gulbella, Sardaryab in Charsadda, aiming to provide free health services at the unit for the flood affectees.  The Basic Health Unit (BHU) was established in the very short period of time of 7 days and was formally inaugurated by Dr. Rubina Mumtaz, Country Director Pakistan, on the 20th of December, 2010.  Since its inception, the Basic Health Unit (BHU) has been providing for the underserved population of the area, and now treats an average of 50 patients per day.

In this reporting period, 73 women came for antenatal visits, 171 women visited the BHU for gynecological problems, and 65 women visited the Basic Health Unit for Family Planning advice.
Most of the diseases diagnosed and treated result from the weather and living conditions of the patients:

164 cases were subsequently referred to secondary and tertiary care hospitals for further treatment. 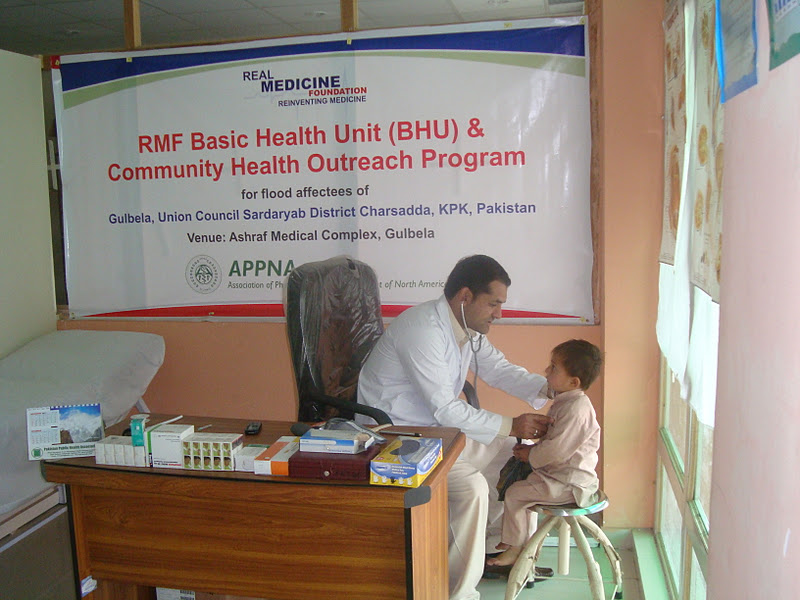 Kaleem
Kaleem is 16 year old resident of UC Gulbella and has a brother and a younger sister. His father is poor and works as a security guard in Peshawar. He receives a very meager salary of Rs 6,000 a month, and with this he has to bear the expenses of his family including the utility bills and school fees of his three children.  Kaleem studies in 9th grade in a local school of UC Gulbella.  One day, after attending school he rode his bicycle to return home as usual. Kaleem had hardly covered a kilometer of distance towards home when a speeding car hit his bicycle. Kaleem was badly injured and was bleeding seriously.

Fortunately, the accident occurred near the RMF-APPNA sponsored BHU/clinic which is located on the same road. The locals of the area rushed the boy to the RMF-BHU for emergency treatment. Upon his arrival at the BHU the doctor immediately applied pressure bandages to stop bleeding from the open wound and injected him with Diclofenac to soothe his pain. The boy had a 6 cm open lacerated wound on his left leg with bruises and bleeding on his right knee joint and he suffered from severe pain. The doctor at the BHU examined him thoroughly and found that fortunately the boy had no bone fractures.

After his pain had subsided, the dresser at the BHU cleaned and stitched the wound and bandaged it with surgical gauze and pyodine. He was also injected with Tetanus Toxoid to prevent any chances of Tetanus.

Kaleem’s father arrived at the BHU in two hours and was very frightened initially, while entering the BHU, but calmed down when he found his son in stable condition. Kaleem’s pains had subsided and his father took a sigh of relief and thanked God.  After 1 hour the doctor allowed the boy to go home with his father and gave him Augmentin 625mg and Artifen 50mg. The medical officer of the BHU advised Kaleem’s father to give him the medicines regularly for 5 days, and advised his father to bring him after one week to remove the stitches.

His father was very happy and thankful to the health staff for helping his child in a critical situation, taking care of a dangerous wound, severe pain and for giving him further treatment. He said that a set-up like this is nothing less than a blessing for the poor people of the area.  He further added that, had there been no RMF-BHU, the boy would have suffered a lot from the injuries, as there is no other emergency or health facility in this area and it’s very expensive to take someone to hospitals in big cities like Peshawar.

Alam Zeb Khan
Alam Zeb Khan is a 35 year old man who works in a flour mill in Peshawar as the gate keeper, and receives Rs 7,000 salary a month. Alam Khan’s native town is Gulbella, Charsadda and he has two sons and two daughters. Due to the sky rocketing prices of daily use commodities Alam can hardly make ends meet.

At the suggestion of a local, Alam arrived at the RMF-BHU on August 19th and was trembling with high grade fever. Upon the inquiry of the medical officer at the BHU, Alam reported that he had been suffering from high fever for two weeks. He said that he had taken different medicines from a local medical technician at his village but they had proved ineffective and the temperature was instead getting higher. Alam further added that at the start he was also suffering from lose bowel movements but that problem subsided after two days. He also informed that he that he was suffering from abdominal pain as well.

The high grade fever and progressive increase in its intensity, headache, abdominal pain, loose bowel movements, and slow pulse rate (relative bradycardia) at the start helped the doctor at the BHU to diagnose the patient with typhoid fever. Typhoid fever, also known as enteric fever, is a potentially fatal multi-systemic illness caused primarily by Salmonella typhi.

The doctor gave Alam Tab. Ciproxin 500mg to be taken two times a day for 7 days and alongside he was given Panadol and asked to take this thrice a day. The doctor asked him to visit back for follow up after five days.    After five days, Alam visited again and he was very happy with the treatment. He told the doctor that the medicines proved effective, and that after taking them for three days, he feels improvement every day.  Alam told the staff in the BHU that due to costly medications and the high transport costs he could not visit the city to see a doctor, which is why he suffered a lot before visiting the BHU.   He said he was very excited for having such a beautiful clean and free medical set-up at his door step now.

Conclusion:
The success of RMF and APPNA’s interventions receives a remarkable response from the community, whose hearts and minds had to be won. Our project staff tirelessly dedicated their services to this great development cause.