Background Basic Health Unit (BHU) in Gulbella district Charsadda:
Gulbella plays the role of a hub for the other three nearby Union Councils i.e., Naguman, Sardaryab and Agra of district Charsadda. It is located on the bank of the Kabul River some 20 kilometers towards the north on the Peshawer-Charsaada road. Gulbella is also a popular picnic spot for the local tourist.

District Charsadda itself is an important district of Khyber Pakhtoonkhwa Province. There are three rivers flowing in the territory; including the Jindi, Swat and the Kabul.  Currently the population of the district is over a million. Livestock is one of the most important and the main sources of income of the inhabitants of the region. Generally the people of the region are poor and literacy rates are very low.

The unusual and torrential rains in the region during the monsoon seasons of August 2010 resulted in the flooding of all the rivers, which created havoc in the country in general and Charsadda in particular. Charsadda was the most affected district of Khyber Pakhtoonkhwa province because all the three rivers flowing through the territory all overflowed and washed away everything that came in their way. Hundreds of houses and buildings were razed to the ground, school destroyed and bridges damaged.

Health related facilities in the area:
There are few health facilities available in the district, which includes a District Headquarter (DHQ) Hospital Charsadda, THQ hospitals and some clinics or Basic Health Units (BHU's).

The few BHU's located in Charsadda have very little medical equipment and a few medical centers for TB and Diabetes. The local population has always complained about the shortage of medicine and other facilities in these health centers. The recent flooding of all the three rivers and the over flow of water has made the situation even worse.

Provision of health facility by RMF in collaboration with APPNA:

In light of the critical situation in the district, Real Medicine Foundation (RMF) in collaboration with Association of Physicians of Pakistani Descent of North America (APPNA) established a Basic Health Unit (BHU) in Union Council Gulbella, Sardaryab in Charsadda, aiming to provide free health services at the unit for the flood effectees.  The Basic Health Unit (BHU) was established in the very short period of time of 7 days and was formally inaugurated by Dr. Rubina, Country Director RMF on the 20th of December 2010.

Since its inception, the Basic Health Unit (BHU) has been helping the poor people of the area and now treats an average of 50 patients per day.

In this reporting period, 67 women came for antenatal visits, 194 women visited the BHU for Gynecological Problems, and 77 women visited the Basic health unit for Family Planning.
Most of the diseases diagnosed and treated result from the weather and living conditions of the patients: 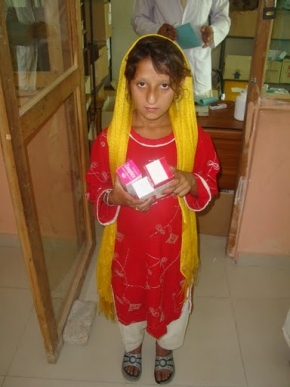 Success Stories: (Successful medical cases treated at RMF-APPNA, BHU-Gulbella)
Saleem Akhthar is a 16 year old child who lives with his family in Union Council, Agra district Charsadda. He studies in the 8th grade in a local government school. His father works in a rubber factory in Rawalpindi and receives 6000 rupees monthly salary. Since he is away from home and cannot visit home daily, he spends half the money on his accommodation in Rawalpindi. He saves the rest 3000 or 4000 rupees for his family for the whole month expenses.
Saleem had recently complained of high grade fever with severe nausea and vomiting for several days and was brought to RMF-APPNA BHU by his mother She said that she gave him some medicine which was given by their neighbors but that had no effect upon him.

On the inquiry of the doctor she told him that the temperature remains constantly high and the boy felt weak. The doctor immediately started cold sponging to bring down his high temperature of 105 F. Similarly, his Blood pressure had dropped to 90/70. His pulse rate was 90 per minutes which indicate relative Bradycardia. After continuous cold sponging for two hours the nursing staff brought down his temperature to 102F.

So his abdominal pain, constant high temperature and relative bradycardia (Slow heart rate) revealed that he was suffering from the Enteric Fever (Typhoid Fever). The doctor gave him Ciproxin 500 mg table and Parasitamol tablets and advised his mother to give him regular medication, light diet and come for follow up after seven days.

After seven days Saleem was brought to the BHU again by his mother. This time his mother seemed really happy and said the medicine been effective within 24 hours and he is recovering fast. She thanked the BHU team and the doctor for their cooperation and said what a great job was done by the RMF/APPNA BHU and that it is the best way of helping the poor of the region. 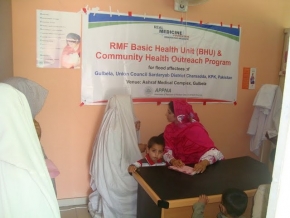 Gul Dad
Gull Dad is 24 years old man and lives with his parents in Union Council Gulbella of Charsadda. His Father is elderly and cannot work anymore and the family is therefore totally dependent upon Gull Dad. Gull Dad works on a sugarcane farm for daily wages and earns only 250 to 300 rupees a day.

One of his relative brought him to the RMF-APPNA BHU and told the medical officer that he had been suffering from fever for the last three days. The patient told the doctor that he could not afford to visit the private clinic due to high costs and that is why he came here. He informed the doctor that he has been using the tablets like Panadol but they had no effect on him. The patient was shivering and trembling with cold as well.

On physical examination it was found that his temperature was 103 F. and he was also suffering from a chill and bad taste of mouth. The doctor also examined his spleen and liver for any enlargement. The mosquito bites, above symptoms, and anemia revealed that Gull Dad was suffering from Malaria.

Doctor then prescribed and gave him Chloroquine and Panadol and asked him to visit the BHU for the follow up after three days. Along with the tablets the doctor also advised him to try to drink plenty of water and bed rest.

Response of his parents:
After three days as advised by the doctor, Gull Dad returned to the BHU for follow up. He was accompanied by his father Noor Khan. Noor Khan was really thankful of the staff of the BHU for helping his son. He said that he is very aged and ill so cannot go out and work and his son is the only hope of their lives. He said that he was really afraid due to his sickness and could not afford to take him to the hospital  but is now very thankful for the treatment of his son as he started improving 12 hours after visiting this BHU. It’s really gratifying to note that now we have a beautiful clinic at our door step with free medicine and check up, Noor Khan added.

While implementing a project deep inside a rural community the organization usually faces different kind of difficulties, but the RMF staff has found the local population extremely helpful. The staff has never been faced with any problems since the beginning of the project. The locals encourage the staff and consider them very beneficial and helpful for the community.
The people of the area consider health problems as one of the most basic issue of the region. The availability of free medicines and the presence of Lady Health Visitor in the RMF-APPNA BHU are especially appreciated by the people.

They want the program to continue for a long period of time and requested the continuity of the RMF-APPNA BHU for a year to treat the basic diseases like, ARIs, Gastroenteritis, Scabies, Dyspepsia, TB, malaria, Typhoid and medical and surgical emergencies. They say a large number of poor people die every year by simple curable diseases just because of the unavailability of a health facility.

They said the unavailability of medical staff, technicians and medicines in government BHU had made them apathetic and the people stopped visiting the government BHUs and RHCs, but the hard work of the RMF-APPNA BHU’s staff, the availability of the standard quality medicines and punctuality of the staff have developed our trust on the RMF-APPNA BHU and impressed the community.

The people also extol the respectful behavior of the staff towards patients. A 30 years old lady during her visit to the BHU and said that she had always found the behavior of the government health staff arrogant but the behavior of this BHU staff is very friendly and different, everyone is polite and well mannered here.