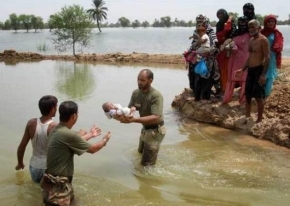 Floods in Khyber Pakhtunkhwa (formerly Northwest Frontier Province) have claimed the lives of over 2,000 people and have affected over 3 million people, leaving hundreds of thousands displaced and homeless. Due to inaccessibility to a large number of flood-hit areas the exact picture of the real disaster still cannot be ascertained.

There are a number of areas in KPK which continue to be submerged in the heavy waters and officials fear that there may be higher mortality and morbidity rates the longer these areas remain cut off.

The worst affected districts, Nowshera and Charsadda, are totally inundated in the unprecedented torrential rains coupled with devastating floods. There are a large number of Tehsils/villages in these districts which remained unreached, where people are still trapped in the floods. No casualty figures of this area are available because of missing communication links.

According to rough estimates tens of thousands of houses were completely destroyed by the recent floods. Some ninety highways, two hundred bridges and thousands of acres of crops were also washed away by flood waters in KPK. The flash floods washed away hundreds of houses, schools, hospitals, link bridges and roads. Hundreds of survivors sought shelter in schools, colleges and public parks in Charsadda and Peshawar after escaping the floods with children on their backs.

Even the provincial capital, Peshawar, remained cut off from the rest of the country for several days, making rescue and relief efforts extremely difficult. As of Sunday, August 1st, the National Highway connecting Islamabad and Peshawar has been opened, but motorways near the Jindi River at the Charsadda interchange have remained flooded. 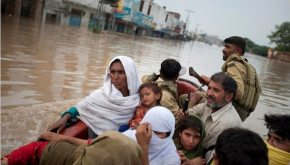 The victims are living in tents or in open air in this scorching heat where temperatures run into the range of 38-44C (111F), without extra clothing, food, clean drinking water or health care. Displaced children are believed to be facing severe acute malnutrition with dozens of children dying due to diseases such as gastroenteritis, typhoid and respiratory infections. Women, especially those pregnant or lactating, are also severely affected. According to the UNFPA, there are more than 50,000 pregnant women affected by these floods. There are also reports about an outbreak of cholera in some areas of Charsadda.

High risk for infectious diseases and epidemics in the flood aftermath include:

The monsoon season is just starting. The wet, humid weather of August creates ideal breeding grounds for a variety of infectious diseases especially in overcrowded un-sanitized settings like tent camps. There is an acute need of medicines and medical personnel, such as doctors and nurses in the camp to respond to any possible outbreak of diseases among women and children.

While the Pakistani Government and NGOs have mounted a large-scale effort to rescue and rehabilitate hundreds of thousands of flood hit inhabitants of Khyber Pakhtunkhwa (KPK), the mission has been slow because of a lack of resources and destroyed communication and transportation networks throughout the region.

Over the past week, since flooding began, Relief Foundation teams have travelled throughout the flood affected areas of Charsadda district, where they have previously been involved in flood relief, both assisting in relief efforts and conducting a needs assessment of the area. Through these visits, the teams have identified the overwhelming need for emergency and basic medical care for these regions as the affected people begin to recover and piece back together their lives. They have identified a number of tent camps for displaced flood victims, where no health care services are currently being provided, as some of the areas most in need of primary and emergency health services. 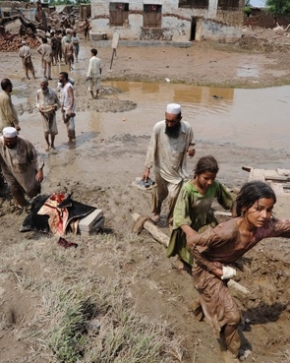 Based on the success of our 2009 Flood Relief Medical Camps and the recent needs assessment visits, Real Medicine Foundation (RMF) and Relief Foundation (RF) propose to conduct 10 free medical camps in the tent camps of Charsadda district to address the emergency and primary health needs of flood affected populations, treating at least 20,000-25,000 people.

Description of the project

RMF-RF aims that whatever be the service type, they should be most accessible to the target population not only in terms of location and accessibility but also in providing a non-stigmatizing and gender-sensitive service that caters to both, general and reproductive health ailments. The importance of including general health services cannot be overemphasized, as it is this component that helps build the non-stigmatizing ambiance around the camp as well as in the clinic.