During the first quarter of 2013 the Mobile Clinic continued visiting the villages of Malei and Mexixine bi-weekly through February, at which point the schedule changed to cover Malei and Furquia. The main activities of the Mobile Clinic include provision of:

2,816 people benefited directly from activities implemented by the Mobile Clinic during this reporting period.

In early February, the Mexixine health facility, the first facility in Namacurra to receive Mobile Clinic support, became autonomous in its provision of HIV & AIDS services. Services transitioned into the district health facility include treatment of opportunistic infections and prevention of mother to child transmission of HIV as well as antiretroviral therapy for all eligible patients. The placement of new qualified medical staff (1 General Medicine Technician and 1 Health Counselor) have aided the implementation of such activities. The strengthened technical capacity of local staff helps improve the follow-up of patients who were once referred to the district headquarters, thereby increasing the number of people with access to quality health services.

The facility in Mexixine will continue to receive regular technical support from our Clinical Mentoring team, transport support twice a week for CD4, complete blood count and biochemistry samples as well as updated information on the clinical database.

The impact of the Mobile Clinic intervention in Furquia was also noted this quarter. For the first time in history the health facility began providing Mother and Child Health services (antenatal and postnatal consultation, family planning, healthy child and child at risk consultations). In just four weeks of activities, approximately 700 women and children benefited from such services.

As part of the official launch of the Mobile Clinic support to the village of Furquia in February, we organized an HIV counseling and testing campaign. Through this 1-day campaign, 106 individuals were counseled and tested of which 30 were HIV positive.

In May 2009, Zeme João Mota Sulima, 39, began to have health problems while living in Maputo where he had emigrated in search of better living conditions. He was experiencing strong, frequent fevers and coughing and soon decided to go to the hospital. Zeme first ventured to the local health center for an HIV test and later to the Central Hospital of Maputo. After receiving a seropositive result at both health facilities, he was initiated onto ART. 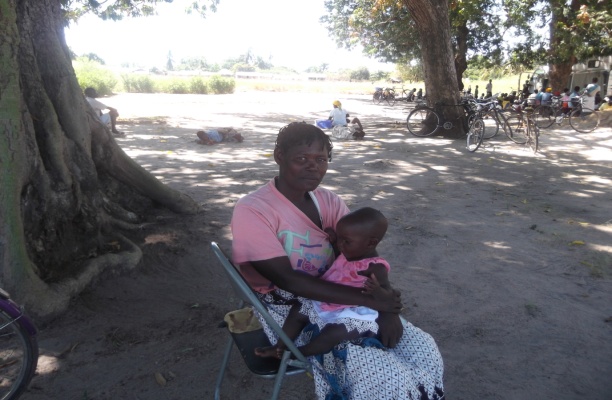 In June 2011, Zeme decided to return to his hometown of Furquia, as he could no longer work in Maputo. After arriving in Furquia, Zeme approached the local health center to make arrangements for continuing on ART, but he was informed that his treatment would have to be managed at the main hospital in Namacurra, about 40 km from Furquia. As a result, Zeme had to discontinue his ART, because he was unable to secure regular transport to the district headquarters where the Namacurra facility is located.

On February 4, 2013, the Mobile Clinic reached Furquia. It was not long before Zeme and other community members learned of its arrival and that its presence meant access to additional health services and medicines. Specifically, the Mobile Clinic’s arrival meant local HIV counseling and testing and the provision of anti-retroviral therapy. After hearing of this, Zeme decided to return to the health center for treatment. He shared, "today I got here very early for a consultation, took the test again and I'll re-start the treatment that was stopped.”

With the introduction of the Mobile Clinic at such remote health facilities, there is potential to retrieve a large number of patients lost previously due to the long distance patients would have to travel in order to access ART. The Mobile Clinic support strengthens the health services in peripheral areas, with the introduction of more services such as maternal child health and prenatal care, counseling and testing for HIV and TB and access to treatment after testing.

The Mobile Clinic project started in Namacurra district in order to provide access to health services not yet introduced in such remote areas. Currently operating in the villages of Malei and Furquia, in addition to ART services, the Mobile Clinic also provides community sensitization/education and mobilization for TB patients, pregnant mothers and the general public to utilize the new clinic services. Overall, in partnership with the DPS, the health facility infrastructure and service provision at these selected sites is strengthened, and community members like Zeme have another chance at living a longer, healthier life.

“Saving the lives of mothers and children”

Luisa Tomas Sinha, age 43, was born and raised in Furquia where she currently resides with her six children. Luisa shared the following with our staff:  “As soon as Igot married, I became pregnant. I have had 11 pregnancies since, of which I lost 5 children when they were only 1-2 months old. After I lost a child, I would soon become pregnant again. I tried some traditional medicine to prevent getting pregnant right away, but nothing changed. I have lived like that, all this time, getting pregnant every year, until last month when I arrived here at the hospital and participated in a talk with the Mobile Clinic nurse. 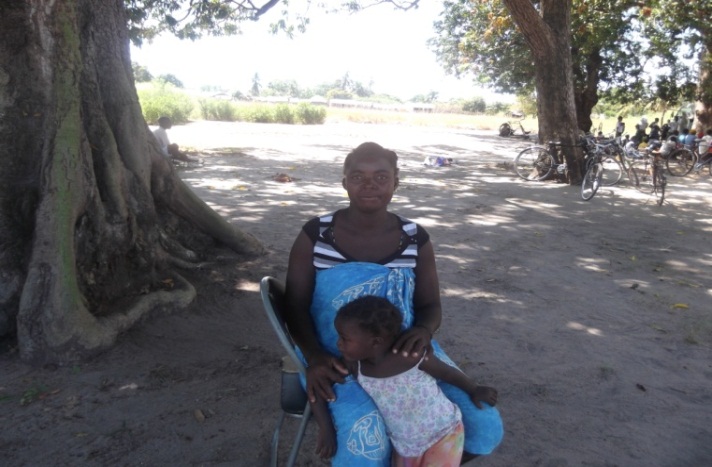 The nurse explained that the clinic had many services for women, and I could use family planning to control the births. I decided to go for a consultation and learned that there are several methods to avoid becoming pregnant. I chose the injection method, because my youngest daughter is only 1 year old, my second youngest is 2 and I do not want to get pregnant again. My body is tired and can no longer take it.”

Bezinha Santana, 39, was born in Namacurra and currently resides in Furquia. Shehas 8 children, the youngest of which is 2 years old. Bezinha shared that she also had a complicated pregnancy last year that unfortunately ended in miscarriage. 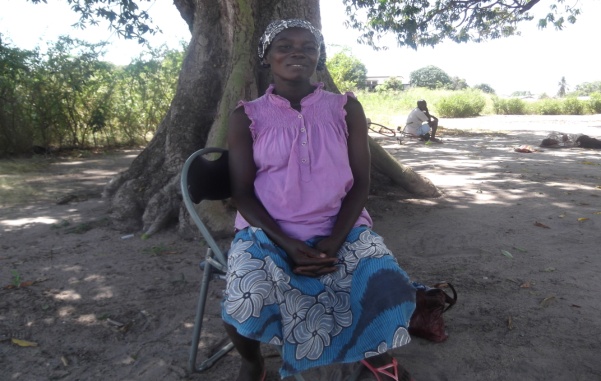 As she relayed to our staff: “The processwent very badly, because I had complications and had to go to the hospital in Namacurra. After the treatment, I was told to start family planning because my body needed some time before getting pregnant again. However, when I got to Furquia, there were no such services at our health post. I started taking traditional medicine to avoid pregnancy, paying the traditional healers to get the local treatment. One day I arrived here at the health post and saw the Mobile Clinic. The nurse informed me that I could receive family planning support without paying anything. Today I am taking birth control pills, which allows me to have a healthy amount of time between pregnancies.”

Antonia Philip is a 41 year old mother of 4 and is currently pregnant with her ​​fifth. All 4 of her children were born at home, and she did not have access to any vaccines during any of the pregnancies. Antonia shared, “Iwould have had 7 children, but I lost the others in the third or fourth month of those pregnancies. Even last year I was pregnant and lost the child before birth, when he was still very small.” Antonia learned of the Maternal Child Health services of the mobile clinic when she came for a consultation in the health post because she was not feeling well. It was then that she participated in a talk with the Maternal Child Health Nurse while waiting to be called in for her visit, and Antonia learned of the necessary consultations for pregnant women to ensure both her health and that of her child. 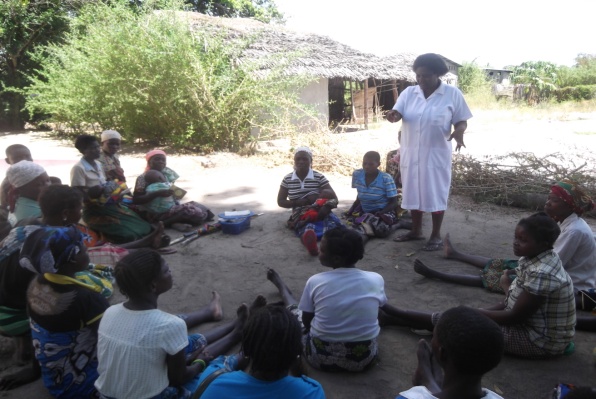 "Today I came for a second consultation, and I have just received a vaccine. Now I feel safer to have the baby, and I have also spoken to my neighbors thatare pregnant and encouraged them to come for a consultation here at the Mobile Clinic.”

The Maternal Child Health (MCH) services at the Mobile Clinic are offered by an MCH nurse who provides assistance in pre-natal consultations, monitoring of pregnancies, tetanus vaccines, deworming and iron supplementation for pregnant mothers, testing for sexually-transmitted infections as needed, identification of at-risk women, promotion of births in the maternity ward and adherence to PMTCT prophylactic treatment in addition to provision of general MCH advice for mothers.

The Mobile Clinic’s MCH nurse reports, “These MCH services have never been provided to the women in this area prior to the arrival of the Mobile Clinic. All problems related to childbirth and pregnancy had to be handled by traditional birth attendants. Now, since the arrival of the Mobile Clinic, I'm already noticing a difference. I feel that our lectures and efforts to sensitize the community have been proven effective. Mothers come voluntarily for consultations to learn about their state of health and to ask about family planning options. In these encounters we are able to connect the mothers with other services as well. For instance, when we treat an HIV-positive mother we are able to enroll the child into the child-at-risk services.

In addition to theprenatal consultation, family planning, immunization of children and PMTCT provided for participants at lectures, we have also received referrals from traditional midwives of pregnant mothers who have flocked there. For instance, with family planning, patients were previously told to look for traditional remedies. Now, with the Mobile Clinic services, these women have more options. Women come here for help to control their fertility and prevent unwanted pregnancy and disease. The presence of the Mobile Clinic makes this possible.”