Activities this quarter have included two areas: a) routine support to Macuse and Mexixine localities in Namacurra District and b) participation in specific events in the province that have a health fair, namely:

– Health Fair – Quelimane City (in the context of the Moçambique Radio Anniversary, in coordination with the Health Province and City Directorate, held on October, 2, 2010)
– Health Fair – Zalala Beach, Nicoadala District (in the context of the Zalala Festival, in coordination with the Health Province and City Directorate, Provincial Tourism Directorate and Provincial Directorate, on November, 6-7, 2010)
– Health Fair – Mocuba District Capital (in the context of the International AIDS Day on December 1, 2010 in coordination with the Province and District Health Directorate, the central ceremony was conducted by the First Lady of Mozambique who visited the Mobile Clinic and received information about the MC activities. The First Lady expressed her interest in this type of intervention and praised the fact that the MC participates in Health Fairs and reaches people of remote areas in Namacurra District. The MC was also visited by the Provincial Health Director and Médica Chefe (Chief Medical Officer).

Photos below of the First Lady of Mozambique visiting our mobile clinic at the Health Fair:

– Health Fair – Quelimane City during the celebration of the National Campaign (Gala Beneficiente) to raise funds for OVC. It was the first time that Zambézia Province was named the official place for the Gala. Beneficiente. It was coordinated with the Health Province and City Directorate; held on October 2, 2010).
– Participation during the second phase of the National Mother and Child Health Campaign during the first week of November
It was agreed with the District Health Director and the Médico Chefe of Namacurra District that the Mobile Clinic will travel each Wednesday with a Mobile Brigade to different communities providing MCH care. 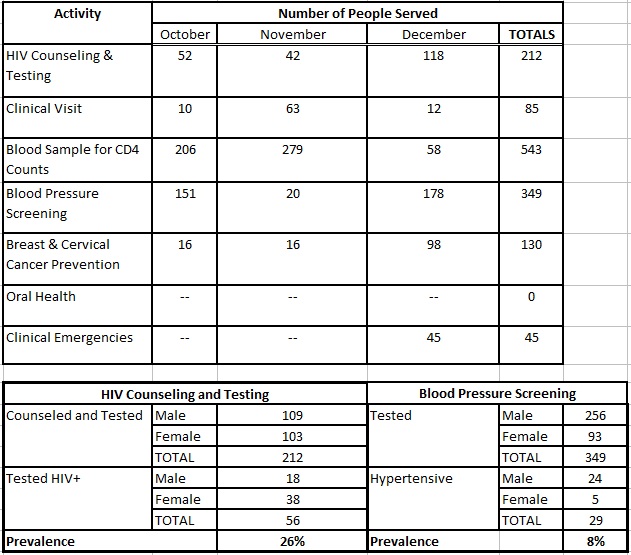 Impact this project has on the community (who is benefiting and how):
The Mobile Clinic continues to successfully reach populations whose access to health services is very limited in rural localities of Namacurra District and support the Provincial Health Fairs in other districts. Even though interventions are not strongly focused on HIV and AIDS (with the inclusion of delivery of treatment to under or un-served communities), RMF/FGH feels that the comprehensive primary health care service strongly continues to support the greatest health challenges of Mozambican communities: HIV/AIDS and Malaria.
The Mobile Clinic strategy will be reviewed during the next quarter in order to increase outcomes and impact.

FGH/RMF will introduce MC indicators into the FGH database in order to improve follow-up and have better inputs in order to analyze results and review the strategy for implementation of the MC activities.

Marta Lourenço, age 50, traveled a long distance from the Massavara community of Namacurra District in search of a Mobile Clinic (MC) consultation in late December 2010. Her first consultation involved a pre-test counseling session, administration of an HIV test by the Mobile Clinic staff and after receiving a positive result, Marta received post-test counseling on how to live a healthy life despite being HIV positive.

Upon her first visit, Marta was classified as Stage IV (according to the WHO clinical classification for HIV progression), showing a very poor health status. At this stage, Marta’s weakness forced her to be bed-ridden, rendering her unable to work and to take care of herself and her family.
The MC health staff began the process for enrolling Marta into care and the team was able to schedule multiple visits with Marta to improve her condition. Marta received treatment for esophageal candidiasis, pulmonary pneumocystosis and initiated Cotrimoxazole prophylaxis for other opportunistic infections. In addition, the Mobile Clinic staff took a blood sample for all the other needed laboratory tests including CD4 count. Though Marta has not yet begun anti-retroviral therapy (ART), she successfully completed the required counseling sessions and the ART Committee recently approved the initiation of treatment.

Marta’s health is already improving; she can walk, perform some housekeeping activities and take care of herself without assistance. With the MC staff continuing to provide clinical follow up, Marta will soon begin the next stage of treatment on the road to recovery.

She has expressed genuine excitement about starting ART, and she is grateful for the support of the Real Medicine Foundation/Medical Mission International sponsored Mobile Clinic.