Real Medicine’s Mobile Clinic is being deployed in the most populous province of Mozambique, Zambézia Province, located in the central coastal region south of Nampula and north of Sofala. The provincial capital of Zambézia is Quelimane on the Bons Sinais River. Zambézia has a total area of 103,127 km², much of it drained by the Zambezi River. The population of Zambézia is 3,794,509 (2006 statistics).

FGH, in close coordination with the DPS and DDSs (Provincial and District Health Directorates) carried out Mobile Clinic activities through the auspices of RMF in three different districts during special public events in the months of November and December, 2009. These special events, the week of the Child Health Campaign in Namacurra District, the Zalala Beach Tourism Festival, just outside of Quelimane and the celebrations related to World AIDS Day (Dec 1) and at the same time the Health Fair, both in Ile District. Over 3,500 people visited the Mobile Clinic during the 3 events. While we cannot know the exact number of indirect beneficiaries, FGH estimates that, if extended to the relatives (5 per person) of the direct beneficiaries, the indirect beneficiaries are approximately 17,500.

Primary health care was provided at the Mobile Clinics, as well as blood pressure screenings with appropriate counseling, HIV Counseling and Testing (HCT) for all with referrals to those who are seropositive, breast and cervical cancer prevention counseling, vaccinations, de-worming, vitamin A distribution and maternal and child health promotion, as well as general healthcare education. In addition, the public presentation of the Mobile Clinic to broad segments of the population was accomplished since, for example, Quelimane, the capital of the Province, has a population of 65,548.

The official public activities where the Mobile Clinic was present gathered community residents, provincial authorities including the Governor, the Provincial Directors for Health (DPS), for Women and Social Action (DPMAS), for Youths and Sports, HIV & AIDS Provincial Nuclei (NPCS) among others, as well as other NGOs.

During the 8 hours of operations at the Health Fair in Quelimane, the Mobile Clinic provided HIV counseling and testing to 495 people with 13 of them testing positive and receiving referrals. Blood pressure screening was done for 463 persons (419 adults, 44 children) and 77 of those screened had high blood pressure and were counseled. 205 women received breast and cervical cancer prevention counseling.

In November, at the Zalala Beach Festival, also in Quelimane City, of 75 persons counseled and tested for HIV, 5 were found to have positive results and referred. Oral contraceptives were distributed to 412 women and 2,000 condoms were distributed. 231 persons received Blood pressure screening; 99 were counseled and educated on cervical and breast cancer prevention. 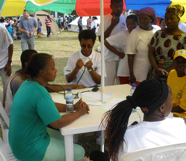 In Ile District on World AIDS Day, December 1st, 15 of the 100 persons counseled and tested at the Mobile Clinic for HIV were found to have the disease and referred. Of the 182 persons receiving blood pressure screening, 19 were found to be hypertensive, 2 were hypotensive. 313 were counseled and educated on cervical and breast cancer prevention.

Mobile Clinic services are also targeted toward the population in the District of Gile (169,285 persons) and to the population of Morrumbala (361,896 persons). Morrumbala, with an area of 12,972, square kilometers is the part of Zambézia Province that had been devastated by floods in 2007 and 2008.

The Mobile Clinic assists in improving the quality of life by providing access to health services in remote areas of Zambézia Province, particularly access to maternal-child healthcare and ARV treatment for people living with HIV/AIDS, tuberculosis and other diseases – the most prevalent health problems in the regions being malaria, malnutrition, HIV/AIDS, tuberculosis, skin diseases and water transmissible diseases. Through education and counseling, participants at the Mobile Clinics are encouraged to assume responsibility for their health care.

An annual plan for implementation of health related activities for the Mobile Clinic is being finalized in coordination with the DPS and DDSs.