The second day of Mobile Clinic operations I was part of took place in Macuse, also in Namacurra District, a 115km drive. Macuse has a population 40,000.

In Quelimane on June 2nd, I accompanied Teresa Mendoza, FGH’s Directora Provincial, to a meeting with the Provincial Health Director, Dr. Battista. Dr. Battista is very excited about the impact and success of our Mobile Clinic operations and stated what I had heard many times in Mozambique: the only thing missing are more mobile clinics and the health services and healthcare outreach they could provide to the people of Mozambique. Another vision for the future are surgery medical clinics, including ophthalmologic surgery.

There are 10 health centers in Namacurra, only 2 have ARVs. In Namacurra, with a total population of 230,000, only 5,200 patients are in the system as HIV+, 400 of them children, and thus get medical treatment.

Mozambique is divided into 128 districts; there are 1,200 small health units with a total of only 200 labs. Calculating that every health unit would have a target population of 10,000, the country would need 2,000 of these small health units, and thus is 800 short. In many provinces, the maternal/infant mortality is immense. Many simple life-saving surgeries are just not accessible to a vast percentage of the population. 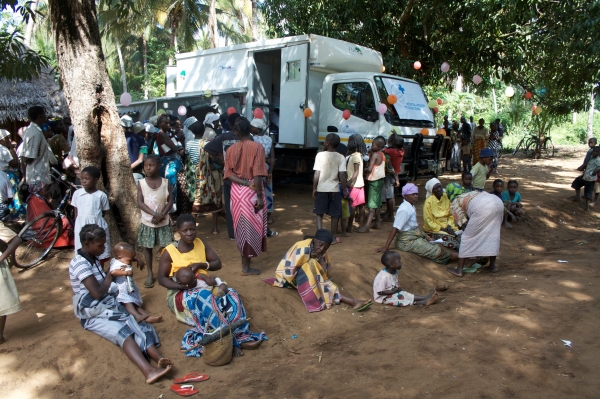 Thank you to Medical Mission International (http://www.mminternational.org.uk/), whose vision made it possible to establish our Mobile Clinic in Mozambique and without whose ongoing generosity and support this work would not be possible.