My two-week sojourn in Gile district allowed me to observe the full-spectrum of rural health programs being run by the Ministry of Health, Friends in Global Health (FGH) and other partners. Having surveyed the clinical activities of FGH in the district during my first few days in Gile, I now needed to learn about the health outreach and education programs in the communities themselves. On June 14, I had the perfect opportunity to spend time out in the villages and observe the realities of life in rural Mozambique.
I set out from the peripheral health center in the locality of Moneia with the goal of visiting some community health councils in the surrounding communities. I was accompanied by Mr. Dambini, the district Ministry of Health supervisor, who oversees the activities of the community health councils. These councils are organized, trained and supported jointly by the Ministry of Health and World Vision, as part of a community outreach program called COACH. So far, out of 200 communities in all of Gile, currently 27 communities have set up well-organized health councils through COACH. Thus, there is definitely much more room to scale up this program which has proved to be quite successful so far.

My meeting with the health council in Nahoa proved to be the most instructive and interesting. Nahoa is a poor community of several hundred people that lies 20 km from the Moneia health center and about 40 km from Gile town. The community health council here is fairly dynamic and active. Soon after I arrived in Nahoa, we met with the council members—eleven in number—in a small open-sided mud hut in a central part of the village. After introductions, Senor Dambini explained the roles and functions of the council. The council is formed by elders and influential members of the community. It comprises activists who provide basic home-based care to AIDS patients, reproductive health counselors, influential ‘mothers’ in the community who provide nutritional counseling for children and IMCI (Integrated Management of Childhood Illness) health workers who go house-to-house to do basic pediatric evaluations. Typically, the activists and health workers are volunteers who are chosen by the council to represent them, although they sometimes receive small incentives such as t-shirts. 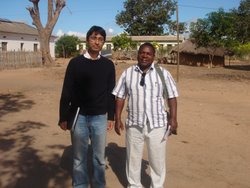 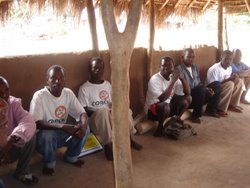 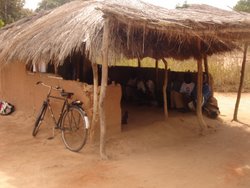 Later in the day, I had the chance to accompany one of the IMCI workers as he made the rounds from house to house. At each house, the health worker looked through the child’s growth chart and made sure the vaccination record was up to date. He would examine the child and deliver nutritional counseling if he or she looked undernourished. We visited several families and in almost every instance children were malnourished. In some cases, the child had symptoms of malaria and the health worker filled out a referral slip for the case to be seen at the health center in Moneia. The IMCI health workers are instructed to refer serious childhood illnesses like persistent diarrhea, unexplained fever and suspected malaria or tuberculosis to the district health centers.

Following the IMCI worker also provided me a walking tour of the village. I observed families living in mud-huts around small patches of farming land. I walked past thatched toilets with no drainage and very poor sanitation. I saw small children playing in the dirt. Older children were working in the fields. Many of them had symptoms of malnutrition; a few even had early signs of kwashiorkor. In fact, the IMCI worker told me that the two biggest problems among children in the community were acute malnutrition and malaria. 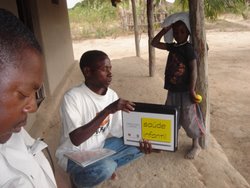 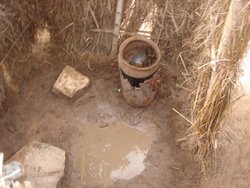 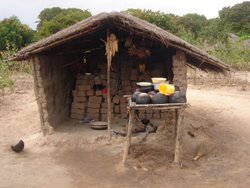 Before I left Nahoa, I was invited to observe a drama put on by the health council relating to malaria. This was the highlight of my day in the communities. The council often organizes participatory health-related theatre pieces for the benefit of the community members. The drama started out with one of the health workers—playing a malaria patient— lying prone on the floor, shivering as if with chills. One of the ‘mothers’ in the council played the role of the frantic mother of the patient. A traditional healer was summoned and quickly pronounced that the patient was possessed by demons that needed to be exorcised. Following an unsuccessful exorcism, featuring a rattle and medicinal water, an IMCI agent arrived and counseled the mother to take the patient to the health center. After a lot of convincing, the patient was finally picked up and carried to the hospital where he received anti-malarial medication.

Eventually, after home care involving the regular administration of medicines and blankets and a theatrically contrived convalescence, the patient recovered fully. A joyous mood overtook the audience as they clapped and celebrated the banishing of malaria.

Afterwards, Mr. Dambini giving a debriefing session on the performance. He emphasized that mosquitoes—and not evil spirits—were the causative agent of malaria and highlighted the importance of expediting suspected cases to the health center without delay. On a different note, Dambini also lectured on the negative consequences of not receiving childhood vaccinations. The whole production was then wrapped up with the activistas leading a chant about the benefits of vaccinations for children. Here and there, mothers from the community would be prompted to join in, initiating a form of collective participatory learning. 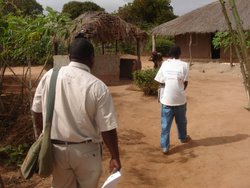 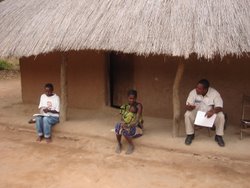 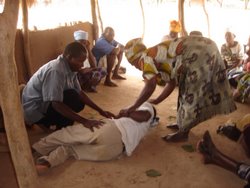 As I observed the theatre and participatory learning activities, I realized that the community health council was enacting a real grass-roots mobilization for health education. What I saw in Nahoa was a well run community program—one which provided health education, entertainment and self-actualization for the community. No program to combat something as complex as AIDS can survive on testing and treatment alone. I realized then that the community health council would be a great forum for the mobile clinic to integrate outreach and education activities into its program.

This week, after many discussions with FGH staff, Mr. Dambini and Dr. Kizito, the District Director of Health, I have formulated a plan to do this. Although the plan is in its conceptual stages, the idea is not only to generate publicity and referrals to the mobile clinic through the community health council but also to film their activities, demonstrations (eg nutritional demonstration to prepare enriched foods) and dramas and project them on a screen attached to the mobile clinic. There is a local traveling cinema group in Mozambique called CinemArena that is showing educational movies for HIV and we can adapt their model to our mobile clinic project. In this way, we can amplify the impact of the health council while incorporating health education into the mobile clinic activities, making it an integrated treatment, testing and education platform for the community. Mr Dambini has already agreed to be our liaison to the health councils for this purpose. The next steps will be to learn more about CinemArena and consult with them to help us implement this combined mobile clinic/cinema idea. 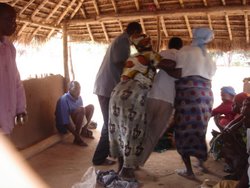 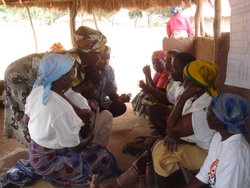 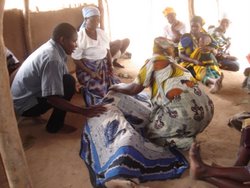