Food and Healthcare outreach in Turkana 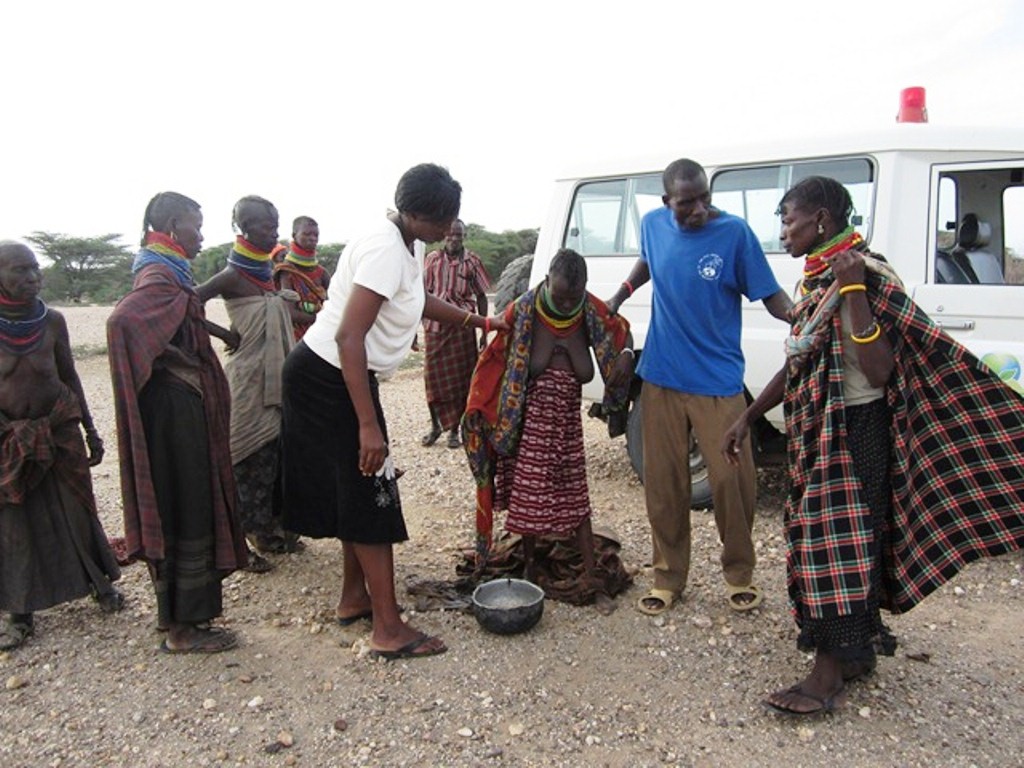 In the month of January, we had an obstetrics emergency, a case of delayed delivery of a woman from Kaikir Village. The patient had labored for over eighteen hours without help. Her relatives had no way to help other than to consult a witchdoctor who smeared white clay soil on the patient’s tummy.  He also requested the relatives to slaughter a white goat and give the patient soup.

However, a neighbor who had the phone number of one of our health team members called and explained the patient’s situation.  We immediately rushed to the village and were there within half an hour. There we found the patient very dehydrated and in a bad state. We examined the patient and found she needed urgent help and a possible caesarian section in a hospital setting. The fetal heart beat was present but slow.

After transport using our mobile clinic vehicle to the Lodwar Hospital, the patient was treated as an emergency case. Two doctors attended the patient, one an OB/Gyn and the other a general physician.  Within an hour a living male infant was delivered spontaneously!

The mother was also treated to improve her health after her long labor that caused dehydration. The mother and the baby were discharged the second day in good condition, and we took them back home with a big smile. At home there was joy among her relatives and neighbors for her coming back with the baby. The elders in Kaikir Village thanked us for saving the life of that mother for they had no vehicle with which to take the patient to the hospital and no knowledge of how to help her. 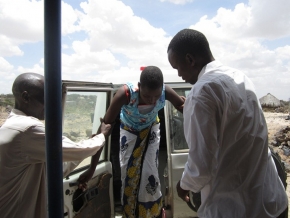 In March, we evaluated a patient from Canaan Village. Her name is Miss Jane Koole, a student from a local high school.  Miss Koole had a severe furuncle (a collection of soft tissue abscesses) on the gluteal muscle extending to the labia majora. The patient had a deep wound that consumed most soft tissues. After we evaluated her in our clinic, we referred her to Lodwar Hospital for further management. At the hospital, the doctors immediately took her to the operating theatre for surgical exploration. The patient was hospitalized for one week and then discharged home in improved condition. RMF funding paid the hospitalization fee for the patient after discharge. The father of that patient appreciated the good that the program has done to help his daughter. At the time he had no funds to take his daughter to the hospital.

Canaan Village is a village for internally displaced persons following the post-election violence in Kenya in 2007.  Miss Koole and her family fled there due to violence against them in the countryside, leaving land and valuables behind. 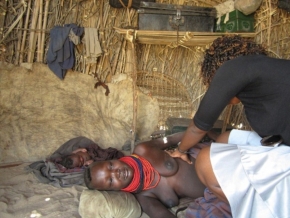 3.   Our team evaluated and referred this young woman with anemia.  Her anemia was caused by a difficult delivery with tearing of the soft tissues and excessive bleeding.  She delivered a living male infant, but there was no assistance available during the delivery, a common problem in Turkanaland.  She bled a lot during and after the delivery.  We managed to take her to Lodwar Hospital where doctors attended her and transfused one pint of blood. Labial (skin) tears were sutured and the baby received polio vaccine. After the treatment we took her back home. At home, her husband, relatives and neighbours were happy and thankful for the quick response to their call for help when they were about to lose their loved one.

4.  In February, we had a high incidence of cases of respiratory tract infections (RTI) in most parts of Turkanaland.  This followed mist and wind that was there for five days.  There were so many patients to see that we decided to divide our team into two; one team remained in our clinic in Lodwar and the other team traveled to the distant villages.  It was not an easy task to see all the patients considering the fact that our team had split into two.

During February, we received reports from church pastors in Nakoriongora Village, 35 miles northwest of Lodwar Town, that the village was badly affected by RTIs and needed urgent help. This village is very far from everything, including health facilities, schools and shopping centers.  There is no clean water (piped water) either, and the residents trek to Lodwar Town for all their needs. A few villagers have bicycles that they use for transport either for buying food in Lodwar or for transporting the sick to Lodwar for treatment. After one day, we went to the village and found the truth of what was reported. Almost everybody had a respiratory tract infection ranging from dry cough to productive cough and runny nose.   A few patients had pneumonia, too, which we treated. 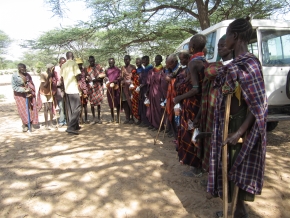 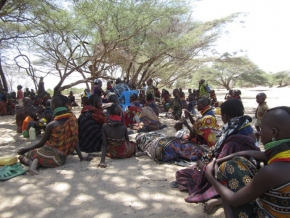 Patients waiting to be seen during mobile clinic in Nakoriongora Village

The health team worked long hours to see all the patients who presented. It took almost seven hours to see all the sick patients that came for treatment on one day.  After one week, one of the pastors from the village met one of the health team staff and told him that everybody was much better and that people were well enough to attend church, even.

5.  Patients in Nakoriongora Village received food bought by the program. Some patients came for treatment when the real issue was that they were hungry. The program purchased food to give such patients in order for them to withstand the effect of medicine on an empty stomach.

6. RMF funding allows the program to refer select patients to tertiary centers for further management. The funding has enabled us to pick the seriously sick patients from rural villages and assist them with transportation and costs to seek treatment. We also pay hospital fees for some patients that are unable to pay.

In the month of March, we referred three cases from different villages to tertiary care centers. The program staff drove them to the hospital for further management. The patients expressed appreciation for the help that the program extended to them.

7.  Since RMF/MMI has funded the Lodwar Health Program, a lot has been achieved in alleviating human suffering. Many rural villages that are far from health facilities have been reached following this funding. There are enough medicines to enable us to reach those in need of these services. RMF/MMI funding enabled the program to buy medicines on a monthly basis. The medicine shelves are always full to cater both to the clinic and outreach clinics.

Below is Mr. Jackson Kapelo, the community health worker who volunteers in our Lodwar Clinic.  Displayed behind him are the medicine shelves full of medicine after receiving a shipment from a pharmaceutical company in Nairobi, Kenya. Availability of medicines has enabled the program to have at least nine and at most twelve outreaches in a month in the rural villages. Also, our Lodwar Clinic is open Monday through Wednesday to serve the community living around the clinic and also people coming from rural villages. 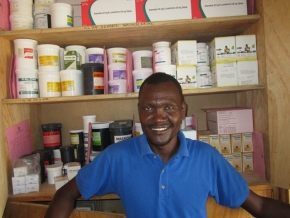 Jackson Kapelo, the community health worker, displays medicine shelves. He is a volunteer in the program.