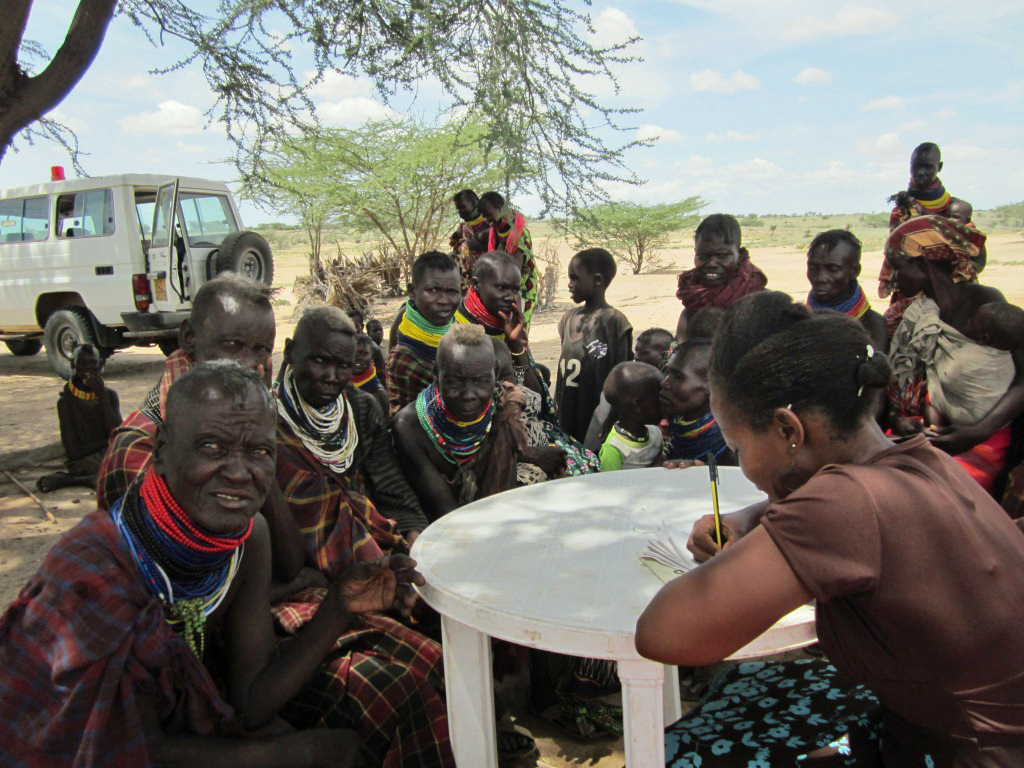 Photo: Patients waiting to be seen in Nayuu Village 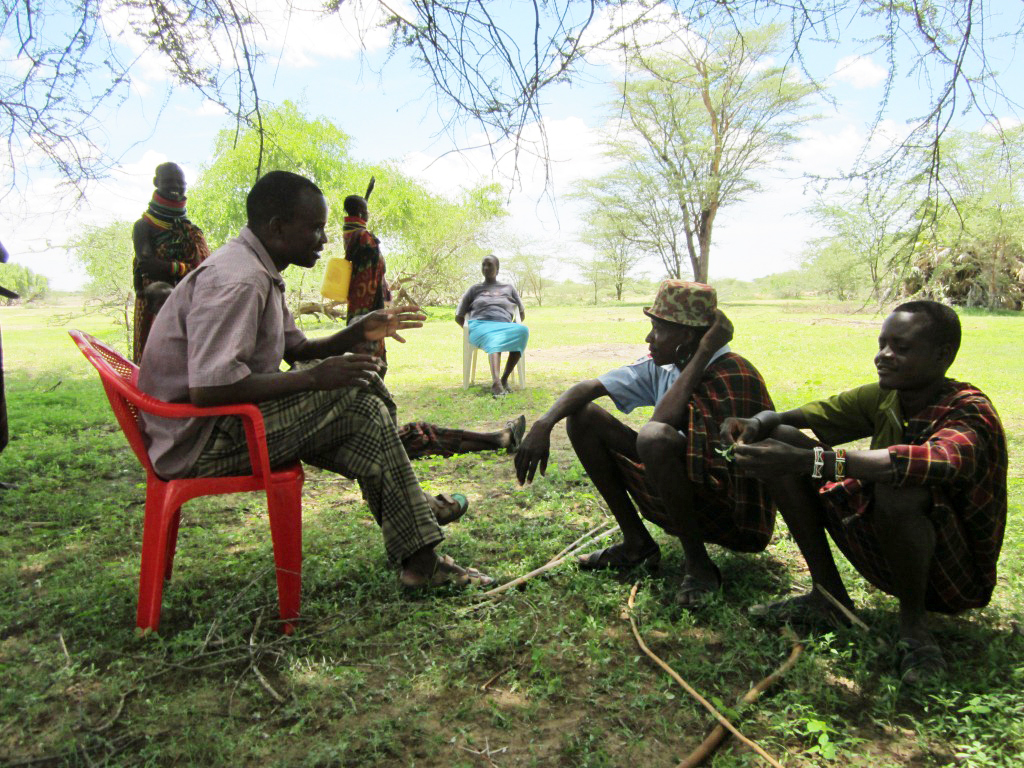 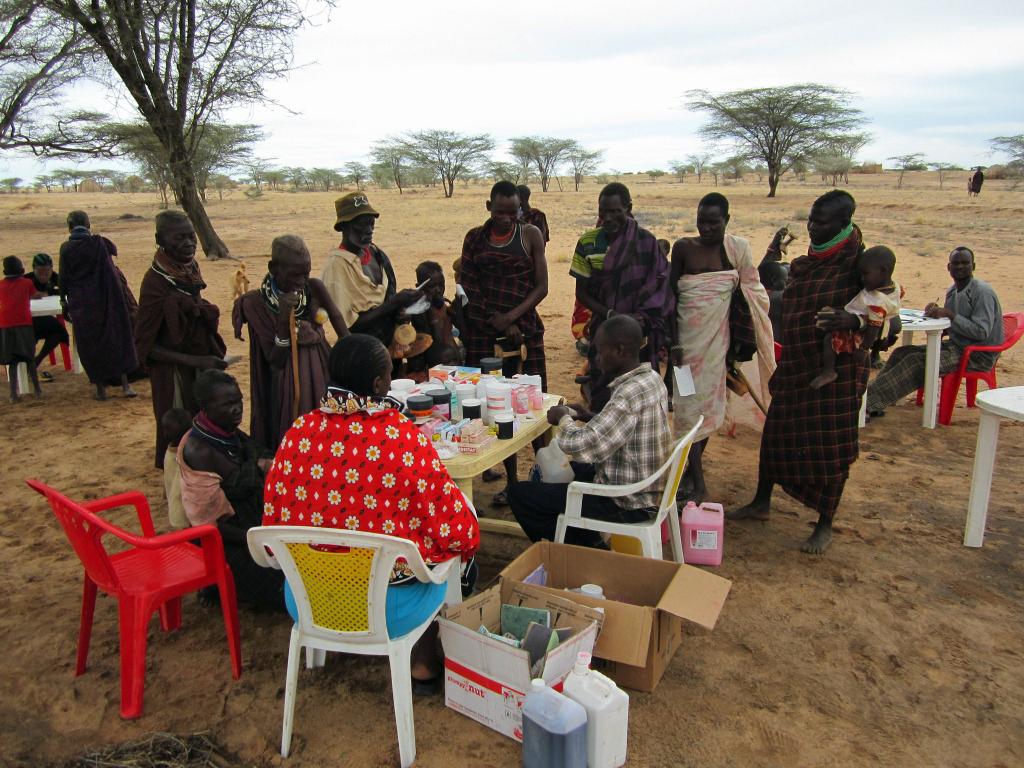 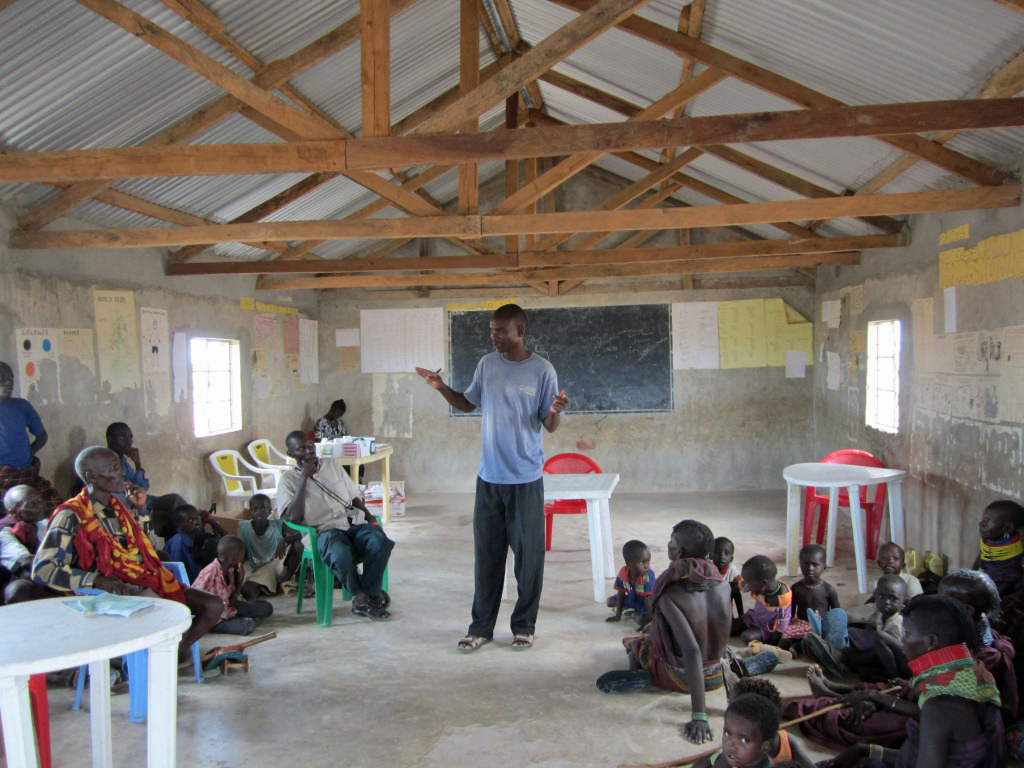 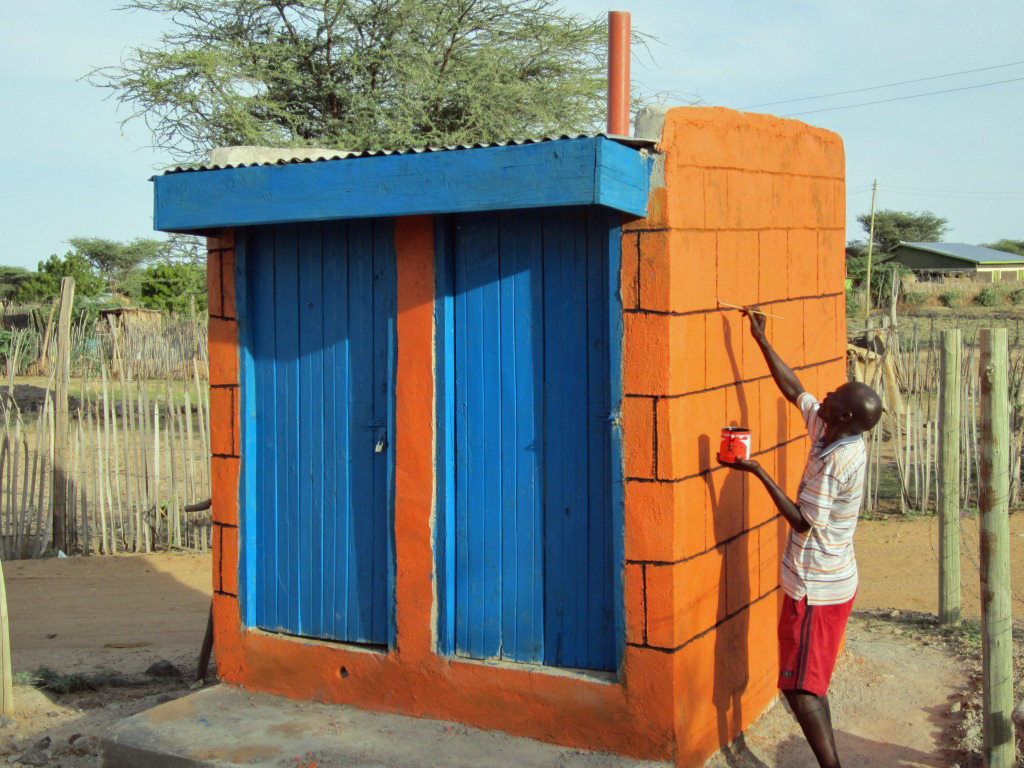 -A total of 3,561 patients were treated and 4,952 cases treated during this second quarter. 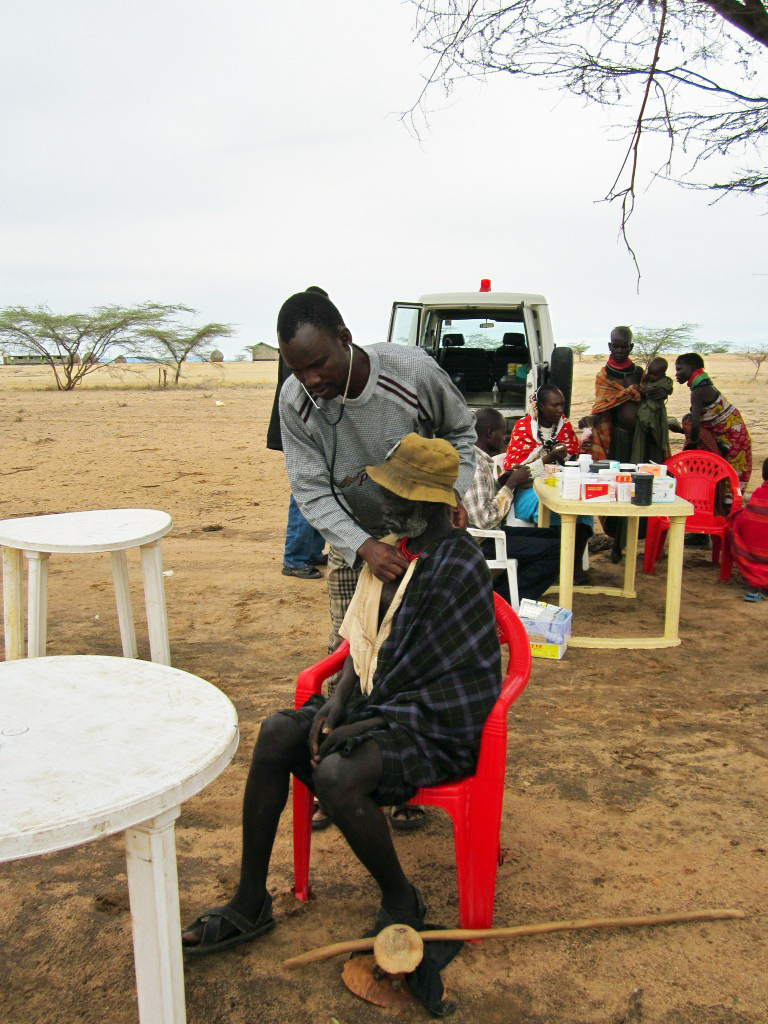 1. Mr. Loleny Musa, about 62 years of age and from Kaikir Village, developed malaria while looking after his goats with his son.  They were out in the desert of Turkanaland in the sun and heat.  He had a high fever that led to convulsions.  His son, who is 10 years old didn’t know what to do for his father, so he ran home the 12 kilometers (over 7 miles) from the grazing fields to get help.

After reaching home he met the rest of their relatives and told them what had happened to his dad.  By good luck, their neighbor had my (Derrick’s) cellular phone number who then called me and explained to me the state of the patient.  In less than half an hour we were in the village and were led out into the desert where the patient was. After starting treatment right there, we took the patient to Lodwar Hospital for further treatment.  After just two days of treatment, he was in a much better state and discharged home on the third day.

2. Miriam Akai, 4 years old, had sustained a fracture of her arm while playing with her brothers and sisters. Her mother who was at home at that time was shocked to see that Miriam’s arm seemed to be broken.  She had no help since her husband was out in the desert tending to their goats.  She had no other family to assist and the girl was too heavy to carry up to Lodwar Town for treatment. 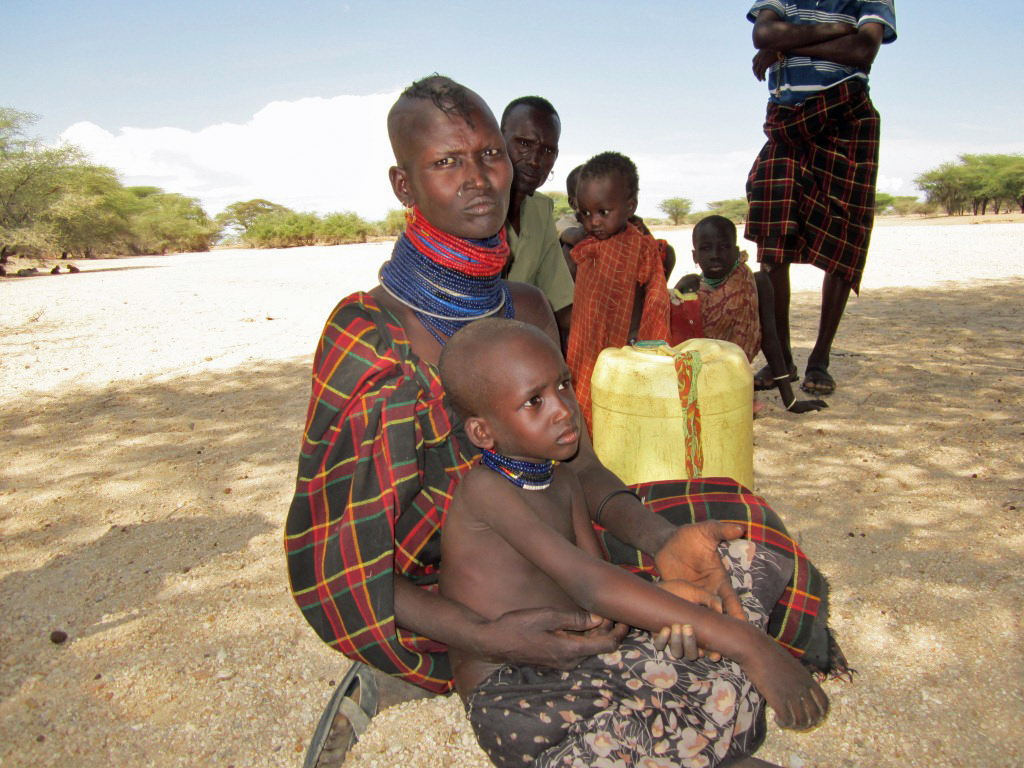 After one day had passed, she learned from her neighbor that our mobile clinic was coming to a village 20 km from her village, so she trekked up to that village and explained to the health team the condition of her young child. It was then that I (Derrick) drove her to pick up little Miriam.  We brought her to the Lodwar Hospital for further treatment. The girl had an x-ray that confirmed the fracture and then a plaster cast was administered. She is now doing well according to their neighbor who came to the Lodwar Clinic for treatment.

3. In the month of June, we managed to save the life of an expectant mother who had delayed labor. The patient was from the far end of Kaikir Village where health services are not available. After she had already been in labor for two days, I (Derrick) was called by a villager from Kaikir Village who had my telephone number. He explained to me the situation which really needed immediate help.

After driving for about one hour, we reached the village, examined the patient and found that she needed to be immediately taken to the hospital for further management. At Lodwar Hospital, she received the full attention of doctors who managed her until she delivered her male baby.  She was very ill, and the baby was born with a low APGAR. This implied poor health; however, after being in the hospital for four days she was discharged home with her baby in good state. The lady thanked the program for having helped her in her time of need.

4. Lenyi, a mother of three from Kerio Village, developed an allergic reaction all over her body and began vomiting blood from an unknown cause. She also developed difficulty in breathing. Her husband was astonished at the sudden illness. Her husband went to his pastor there in Kerio Village and asked him to come and pray for his wife whom he thought could die. Fortunately the pastor called me (Derrick Lowoto) and explained the situation of the patient. I then collected the necessary medicine for the patient and travelled to see her.

By the time I reached Lenyi’s home, she was in a bad state. I gave her medicine and then took her to Lodwar for further treatment. After two days she was much better and went back home in much better shape.

5. The mobile clinic we held at Kakud-ikal Village was of great help to the villagers. When we arrived, we found almost all the adults and 100% of the children had malaria. We fortunately had enough antimalarial medication, thanks to the support of RMF, and so the treatment started immediately on our arrival. All the sick received medicine depending on their condition.  Moreover, we returned in a week to provide follow up for the patients, and after a week all of the villagers were in good health.