• Provide Medicines and Medical supplies to meet the needs of the targeted population
• Increase Mobile/Outreach Clinics in the remote villages
• Provide Medical Services at the Health Facility in Lodwar town:
• Supporting the physical/medical needs of the targeted population
• Home visiting
• Referrals of patients to tertiary care hospital, and HIV and TB government clinics
• Teaching about and providing nutritious food

• The staff is currently maintaining the medicine inventory using a computerized inventory system
• There were 42 clinic days in the Lodwar Clinic, with a total of 1,106 patients treated.
• 24 mobile clinics were conducted in the third quarter with a total of 4,116 patients treated.
• 13 home visits were made.
• 18 referrals were done.
• Public health education continued at the beginning of every clinic session, at the Lodwar clinic and during the mobile clinics.
• Medicine was purchased twice from MEDS, in Nairobi, Kenya.
• Metallic doors were bought to replace the wood doors to prevent termite destruction.
• Wiring (electrical installation) was done during this quarter.
• Maintenance of the mobile clinic vehicle.
• Doug Kendrick, Director of Programs, Medical Mission International, and Dr. Martina Fuchs, CEO, Real Medicine Foundation visited the Lodwar Clinic in September 2011.
• We were extremely grateful for the grant from Medical Mission International in September 2011 that made it possible to provide food, water and medical care to about 5,000 persons during an outreach on September 23rd.

• 42 clinic days were held in the clinic in Lodwar town, with a total of 1,106 patients treated
• 24 mobile clinic days with a total of 4,116 patients treated.
• 13 home visits (hospice visits) were done in this quarter.
• 18 referrals were made to hospitals or tertiary care centers during the quarter.
• Public health teaching done at the beginning of every clinic day for the patients who arrive early and individual teaching on specific cases in the course of treatment.
• Purchased medicines and medical supplies from MEDS, a company supplying medications in Nairobi, Kenya.
• Metallic doors bought for the clinic.
• Electrical installation done in the clinic.
• Maintenance of the clinic vehicle.
• The target population of this project remains at 55,300.

A total of 5,222 patients were treated and 6,895 cases treated during this third quarter.

1. Mr. Jeremiah Lepo, a 69-year-old patient from Elelea Village, developed severe malaria accompanied by diarrhea. It did not take long before he developed a high fever with convulsions. At this point, one of the elders in the village called me (Derrick) to come and rescue the patient. Within a short period of time we drove to the village and found the patient very weak and febrile. We gave him initial treatment before transporting him to Lodwar Hospital for further treatment.   At the hospital, Mr. Lepo was started on anti-malarial medication as well as on rehydration.  After one day in the hospital, he had stabilized and was discharged home the third day, having recovered well. 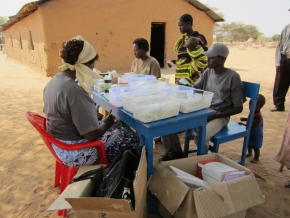 2. Turkana County was recently hit by severe drought and famine. This July we have been reaching out to the rural villages to distribute food for the malnourished children, breast feeding and pregnant mothers with occasional help to the rest of the group. Reaching the patients with food and medicine in the rural villages has been very effective.  The number suffering from malnutrition is flaring each day and so the health program is doing all it can to curb the situation with help from WFP (World Food Program).

We were extremely grateful for the grant from Medical Mission International in September 2011 that made it possible for us to provide food, water and medical care to about 5,000 persons during an outreach on September 23rd.

3. In the past years, our clinic in Lodwar has been facing attacks from termites. Due to termites’ destruction, we have been replacing the timber doors every year. But in the month of August 2011 we happily implemented metallic doors in our clinic. The war is over now.

4. Due to the worsening malnutrition in the region, the health team visited the gardens that the Nayuu Village inhabitants are trying to grow along the Turkwel River. The team taught public health lessons and taught the villagers right there at their farms plant after plant on nutrition content. The team encouraged villagers to consume the produce instead of selling it. They were also encouraged to eat green vegetables produced in their gardens as most of them don’t eat the vegetables but instead sell them.  There is a market for these foods in Lodwar, about 13 miles from their village.

However, two weeks later when the team went for an outreach in the same village, we encountered very encouraging news from the villagers: most of their children and adults had suffered from night blindness for a long time, but because the health team taught them the nutrition content of each plant and the need to eat greens, night blindness was overcome for all of them.

5. Following the drought and famine in Turkanaland, RMF/MMI bought food for villages that were highly affected. The villagers received enough for more than a week. On the day of distribution of food, I encountered one old grandmother who was talking to herself after receiving her ration.   I asked her what she was talking about. She then told me (Derrick) that she was giving thanks to God since that particular day she had nothing to eat.