Jonathan White with reporting from Derrick Lowoto and Rebekah Bartsch

Our initiative for medical and drought relief in Turkana continues successfully with our partnership with the new Share International Health Program (SIHP) and an additional grant from Medical Mission International for food and water.

Our many achievements this past quarter are:

• Conducted 8 mobile clinics per month within four villages – Nabuin, Chokchok, Nayanae & Nakabaran Villages
• We received an additional grant from Medical Mission International for food and water outreach as well as additional medical camps in April 2010.
• During the visit of Mr. Doug Kendrick from Medical Mission International and his colleague from South Africa, Ms. Angela Hess, and Dr. Martina Fuchs from Real Medicine Foundation in May, we were able to provide food and water as well as hold a medical camp in Nakabaran Village serving more than 1,000 persons from the villages of Nakabaran, Kaikir, Napetao, Nakweei, Loturerei, Kangkukus and Locheredome.
• Made home visits to the terminally ill and other vulnerable groups
• Increased support for nutrition programs to improve lifestyles
• A large shipment of medicines from MEDS in Nairobi, Kenya, was ordered and arrived in June 2010, with enough ordered to provide very adequate medication for all the clinic patients through the next reporting month (July 2010). Ordering a larger quantity at one time, perhaps every other month, minimizes associated costs.
• Twelve clinic days were held in the town of Lodwar, with a total of 386 patients treated.
• Public health education was done at each clinic.
• Additionally, plans were solidified for hooking up electricity to the Lodwar clinic to run a refrigerator to be used for vaccine storage.

• The new pharmacy technician is practicing converting the inventory tally from paper to computerized records.
• The outlying villages were served by the mobile clinic on Thursdays and Fridays each week, treating 1,129 patients.
• Six home visits (hospice) were conducted. For example, on 6/7/2010 we visited two HIV/AIDS patients and one elderly lady of an estimated age of 90 years old.
• Fifty portions of nutritional supplements and three boxes of milk of nutrition given out during home visits.
• Eight referrals were made. For example, on July 10, a patient with a spider bite from Nayuu Village was referred to our facility in Lodwar for treatment and observation for one day. This patient was then discharged in stable state.
• Topics of malaria prevention, tuberculosis identification, HIV testing availability were rotated, with one topic taught at the beginning of each clinic.
• Emily Sarara (clinical officer) and Christopher Lokoli (pharmacy technician) were hired as full-time employees. Derrick Lowoto (registered nurse) and Ann Karimojong (nurse aide) continued in their roles.

1. Lokorio is a 45 year male patient from Kerio, 68 km east of Lodwar. He has been sick for the last two years. In the course of his sickness, he visited several witch doctors for treatment but with no success. After losing several animals to witchdoctors he decided to come to the hospital for treatment. He first went to Lodwar District Hospital for treatment but after completion of the treatment he was still sick. Later, he was brought to the RMF/MMI/SI clinic in Lodwar for treatment by a relative. After a week, Lokorio visited the clinic with improvement from his chronic itchy skin disease. We decided to give him more drugs for a month while insisting the importance of coming to a follow up clinic visit after a month. A month later he visited the clinic with no skin disease.

2. Agnes Lokaala is 68 years old and from Nakabaran Village. She has had chronic pelvic inflammatory disease for seven years that caused her difficulty in walking. Past medical history indicated her having visited several hospitals for the same problem but all in vain. One morning the Nakabaran church pastor called us having a sick patient who needed referral. We brought the patient to the RMF/MMI/SI facility and we started on Norfloxacin for six weeks. After the treatment she was well and able to walk. By the time she left to go back home, she thanked RMF/MMI/SI for the services offered to the locals.

3. Edapal Lokai, aged 82 years, from Chokchok Village has been suffering from a chronic urinary infection for the past 3 years in a far village about 150 km north of Lodwar. He moved to Chokchok Village to be nearer to health facilities for treatment. He has been going to the Lodwar District Hospital for treatment but remains sick. During the special clinic in June, we treated him in his own village, but he remained symptomatic. Last month, we held a mobile clinic in Chokchok Village and found he was still sick. We prescribed him Augmentin tablets for seven days. Two weeks later, I visited him and found him in a fair state. During the visit, I gave him Norfloxacin for a two week course. After two weeks, I called the pastor of the village to confirm the state of the patient. (The pastors are usually the only persons in the village with a cellular phone.) The pastor said he was doing well. After one more week, I visited him and found him in much better condition. He was a changed man in terms of health. I have followed up by contacting the pastor several times for an update since then, and he said the elderly man is in good health. To the pastor and me, the old man confessed he had lost hope in life, but now he hopes to live long.

4. Martha Akai, 22 years, from Kaitese Village had a miscarriage in her third month of pregnancy. She bled for 6 hours before my arrival. I infused her with normal saline before transferring her a long distance in our mobile clinic vehicle to the District Hospital, where inpatient obstetric care is available. Two hours later, she underwent surgery, with all products of conception removed and received a blood transfusion at the same time. Three days later she was discharged in a fair state, and we took her back to her village. Martha lacked words to give her gratitude with tears running from her eyes. She said she was dead, but because of our help she is alive again and back in the village to start life. 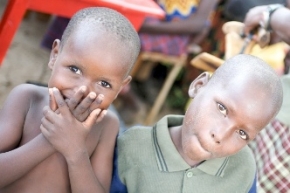