"A devastating drought is sweeping across Kenya, killing livestock, crops and children. It is stirring up tensions in the ramshackle slums where the water taps have run dry… In Baringo, in the Rift Valley, people are eating cactus because corn and wheat have gotten so expensive. In Nyeri, in central Kenya, some have turned to pig feed. …Turkana children, dressed in little more than a sheet, are hiking 20 miles for a gallon of water. Turkana men are abandoning families, simply vanishing into the desert because they cannot face the shame of being unable to feed their children. Many people here now have nothing to eat but the chalky, bitter fruits that grow wild in the desert. They smash them open with rocks to get at the barely edible part inside."
– Jeffrey Gettleman, NY Times, September 2009 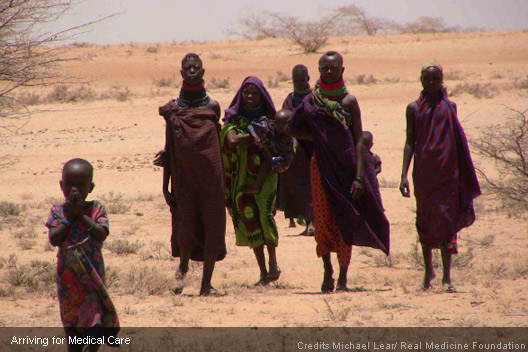 Following up on this NY Times article, Real Medicine connected with its author, Jeffrey Gettleman, in Kenya. We decided to support the efforts to get water and immediate relief to the people in the afflicted areas as quickly as possible. RMF’s Director, International Relations, Michael Lear will go to Kenya this weekend to help set up the infrastructure for our work. The areas afflicted the worst can only be reached by plane.

In addition to coordinating with the NY Times office in Nairobi, we are coordinating with World Vision to deliver food to the children under five age group and we are looking into the region’s water/ irrigation projects as well, for longer term water and food security. 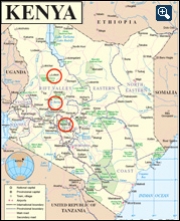 World Vision Kenya, September 2009: "Turkana is the largest district in Kenya. The district covers 77,000km, which constitutes 42% of the Rift Valley Province. The district borders Ethiopia to the Northeast, Sudan to the Northwest, Uganda to the West, Baringo and West Pokot to the South, Samburu to the Southeast, and Marsabit to the East. The population of the district is estimated at 454,100. Turkana is one of the districts that are at risk of sliding from acute food and livelihood crisis and into a humanitarian emergency if immediate measures are not taken to avert the gradual slide. Prolonged drought, conflict, and disease have over the years eroded the coping capacity of the community in Turkana; over 62% of the district's population is currently under the general food distribution program, this number is set to increase as most food security indictors have not been performing well."

"The recently concluded long rains assessment (LRA) estimate that close to ten million people in the country (Kenya) are food insecure." A breakdown of those affected is presented below: