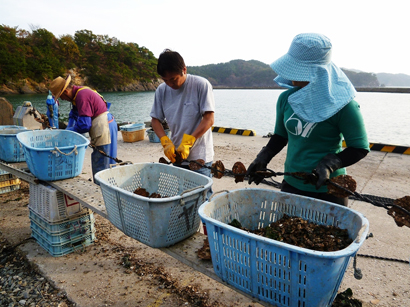 Metabolic Studio/The Annenberg Foundation Grant
Through the Metabolic Studio, a direct charitable activity of The Annenberg Foundation, Real Medicine Foundation (RMF) received a $100,000 grant on September 12th, 2011, directed towards Tsunami/Earthquake Relief Efforts in Japan in partnership with the Japanese Emergency NGO (JEN).  Over the course of 3 months, from October 1st to December 31st, 2011, RMF and JEN were able to use these funds for a Fishery Rebuilding and Assistance effort on the Oshika Peninsula.

Project Objectives
Recover the livelihood of Earthquake/Tsunami affected fishermen of Eastern Japan on the Oshika Peninsula.  The immediate objective is for the local fishermen of the Yoriiso-hama, Higashihama, and Omotehama communities to be able to restart aqua-farming of ascidiacea and scallops effectively with the purchase of the necessary equipment for port operation and through reconnecting the fishing community. This will also serve as a pilot and as a model for the recovery of other affected fishery dependent communities.

Project Rationale
Severe Population Decrease from Villages due to the Destruction of the Fishing Harbor as the Main Industry
One of the major factors in this population decrease was that many fishermen decided to give up on continuing the fishery since the port facilities were fully destroyed by the Tsunami. The main industry in these villages had been fishery with 90% of the local population depending on it. Assistance for people in this industry will also prevent more people from abandoning this community and will provide incentives for further rebuilding.

Late Income Arrival of Aqua Farming
Community members are currently cleaning debris by hand to restart the aqua-farming. However, the nature of aqua- farming does not allow the locals to earn money right after the planting. Incomes from scallop generally take one year, and ascidiacea will take up to three years. Assistance in boat fishing can help with quick-income generation. JEN will therefore assist with providing the necessary equipment to fishermen for the recovery of the fishery industry.

Late Assistance Progress by Government
Although a funding scheme by central and local governments on aqua-farming is in the process, actual disbursement may take some time. Also, the reconstruction of port facilities is only in the planning stage, and only surface reconstruction has been completed.

Along with much of the east coast of Japan, the Oshika Peninsula in Japan was severely damaged by the tsunami of March 11th, 2011; resulting in many casualties and the loss of almost all of the social and economic infrastructure.  On the Oshika Peninsula alone, of a population of 4,882 there were 112 persons who either passed away or are missing as a result of the tsunami.  The area and all of the communities along both sides of the Peninsula suffered a tremendous amount of damage.

The main industry in this area is fishing and aqua-culture, which directly supports more than 60% of its residents. Most of the fishing equipment and supplies available on the Oshika Peninsula area were washed away in the tsunami.  All of the seaports and working platforms for aqua-farming in the Oshika Peninsula were damaged with more than 90% of the fishing boats and more than 80% of equipment for on-land work lost or irreparably damaged.

The Miyagi Prefecture, where the Oshika Peninsula is located, has 82% of the national production of sea squirts (Ministry of Agriculture, Forestry and Fisheries of Japan, 2011). In the Samenoura Harbor on the Oshika Peninsula, the larva of natural sea squirts was harvested sustainably before the tsunami. Besides sea squirt harvesting, the main fishing activities of the Oshika Peninsula were the aqua-farming of scallops and boat-fishing of squid and young lance fish. 100% of the fishery-related facilities servicing these different fishing activities, including markets, land operation hubs, and fishery associations were damaged by the tsunami.

Yoriiso-hama Village/Port location
Immediately after the tsunami, the Peninsula was isolated as the roads connecting to the Ishinomaki City center were completely cut off. The villagers on the Peninsula were forced to start the recovery and rebuilding on their own without much assistance from outside for a long period of time. After the roads were opened and starting from the west coast of the Peninsula, assistance has gradually been provided.  Partially due to this geographical issue, the east coast of the Peninsula has been much less covered by aid/assistance than the west coast. Yoriiso-hama of the Oshika Peninsula, located the furthest away on the east coast, was the least supported amongst all the ports of the Oshika Peninsula.  Japanese Emergency NGO (JEN) worked on assessing the condition and needs of Yoriiso-hama once it had been selected and presented to Real Medicine Foundation as the most in need of assistance.

More than 20% of the residents’ housing was affected by tsunami damage to the village and those who lost their houses have been relocated to transitional shelters further in-land. 90% of the residents are involved in the fishing industry. Despite the difficulties encountered and the population-drain from the area, decreasing the total population of the village from 411 to 350, the remaining residents are devoted to rebuild the community and restart the aqua-farming of sea squirts and boat-fishing.

100% of the remaining fishermen in Yoriiso-hama had already restarted aqua-farming prior to JEN’s assessment of the area. Preparation for aqua-farming of sea squirts and scallops had been at a reduced scale, while boat-fishing remained to be much lower than usual at the time of JEN’s initial assessment.  The rebuilding and harvesting of most of the new aqua-farming fisheries will probably take a few years. A previous income generation program for fishermen in this area, subsidized by the government, first came to an end in October 2011 and had been extended briefly until March 2012.

The direct beneficiaries of this project were the population of Yoriiso-hama.  The indirect beneficiaries are the general populations of Yoriiso-hama and other nearby villages.  Through this assistance the populations of this area will have alternate livelihoods to the only other option previously available, daily debris removal subsidized by the government. As a result, this population is more likely to stay in Oshika Peninsula and contribute to the reconstruction. Also, these households will participate in other community activities such as monthly beach cleaning, which will be a condition of receiving assistance from this project.

The Fishery Assistance Support Project aimed specifically to support the reconstruction of aqua-farming of sea squirts as the major source of income, through the provision of necessary equipment for the onshore operation of the Fishery Association of Yoriiso-hama on the Oshika Peninsula.   The purchase and delivery of equipment and coordination of the port activities was carried out by JEN between October 1st and December 31st, 2011.

Large tents are used for an activity called Mimi-tsuri, opening a small hole in each shell of sea squirts and thread them with a string. This operation is one of the preparation steps for sea squirt aqua-farming and almost all family members of fishermen households are engaged in this common activity along the coast for some months.

Photo: Tents, for port operation and as a place for fishermen’s gathering

Many local part-timers are also hired for this process. The prepared shells number in the thousands, and will all be fully used for this year’s aqua-farming. The tents will also be used in other general port-operation meetings and activities throughout the year. A permanent building was not provided because the coast line of the Oshika Peninsula has experienced severe land sinkage and is thus far left alone with emergency rehabilitation only.  The tanks purchased are used for both, preserving live caught fish or as small equipment/tool storage.

The equipment purchased will enable the fishermen’s family members, who also work in the port’s operation, to gather again at the common operation hub, helping residents to reconnect and communicate on a daily basis, regaining a sense of community.

Forklifts and pallets are used for both, the main port operations and for tsunami debris removal work around the damaged port. Residents are able to perform much more efficient work with one small forklift that survived the tsunami, another one purchased with Metabolic Studio/ The Annenberg Foundation funding.

Outcomes of the Project

Livelihood Recovery
Although limited in scale, fishermen in Yoriiso-hama have started the sea squirt aqua-farming activities which generally produce JPY 2,400,000 (USD 31,600) in annual income through JEN’s provision of tents, tanks, forklift and pallets to be used for preparation work, funded by this Metabolic Studio/ The Annenberg Foundation grant.
There are families who seriously considered giving up fishery as a livelihood and moving out of the area that have now restarted the fishery activities because of the project assistance.

Building Sense of Community
The Tent donation has created a common operation area where fishermen, their household members, and their extended family members can all work together as they did prior to the Earthquake/Tsunami. Providing a place to gather for work has maintained much of the original community that was threatened after many had been relocated to transitional shelters.

Communication as Psychological Care
JEN also dispatched 156 volunteers from the Tokyo area for this operation around Yoriiso-hama. Through communication activities/meetings, local fishermen are encouraged to explain and teach the volunteers on fishery techniques and skills. Many fishermen find a sense of self-confidence reborn through these activities that had been undermined from having lost their family, livelihood and houses.

3) Voice of the Beneficiaries

Residents of the villages have shown a strong will to continue their efforts to restart the fishery activities and they stress that ‘assistance from all over the world really helped psychologically in the first-time-ever natural disaster like this’. 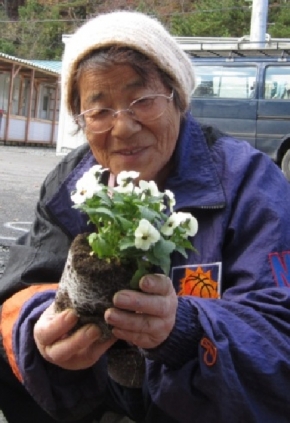 “Our family used to breed scallops on farms at Yagawa-hama, Oshika Peninsula. The tsunami washed away our house, equipment, farm land and rice paddies, and my husband died. Now, I am living with my two sons at this transitional shelter.

The other day, equipment for scallop farming was finally sent to us as a gift. My community has built a small lodge at the port and is now preparing to restart the aqua-farming. The assistance really warmed my heart.”

JEN will continue assistance for at least half a year more in the village while the fishermen earn income from boat-fishing and the breeding of the aqua-farming products is cared for over the longer term. Aqua-farming in nature takes years before the products turn into a harvest. Scallops usually take one year under farm conditions, and sea squirts can take more than three years. JEN has also provided materials to be used for boat-fishing using its own separate funding, which will start in April.

The distribution channels for the aqua-farming production may become an issue in the future since it will be some time before the products are ready to be sold to the market. This dormant period may diminish the existing sales channels for the fishermen, and may also continue to reduce fishermen from the village. To combat this, JEN is researching ways to support the direct sales to other areas and to strategize together with the fisheries.

One other project that JEN is considering centers around reconstruction study sessions/planning by individual villages, and it may require approximately USD 28,481 per village.  JEN will continue close monitoring on the needs of the fishermen villages and existing public assistance and fill the gaps where able. 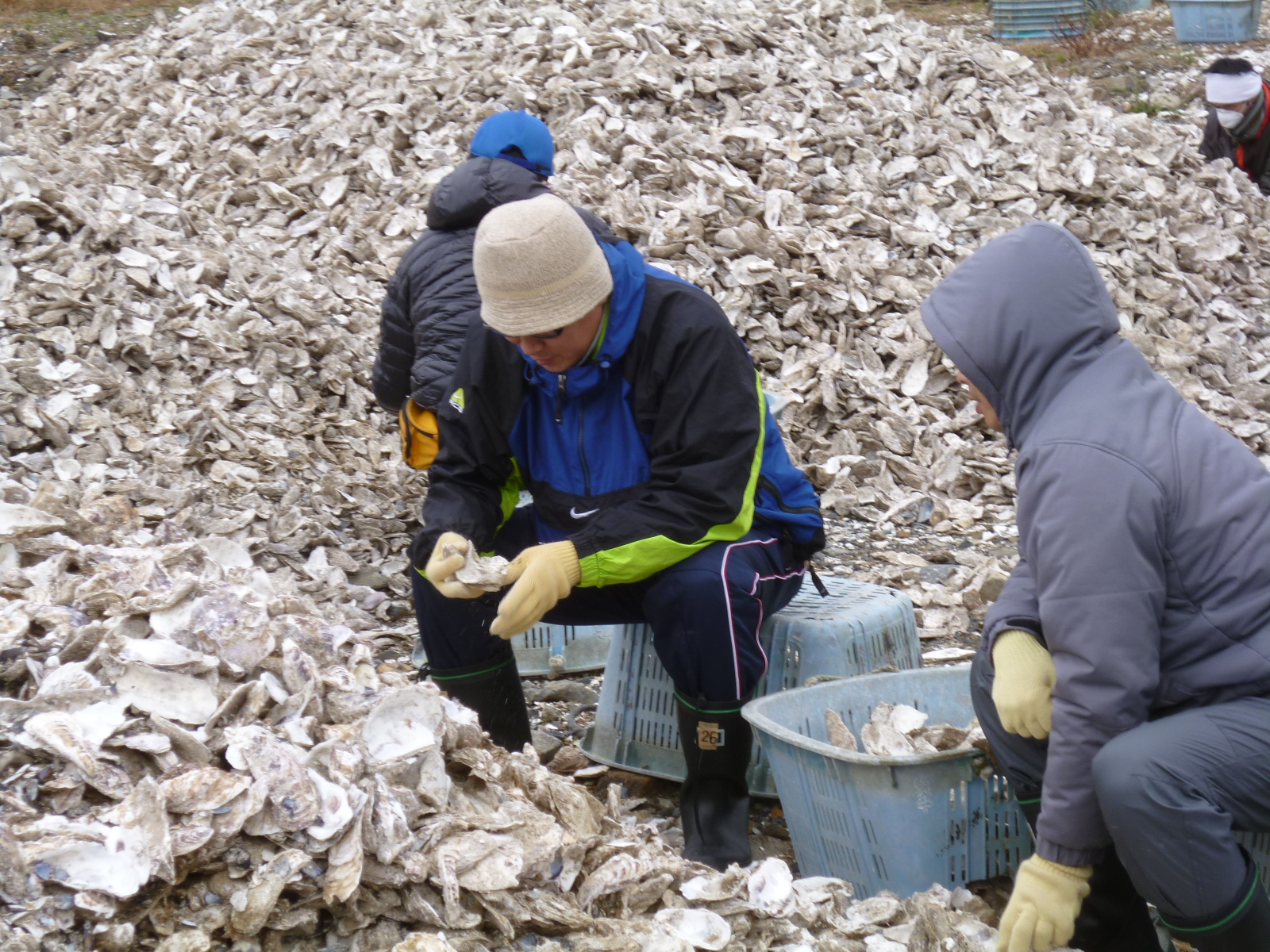