“Thanks God, everything is going very very well!” Says Mr. Paryono, secretary of the Neighborhood Endowment Fund (NEF) from sub-village Pulorejo, village Mlese, at the heart of the earthquake area in Klaten, Central Java. The NEF in Mr. Paryono’s neighborhood was founded on 23 January 2007, supported by the Real Medicine Foundation.

According to Mr. Paryono, there were 28 members and 5 officers when the NEF was founded. The 5 officers took roles as chairman, secretary, treasurer, and two community liaisons. Until now, there is no officer rotation. Membership is based on households – one member represents one household. Mr. Paryono promoted opening membership to all adults in the neighborhood, and has also recently begun offering loans to teenagers on behalf of their families. In the future, he expects membership to skyrocket.

“I am very happy as all members fairly pay the loan as scheduled. Officers have not found a single disobedient case by today.” Mr. Paryono says that his NEF, just like all other NEFs, has rules which were shaped by the community. For instance, each member must pay membership saving Rp.5000 (about half a dollar) and monthly saving Rp.1000 (ten US cents). A member who borrows money up to Rp.500.000 (US$50) must pay interest 1% per month and must repay the loan in 5 installments. Borrowers with loans higher than Rp.500.000,- must pay higher interest. This is due to the limited size of the fund. “If borrowers with higher loans pay the same interest, the poor will not have a chance to borrow money,” he says. Sometimes loan officers allow the poorest of the poor to return their loans in 7 installments. Larger strategic decisions are made at plenary monthly meetings. The first RMF-sponsored endowment in Pulorejo was Rp.2.500.000 (US$250). Before the arrival of the NEF, community members collected money in monthly meetings to support food drives, medical needs, and shelter for earthquake victims.

When Kevin and Jenny from RMF visited Mlese, they gave additional funds to NEF in Pulorejo. “We are really grateful as most families have accessed this loan. This is very helpful. We want to express our gratitude by trying to sustain this capital stock.” By end of February 2009, the NEF in Pulorejo had doubled RMF's fund to become Rp.10.850.000 (US$1085). “I am optimistic that people here can sustain the fund. We have solid officers and honest members,” says Mr. Paryono. 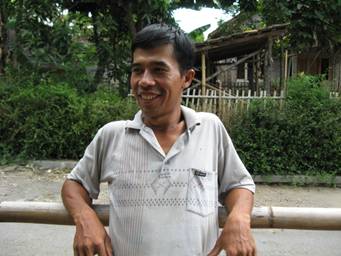 It was 10.25 a.m when KOMPIP came to meet Mrs. Sri Redjeki Punijo. Ibu Sri Redjeki (34) had been busy preparing food for her family. “This morning we eat rice and tempe only. This afternoon we eat vegetables without side dishes.We have to spend money very carefully as life is so difficult,” she said. While cutting some vegetables, she started to speak about the Neighborhood Endowment Fund (NEF), sponsored by the Real Medicine Foundation.

“Before NEF was founded, I had two goats. I worked as a farm laborer temporarily. My husband also worked as construction labor. My husband income was so small. He got Rp15000,- / US$1,5 per day. Sometime life is so so difficult as income is not sufficient to buy some food. Food price increased from time to time. My husband did not always have a job. Order as construction labor is uncertain. He could employ himself for a month but unemployed at another month.

“When RMF and KOMPIP founded NEF in my neighborhood, I borrowed (about $US100).” She and her husband agreed to sell their two goats for a cattle. She took care of the cattle. As a result, now she has two cows. The two cows price at least 12.000.000 (US$1200). “My husband looked for grass while I fed the cows. I usually feed them in the morning and at two in the afternoon.”

When KOMPIP asks about the benefit of NEF, she says that NEF has helped a lot of families in her neighborhood. Beside strengthening eocnomic activities, NEF also helps people afford school fees for their kids. NEF's officers live very close with the people. It is easy to meet them if people need a loan. Interest which is at 1% per month is considered fair and not a burden, especially compared to annualized loan shark rates in excess of 1,000%. NEF interest is redistributed to members every end of fiscal year. 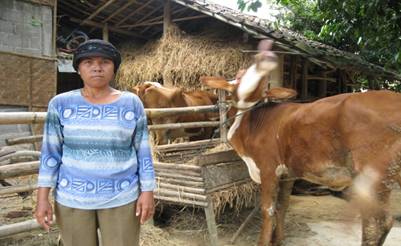 Mrs Sri Redjeki is very proud of her cows.