Two staff members have been hired and have already been on-site for three weeks. Nine out of nineteen RTs (neighborhoods) have had their first of three training sessions, and the other ten RTs are scheduled in the near future. One of three village wide meetings has already taken place, and, as previously reported by Akbar, it was a great success. The women particularly are very interested and involved in the project. 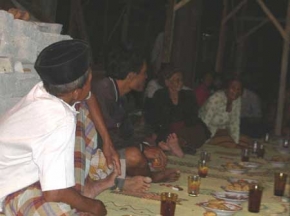 Here are some of the rules and regulations that have been decided amongst RTs:

Within a month, several of the RTs will be ready for grant allocation, and the true beginning of the process.

The Sukimans: Beneficiaries of Community Saving

Mr. Sukiman (43) and his wife Mrs. Parwati (40) are the proud parents of four children. Aris, the eldest son, could not continue his studies at senior high school due to prohibitive costs. He is currently working in nearby Yogyakarta as a brick layer.

Rini Hastuti, the second eldest, is now studying marketing at the local vocational school in Klaten. As she told Real Medicine Foundation representatives, "I study at the vocational school so that after I graduate I can directly find a job." She is currently ranked 7th out of 37 in her class. The Sukimans' third child is Joko Tri Ariyanto, currently in the fifth grade. "I want to be a teacher," he explained shyly, staring at his toes. The fourth child, Bagas Waras, is in the second grade and has lofty ambitions of becoming a pilot. "I want to travel and see the world," he says.

Because of the May 26th earthquake, the family of six now lives in a temporary shelter amidst the ruins of their old home. Life was difficult before the disaster. Now it is daunting. Mrs. Parwati works as a temporary tobacco leaf picker. The work will last only as long as the dry season. She toils from 5:00AM to 11:00AM in the fields, goes back home to cook for her family, and then returns to the fields from 3:00PM to sunset. For over ten hours of labor per day, Mrs. Parwati brings home a mere 5,000 Rupiah, the equivalent of fifty cents. When the wet season begins (early December) and the fields close down, Mrs. Parwati will have to find an alternative source of income. Meanwhile, Mr Sukiman works as a bricklayer in Yogyakarta, the provincial capital of Central Java. He leaves the remains of his house at 5:00AM and returns to Mlese at 6:00PM. When he cannot find a ride (which is often), he bikes two hours to reach his work, where he labors for a full eight hour day. At the end of the day, he gets back on his bike and rides the eighteen miles home. "As a brick layer I receive 20,000 Rupiah per day," he says. When the exchange rates are in his favor, that's a little over two dollars.

The Sukimans' make less than US$3 per day to support a family of six. When jobs are in short supply, their income is less. "Almost everyday our spending is higher than our income," Mr. Sukiman relates. Between two dollars for food, seventy cents for the children's pocket money, and monthly school, books and uniform fees, the family is living in a perpetual cycle of debt and poverty.

Mr. Sukiman is one of the first people to join the Mlese Community Savings Program, funded by the Real Medicine Foundation. He hopes that by borrowing money from the fund, his family can pay back their debt. He realizes that paying back loans by taking another loan is extremely risky. Thus, his family has planned to take their loan in order to open a vegetable stall at their house. Fifteen years ago, Mr. Sukiman attempted a similar venture. Unfortunately, his efforts failed due to what he calls "the careless purchase of non-essential goods." "Now I am grown up and able to manage money. I have learned well in school. I will help my mother and father to manage the money when we open our vegetable stall", says Rini, the vocationally trained daughter. "We need mentoring from RMF and KOMPIP in this effort so that we will not fail again," says Mr. Sukiman.