mHealth Alliance visits and writes about our Malnutrition mHealth program

Chelsea Hedquist, the Senior Communications Officer at mHealth Alliance, just visited our Malnutrition mHealth Program in Barwani on her tour of India and wrote the following article about the tremendous positive impact that mobile technology can have on health outcomes. Link to article here or read below.

The second stop of my 10-day, 6-city journey across India took me to a village called Barwani, approximately three hours southwest of Indore in the state of Madhya Pradesh. As with other stops along the way, my purpose was to visit the site of a mobile health project that the mHealth Alliance supports through our Innovation Working Group catalytic grant program.I traveled the bumpy road to Barwani, watching the landscape around me grow increasingly mountainous and rugged. When I arrived to the India office of the Real Medicine Foundation (RMF), the Country Director Michael Matheke-Fischer greeted me and cheerfully asked whether I’d had a pleasant ride, assuring me that the road I’d traveled on was many times smoother than some other roads in the area. 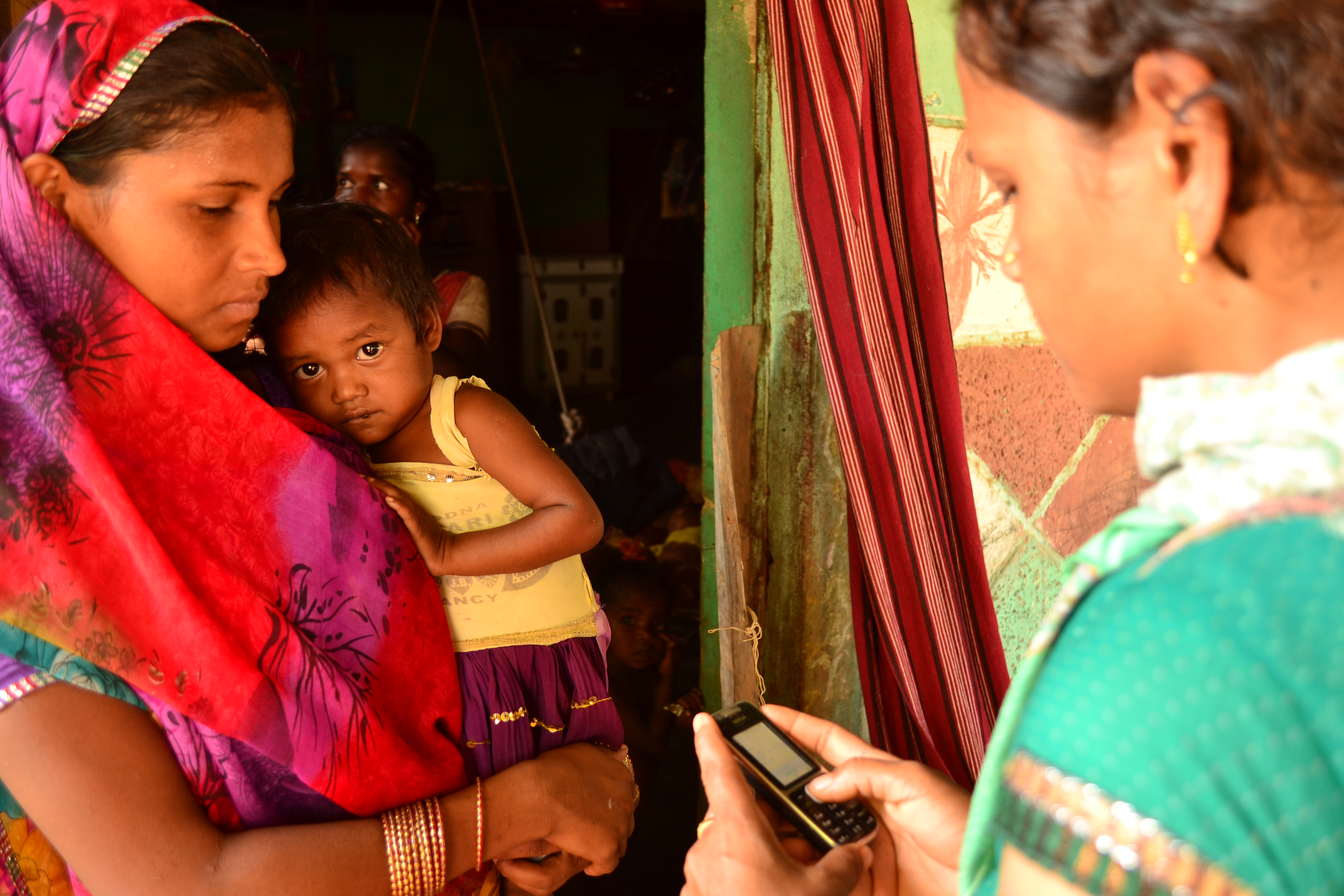 Michael would know, having lived in India since 2006 and having worked in some of the country’s poorest and most remote areas. He and his team in the field cover a huge geographical area that encompasses 600 villages in 5 districts. RMF works with the national and state governments on the largest community-based malnutrition treatment and eradication program in Madhya Pradesh. Through a team of 61 Community Nutrition Educators (CNEs) – similar to community health workers – RMF makes regular visits to hundreds of villages to conduct simple tests for malnutrition in children under age five, such as taking upper arm measurements to identify Moderate and Severe Acute Malnutrition (MAM and SAM). CNEs provide immediate care, refer severe cases to the nearest health facility for intervention, and also play the important role of health educators, helping communities understand best nutrition practices. This is vital work in a place where the Global Acute Malnutrition (GAM) rate is over 30 percent – 15 percent is generally considered an emergency situation.

In 2011, RMF partnered with IWG grantee Dimagi to transition from paper-based data collection by CNEs to a mobile phone application based on Dimagi’s CommCare platform. This application allows each CNE to conduct visits using a series of predesigned forms installed on the phone. As the CNE inputs answers, the data is stored and automatically uploaded to a central database in real time (as long as the phone has network connectivity). The CommCare app was originally piloted with 10 CNEs during a 3-day workshop, but in May 2012 it was expanded to all 61 educators. The CNEs have been enthusiastic about adopting the technology, and the results have been impressive. Since 2012, the CNEs have reported 12,865 cases via CommCare and RMF has seen improvements in the accuracy and completeness of data, the efficiency of reporting, and the level of accountability among CNEs. RMF and Dimagi have plans to improve the app and possibly even migrate it to Android technology in the future. 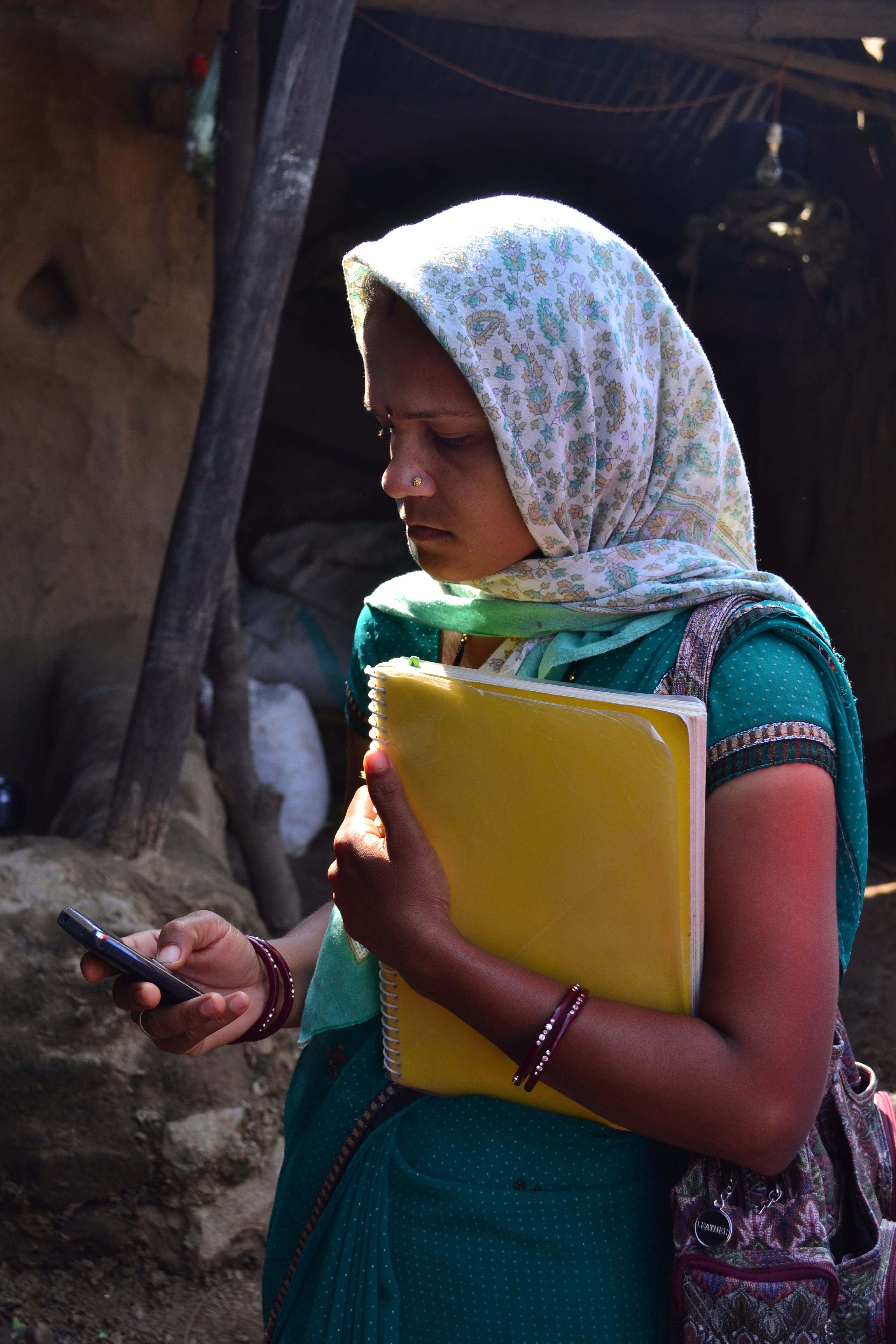 During my time with RMF, Michael and Natasha Azad from Dimagi gave me the unique opportunity to shadow a CNE as she made visits to a village in Barwani. We ducked out of the hot sun and into the shade of huts in the village, and I watched – impressed – as the CNE interacted with community members and adroitly used her mobile phone to record and transmit their responses. The children looked on in interest as her fingers tapped away at the keys and she shared important information about nutrition with their parents and caregivers. As a mother of young children, I was equally captivated by the children, themselves, with their beautiful eyes and shy smiles.

However, one thing that struck me and has stayed with me since that visit was how still and calm the children seemed compared to, for example, my own rambunctious two-year-old. When I mentioned this to Natasha, she sadly told me, “It’s because they literally don’t have enough energy to be active.” In other words, the little girl standing silently with her hand clutching her mother’s sari was not simply shy or demure – she was malnourished and, thus, unable to play with the kind of enthusiasm and gusto that we see from children who are properly nourished.

When you see the beautiful children of Barwani, it’s easy to understand why RMF’s work here is so important. Mobile phones and Dimagi’s CommCare platform are making it easier to identify, track and treat malnourished children – one powerful example of the ways that mobile technology can have a tremendous impact on health outcomes for some of the world’s most vulnerable people.

Chelsea will be sharing additional stories from her travels in India in the coming weeks, so make sure to check back to read more from the “mHealth in Action” blog series. Read the first part of the series here.