RMF India's HIV/AIDS program was started in 2006 and is now providing HIV/AIDS awareness, prevention, counseling, testing, and treatment services to hundreds of community members per month. We have developed the most integrated public private partnership (PPP) HIV/AIDS services set-up in the state of Madhya Pradesh with a PPP Integrated Testing and Counseling Center, PPP Link Antiretroviral Treatment Center, and a ‘DOTS’ treatment center for tuberculosis (often occurring in HIV+ patients). Our care and support program currently assists 229 HIV positive individuals with medical, psychosocial, and livelihood generation services. We specifically tailor our prevention and care programs to the needs of the tribal communities that we work with, addressing the needs of vulnerable populations such as children, migrants, truckers, and female sex workers.

2010 was a year of rapid growth for RMF’s HIV/AIDS Prevention and Care program and also one filled with challenges. We added two ambitious new programs, a UNFPA funded Targeted Intervention for Female Sex Workers and an Madhya Pradesh State AIDS Control Society sponsored Targeted Intervention for migrants at source districts. While focusing a lot of energy on new programs we were still able to maintain the quality of the Care and Support program, expanding our services to more patients as they were identified through our teams’ outreach efforts. Through outreach efforts and our close connections with the community we were able to identify 84 new HIV+ patients and facilitated all 84 of those patients to register with the ART Center in Indore. Throughout the year we saw a total of 68 patients begin ART treatment. The year had its set-backs as well, with 6 of our AIDS patients dying from and having to spend time with their families to help them understand their loss. While each death is an enormous blow to program staff, we also had reason to hope: one of our HIV+ pregnant ladies, who had had 4 pervious still births, gave birth to a beautiful, healthy, and HIV negative little boy with the help of our program staff and her dedication to adhere to her Prevention of Parent to Child Transmission (PPTCT) protocol. 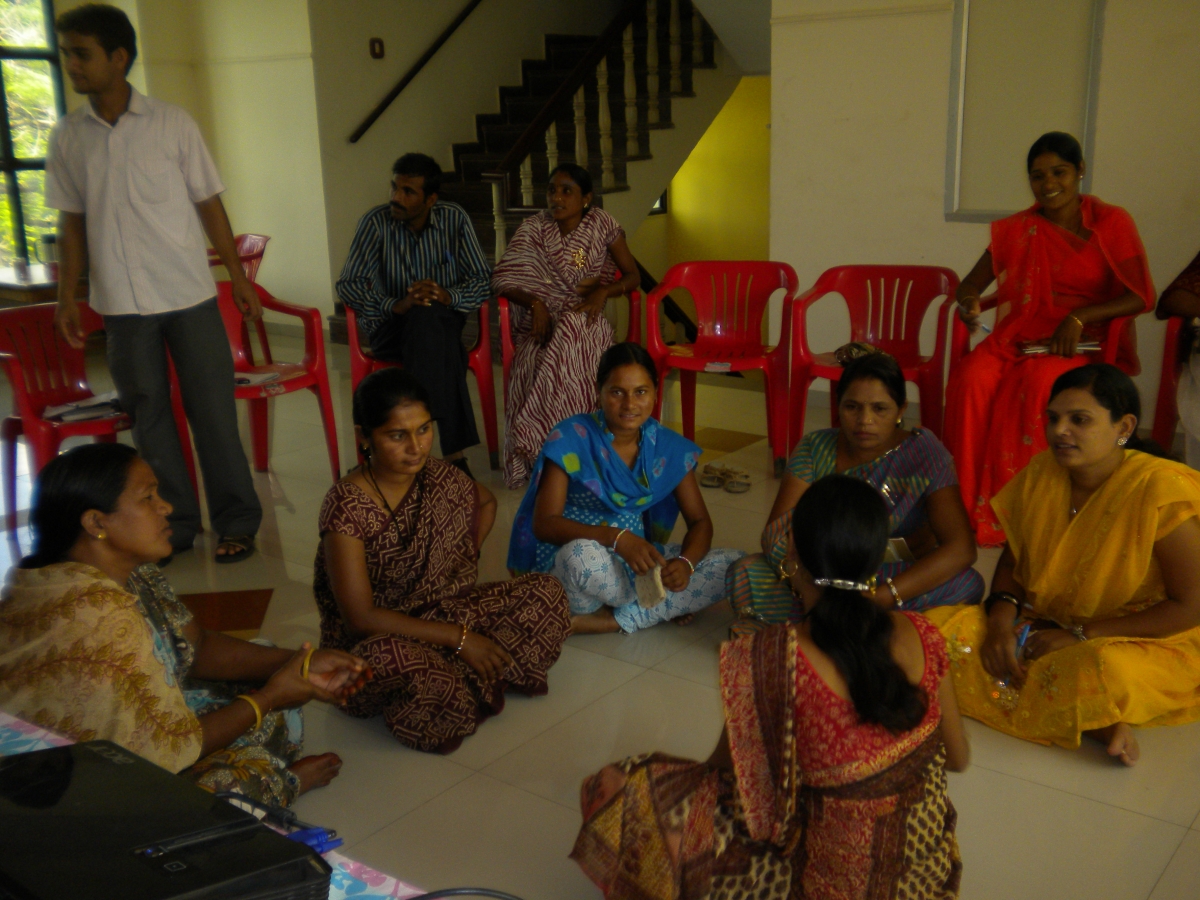 Real Medicine Foundation is now looking forwards to an even more successful 2011, with increased outreach efforts and to building a stronger HIV/AIDS infrastructure in Jhabua and Alirajpur together with the government and partners. The following is a review of our successes and challenges in 2011.

RMF’s HIV/AIDS Prevention and Care and Support program aims to provide the most comprehensive package of services and support to our network of People Living with HIV/AIDS (PLHA) and vulnerable populations. Leveraging government resources through public private partnerships and advocating for patients using our large national network, RMF aims to provide PLHAs in Jhabua and Alirajpur districts with the same level of services available to other individuals in more affluent areas.

In addition to Care and Support services, RMF aims to increase the coverage of HIV/AIDS prevention and awareness services to vulnerable communities such as female sex workers and migrants throughout our communities.

Impact of project on community

This project is the most wide-reaching and successful HIV/ AIDS outreach, testing, and treatment program in Jhabua and Alirajpur districts. The efforts of the outreach workers and staff at the centers are raising awareness, providing treatment and counseling, and working to prolong the lives of a population that previously did not have access to reliable testing and treatment for HIV/AIDS

RMF local staff have established a reputation as honest, knowledgeable, and confidential professionals in HIV/AIDS in Jhabua. Our staff are approached in the market place, sought out at our counseling center, and called by individuals all over the district and surrounding areas with questions about HIV/AIDS prevention, testing and treatment. In society where topics surrounding HIV/AIDS are still taboo, RMF has established a niche that locals feel comfortable with.

In addition to our previous counseling and outreach centre, RMF and JJHSS began a Targeted Intervention aimed at Female Sex Workers (FSWs) in both Jhabua and Neemach Districts. After hiring 12 Peer Counselors, two District Counselors, and Two District Mobilizers, RMF conducted three training programs in conjunction with UNFPA, Madhya Pradesh State AIDS Control Society (MPSACS), and the Center for Health Promotion with our staff about baseline surveying and mapping, sexuality, STI/RTI and women’s health, and HIV Prevention. These training sessions were residential and allowed the team to interact with each other, share each other’s experiences, and learn in a effective, interactive way with inputs from a vast background of experiences.

After the training, the TI began in earnest with the early mapping and baseline identification phase completed. The peer counselors made over 900 linkages in the field and starting referring high-risk individuals to our district drop in centers for counseling and testing. Furthermore, this early phase in the intervention is an important time for our counselors to establish relationships with various stakeholders, not just FSWs, so that we can gain support and encouragement from the community and reach as many high-risk individuals as possible.

The single largest challenge facing our HIV prevention, diagnosis and treatment efforts is the lack of awareness among the surrounding community in Jhabua. Only 35 percent of women and 59 percent of men in rural Madhya Pradesh have ever heard of AIDS.

In addition to the lack of awareness, many of the tribal population in Jhabua are forced to migrate to neighboring states to earn a living. While migrating, the workers are exposed to other bridge populations and high-risk groups and increase their chances of infection. Furthermore, many leave their homes for as many as 9 months of the year, making sustained awareness building, follow up with potential new cases and providing treatment for HIV+ individuals very difficult.

Tribals also face problems in Jhabua due to poor road and transportation infrastructure in the rural areas, limiting their access to health services. Furthermore, primary health centers, are limited in number and often inadequate, especially in dealing with HIV/AIDS (there are one public and one private ICTC in Jhabua, and another Government ICTC in Alirajpur). In addition to the lack of health facilities, there are many indigenous superstitions and cultural constraints that pose a challenge in raising proper awareness and promoting prevention methods.

While Jeevan Jyoti Hospital in Meghnagar, Jhabua district has been Real Medicine Foundation’s partner since the beginning of the HIV program, RMF India will now be shifting services to the Jhabua District Hospital. Over the past 3 years the JDH has undergone a drastic transformation: facilities have been updated, doctors brought in, nurses sensitized, and overall high quality medicine is being supplied. Recognizing these improvements in the JDH and in an effort to ensure long-term sustainability, RMF has decided that the best care available for HIV+ patients in Jhabua district can be found at the District Hospital.

This shift from the private sector to the public sector will not happen overnight. Rather, RMF will gradually work to ensure that the District Hospital is ready to take on the HIV/AIDS program responsibly and will also make sure that PLHAs feel as comfortable as possible with this move.

On a Saturday in April one of our new PLHAs, a tribal woman living below the poverty line in Jhabua, came into our office distraught. Sumitra (name changed) had just found out that she was accidentally pregnant, and while she and her husband had been trying for a child for a long time before they found out that they were HIV+, she was contemplating terminating the pregnancy because of her HIV+ status. Before she found out that she was HIV+ she had had 4 stillbirths and was terrified of having another. As she told us her story the sadness in the room was tangible. She spoke in barely an audible whisper and hung her head low, staring at the ground with utter defeat.

Jimmy and Dr. Toegel counseled Sumitra and her husband that if she adheres to her ART treatment, taking good care of herself during pregnancy, and has a C-section, there is a 95% chance that her child can be born HIV negative. They referred her to a friend of ours who is an expert in PPTCT – prevention of parent to child transmission of HIV – at the nearby government hospital in Indore who will manage her case and with regular ANC checkups, will help to ensure that the child will be born HIV-.

As we gave Sumitra and her husband this counseling, the most beautiful smile I’ve ever seen came over her face. Her dull eyes became suddenly bright. Glowing and grinning ear to ear, Sumitra beamed at her husband. She and her husband had never heard of PPTCT treatment and had no idea that its possible for their child to be borne HV negative. The smile of a women who just found out that there is a new chance for life for her unborn child is something beyond words.

Over 6 months Sumitra and her husband were extremely diligent about following all of the doctor’s orders and our counseling advice. The expecting mother was religious about taking her ART medication and made sure she ate for two. When the time of her due date came near, the family went to Indore, the nearest ART center for delivery.

On September 9th, two HIV+ individuals welcomed a beautiful, healthy, 2.6 kg, little boy. Before even calling his family to tell them the happy news, the father called Devika, our HIV counselor who had been with the family every step of the pregnancy, to tell her the news. With dedicated staff such as Devika, our counselor and the Indore ART center staff and the miracle PMTCT drugs available in India today, a tiny life was saved.