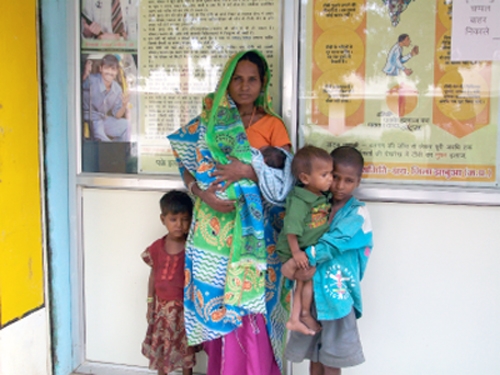 Sugna and her 4 children in front of RMF’s Integrated Counseling and Testing Center (ICTC) at Jeevan Jyoti Hospital in Meghnagar, Madhya Pradesh

Life for the rural populations in Jhabua living on less than a dollar a day is incredibly difficult. Drought, corruption, money lenders, broken government promises, migration, loss, sickness are all too common facets of daily life for rural India. A HIV positive diagnosis only compounds these problems with social stigmas and the burden of life-long treatment and hospital visits. In light of these sometimes seemingly insurmountable challenges, success stories are not so easy to come by for the RMF team in India.

Sugna and her husband Kalu were diagnosed with HIV at Jhabua district hospital last year. At the time, their son Neelesh was just 6 months old and was already demonstrating the signs of HIV. Over a series of intensive counseling sessions, RMF’s counselor Jimmy urged them to register at the ART center in Indore and to have their son seen by experts in pediatric HIV there. The family agreed and arrangements were made for RMF to take the family to Indore.

Then overnight, the family disappeared. On inspecting their boarded-up house, Jimmy learned from neighbors that Kalu was in trouble with money lenders who had given him an advance on labor he was to do in Gujarat. The money already spent, the family was forced to move overnight to pay back their debt. In Gujarat and other surrounding states, migrants can make double the wages that they make in Jhabua and so entire families often migrate for 9 months of the year. While their wages may be higher, they often have little to no access to health or social services while they are gone.

For one year RMF staff tried in vain to locate Sugna and Kalu. They spoke to neighbors, family, fellow migrants, and NGO and government staff in Gujarat. No one knew where the family was.

Then a few days ago, Sugna’s neighbors called Jimmy to tell him that Sugna had arrived back in Jhabua with her four children. Jimmy was at their house within an hour and was surprised to see that in the past year Sugna had had another child who was just days old. She received no antenatal care while in Gujarat, let alone any services for prevention for mother to child transmission. Sugna was feeling very ill, couldn’t work anymore, and was worried about Neelesh, now 18 months, who was too weak to walk.

Sugna agreed to get HIV tests for her 3 older children and to start her baby on cotrimoxazole profalaxis right away (the National AIDS Control Organization, NACO, recommends that all children born to HIV positive mothers be started on cotrim until their HIV status has been confirmed at 6 weeks). Out of Sugna’s older children, just the severely malnourished Neelesh is HIV positive. HIV positive children are often severely malnourished because HIV expends so much of the little energy they have. We hope that after a few weeks on antiretroviral therapy, Neelesh will start gaining weight and getting back on a normal growth cycle. 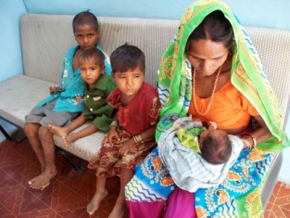 Kalu is still working in Gujarat at a stone crushing facility and refused to return to Jhabua with Sugna. Sugna assures us that now she is ready to stay and to take care of her family. But there will be many challenges. Sugna has a small hut on a small plot of land that will not sustain a large enough crop to feed the family. Sugna can perform few jobs in the area because her weak condition prohibits manual labor. Her parents, also very poor, live nearby but are still angry at her having left without word. She’ll no doubt miss her husband and wonder what he’s up to alone in Gujarat. Once she regains strength, she will be tempted by the higher wages in Gujarat.

RMF is currently doing everything we can to make sure that Sugna doesn’t leave again and that she and her children get the proper care they need. On top of daily counseling and supporting trips to our hospital and the ART center in Indore, RMF is also providing daily nutrition for the family and medicines for the older children’s various illnesses. Once Sugna starts to gain her strength back, RMF and our partner, Pragati, will provide Sugna with a small grant so that she can set up her own business. We’ll try to help Sugna earn as much here in Jhabua as she would migrating to Gujarat to reduce temptation to leave. Now that we know where Kalu is, we’ll also reach out to him to counsel him on the importance of adhering to ART therapy and protecting against the spread of HIV. And if Sugna does decide to go to Gujarat again, we’ll do our best to make sure that she is linked to the ART center and NGOs working on care and support there.

Stay tuned and help us turn Sugna’s tragic story into a success story.