To reduce the prevalence of underweight children under 5 years old and to reduce child mortality from malnutrition by strengthening communities and village level government facilities’ capacity to identify, treat, and prevent malnutrition.  This project aims to prove that a holistic, decentralized, community-based approach to malnutrition eradication will have better health outcomes, be more inclusive for children under 5 and will be more cost-effective in the long-run than centralized approaches, especially for rural, marginalized tribal communities. 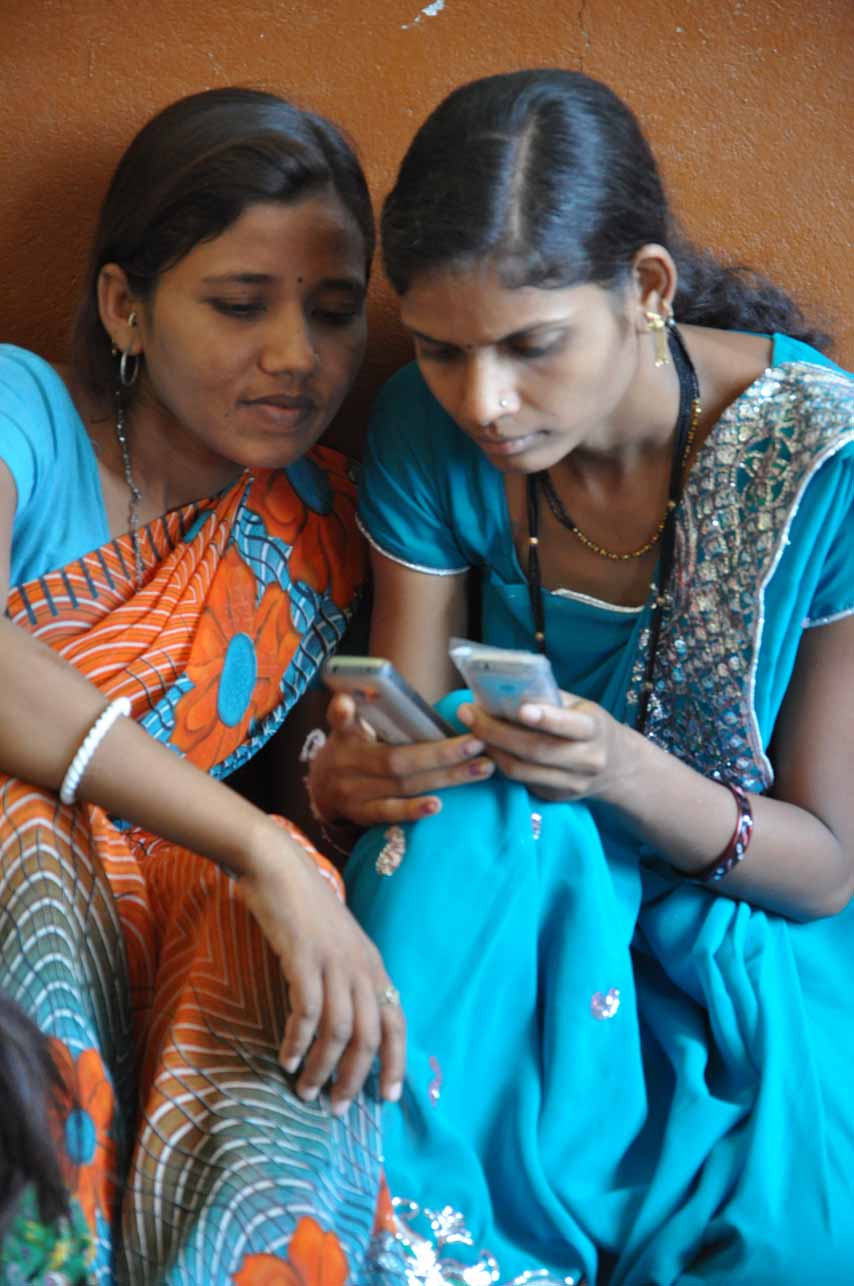 Photo: Two of our Community Nutrition Educators learning to use the RMF/Commcare mobile phone survey tool.

This project empowers communities through health literacy and connects rural communities with the government health and nutrition services available.

In Year Three of this program, RMF does not just act as a catalyst mobilizing communities to the resources available, but also works on a more intimate level with government health and nutrition workers and Village Health and Sanitation Committees to help build their capacity towards social mobilization, referrals, and provision of effective nutrition counseling.  Throughout this year RMF will gradually transfer the responsibilities of our CNEs to government supervisors and Anganwadi workers, helping integrate RMF’s work into the government framework to ensure long-term sustainability.

Project Objectives during this reporting period:

Summary of Merck-sponsored activities carried out during the reporting period under each project objective:

During the First Quarter of 2012, RMF’s Malnutrition Eradication Program continued to be a strong presence in Madhya Pradesh(MP). The CNEs are continuing their day-to-day activities of counseling, identification and referrals, while RMF staff work to improve the rollout of Madhya Pradesh’s Atal Bal Mission state nutrition mission (ABM). By collecting feedback on the implementation of the ABM in our 5 target districts, and presenting our findings to policymakers in Bhopal, RMF is integrating field level observation with our model to change the landscape of malnutrition treatment in MP.

In parallel, RMF management staff also worked diligently towards securing the permissions required for the upcoming CMAM (Community Based Management of Acute Malnutrition) pilot using Ready to Use Therapeutic Food for community based treatment of malnutrition in our target villages.

RMF’s academic partner, the Indian Insititute of Health Management Research (IIHMR), held a meeting of their Ethical Review Board (ERB) on March 13, 2012. Following this meeting, RMF’s pilot proposal was granted ethical approval, one of the last steps required in order for our pilot project to succeed.

On March 1, 2012, RMF presented our revised pilot to officials from the Government of Madhya Pradesh, UNICEF, the UK’s Department for International Development (DFID), Valid International, and Action Against Hunger. Based on the inputs provided by all of these stakeholders, RMF is working on best integrating our pilotinto the state strategy outlined by Madhya Pradesh’s ABM nutrition mission.

After a successful demonstration of CMAM with RUTF, RMF hopes to change the landscape of SAM treatment in India. Previous programs using RUTFin Africa and other Asian countries have shown that, with proper counseling and monitoring, the use of RUTF in CMAM programs has a success rate as high as 80%.

Following the successful completion of our pilot study using mobile phone based data collection through Commcare, RMF and Dimagi Inc. have agreed to expand our partnership to include mobile data collection from all of our CNEs. After donating 70 mobile phones for our project, Dimagi will also send a field fellow to help train all of RMF’s CNEs with the Commcare technology.

As demonstrated by the pilot rollout, Commcare enables more accurate and versatile data management and analysis than our current paper based system. Although accurate, the current paper based data is cumbersome and time consuming, requiring multiple meetings and entries to compile into its final form. With the mobile phone data entry, all of RMF’s info will be available in real-time through on online dashboard for all program staff.

For a a full blog about this program with a complete gallery of photos, click here.

During this quarter the program:

One of the largest challenges facing families in RMF’s target districts is the semi-arid climate of the area. Although the soil is quite fertile, and seasonal farming provides most families with a basic livelihood, the dry season forces many families to migrate to city centers and construction sites for labor jobs to supplement their income.

In Chervi village in Meghnagar block of Jhabua District, Anitha’s family faces the same problem. Three generations live in the same house, working their land in the rainy season to grow corn, wheat, and other crops. In addition, the family also has livestock, keeping three buffaloes for milk and labor.

Even with this stable source of income, Anitha’s parents choose to migrate for much of the year to work on road construction projects in neighboring Rajasthan. In order to maximize their earnings, the family travelled with their children, including all of Anitha’s brothers and sisters. Unfortunately, 18-month-old Anitha, who was already on her way to severe malnutrition, was left behind in the care of her grandmother. 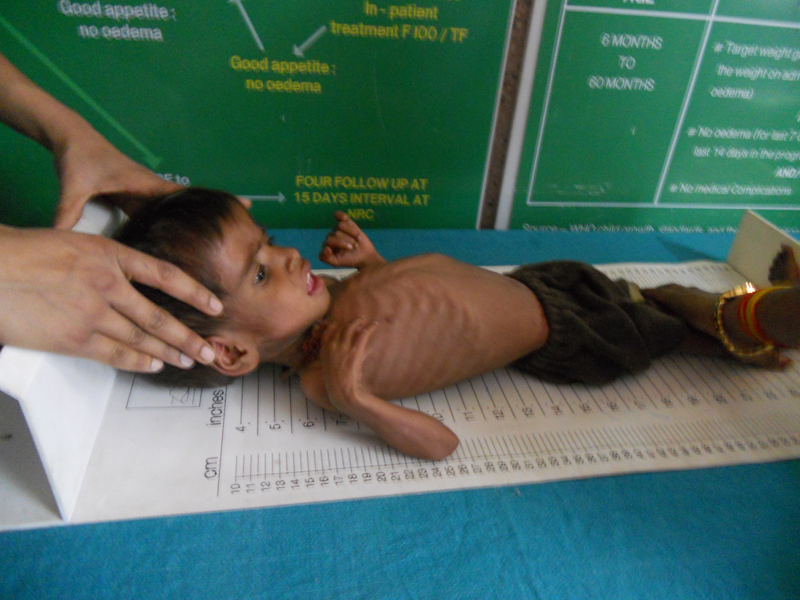 Photo: Anitha on Admission to the NRC

RMF CNE Premlata had already watched Anitha recover from malnutrition once before. Under her counseling and guidance, Anitha had spent 14 days in an NRC over a year ago to recover from her first brush with malnutrition. Unfortunately, because of the family’s travel and the burdens of her cousins, somehow Anitha slipped back into SAM. During a regular spot check to the village, Premlata brought the whole RMF team to help with Anitha’s case.

Anitha’s grandmother was reluctant to bring her to the NRC because of her obligations at home. In addition to her cattle, she also had to care for Anitha’s cousins, whose parents were also migrating, and her ailing husband. After meeting with her several times and counseling her on the severity of Anitha’s condition, she desperately exclaimed for someone to just adopt Anitha.

RMF staff worked with the village leadership to convince Anitha’s grandmother to at least take her to the hospital for some tests. Once there, the hope was that she would consent to stay and continue with Anitha’s treatment. Unfortunately, that was not the case.

After one night, the grandmother was insistent on leaving the hospital. Even though doctors explained how critical Anitha was, her grandmother was under tremendous pressure to return to her village.

All too often in these communities families are faced with impossible choices. How do you balance the work required to keep the whole family alive and healthy while staying for 14 days in the hospital? Without support, who can care for the elderly members of the family? Who will cook the meals for the other children whose parents are away for work?

Unfortunately, faced with these challenges, Anitha’s grandmother chose to leave the hospital.

Since the beginning of our program, RMF has worked diligently to maintain partnerships and relationships with the district government and officials working on child health and malnutrition. Without their support, RMF’s work would be impossible. In addition, as RMF works towards integrating our model into treatment of malnutrition across the state, feedback from our government partners is critical for our success. Faced with Anitha’s situation, this partnership was about to reach a new level.

After several consultations, the district administration decided to take responsibility for Anitha’s case. Between the Chief Medical Health Officer (CMHO), District Program Officer for Women and Child Development (DPO-WCD), and the District Collector (DC), a plan was put in place to monitor Anitha’s care throughout her stay in the hospital. Anganwadi workers from nearby villages were engaged to stay with Anitha during the day. Auxiliary nurses and other health staff were dispatched to stay with her at night. Between both departments and RMF, over 15 individuals took personal responsibility for Anitha’s recovery. 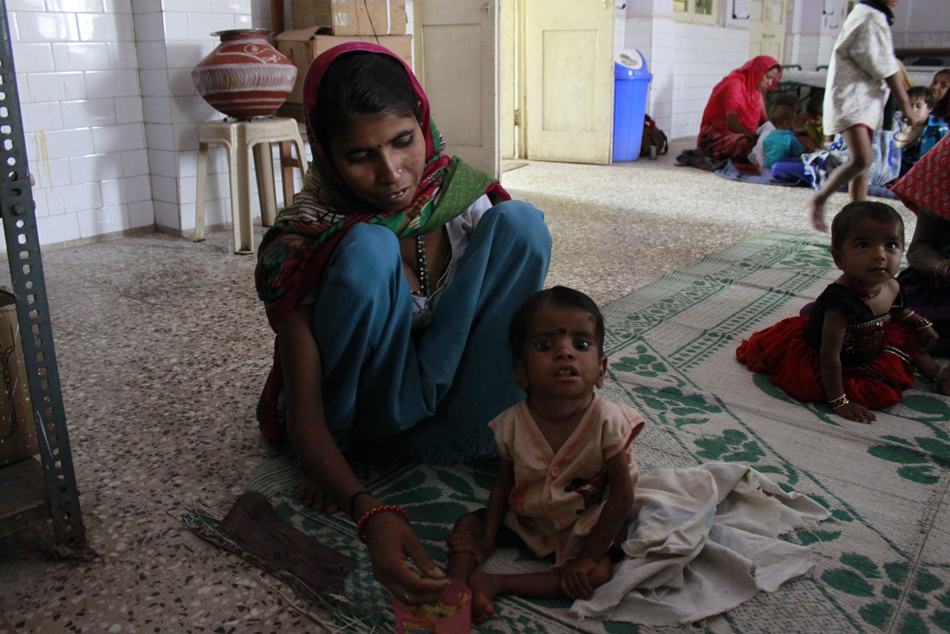 Photo: Anitha with her mother 2 weeks after admission

In addition, the block administration in Meghnagar worked towards finding Anitha’s mother. Mobile phone coverage is rare and many of the migrant workers are nearly impossible to reach while on migration, but somehow word of Anitha’s condition reached her mother. After several days of trying, Anitha’s mother reached the Jhabua NRC to assume care of her daughter. In addition to the wage supplementation the family received while in the NRC, she was also given an additional assistance package from the District Collector to help offset her lost income.

While Anitha has a long road to full recovery ahead of her, her case is the best example of what resources can be mobilized to save a child’s life. Without the strong relationships in the community, with the district government, and with individual government workers, RMF’s efforts and intervention would not be possible.

While Anitha’s story is one of many successes, her path to recovery is the best example of many individuals striving for her survival