Widespread malnutrition in Madhya Pradesh, India – A note from the field

Malnutrition is one of the most serious and large scale health problems facing the Indian state today:

Children with severe acute malnutrition have extremely high mortality rates, between 20-30%2 – a rate of death approximately 20 times higher than well-nourished children. Malnutrition is closely tied to MP's infant mortality: one of the highest in India, with 72 out of 1000 children dying every year. This rate translates into an estimated 130,000 children who will die every year. Malnutrition is one of the largest contributors to this alarming rate, constitutes 22% of the country's disease burden because it severely weakens a child's immune system, raising their mortality rates from common diseases such as pneumonia, malaria, and diarrhea.

Malnutrition is rampant throughout almost every town in southwestern MP. While traveling through the districts of Jhabua, Alirajpur, Khandwa, and Khargone this June we found malnourished children in every other household at best, in every household at worst. 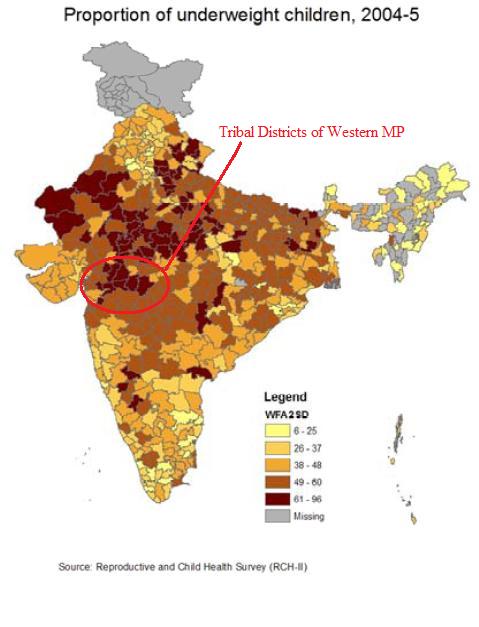 Madhya Pradesh not only has the highest rates of malnutrition in the nation, but also the accompanying highest rates of severe acute malnutrition (SAM). The District Family Household Survey (DFHS-III) estimates that nearly 12% of children under 5 in MP have SAM. This amounts to nearly 1.3 million children who are dangerously underweight. Considering that the medium case fatality for SAM in India is 23.5% (IAP 2006), it is likely that over 300,000 children will die this year from malnutrition. There are also another 1 million children in MP who have moderate acute malnutrition (MAM) and who can become severe after just one bout of illness.

The field reality in Southwest Madhya Pradesh matches the statistics. In many villages we visited, 9 out of every 10 children we screened had some degree of malnutrition, with roughly 2-3 out of 10 children presenting with severe acute malnutrition.

Looking forward, a cause for great concern:

The current situation right now in Southwestern MP is alarming, especially in the context of the deaths reported last year during the monsoon season. We can only expect this year to be worse. Seasonal migration, the economic effects of the delayed monsoon, a particularly bad harvest last year, and higher food prices this year all will compound the already dire situation.

Local NGO workers in Khandwa give the season between June and October the dramatic but not inaccurate title, “the season of death.” Each year the monsoon comes at the time when families are the most food insecure, running towards the end of their stocks from the last harvest. The monsoon brings back migrants who were away from their villages for seasonal labor where they often become malnourished because of the higher food prices and unsanitary conditions in the major cities where they migrate. The monsoon brings with it the yearly bout of waterborne diseases, diarrhea, and pneumonia. Entire families are required to work during this period, leaving young children the most vulnerable to improper feeding and care.

According to data collected by the NGO Spandan in Khandwa, last year over 55 children died in just 22 blocks that were monitored and recorded in the Khalwa block of Khandwa. There is nothing unique about the Khalwa block besides the fact that it was closely monitored. Similar conditions are found throughout tribal MP and similar death tolls can be expected throughout Southwestern MP.

The monsoon and all the waterborne diseases that it brings will cause a massive spike in malnutrition cases like it does every year. This year the monsoon will also bring with it, economic woes that will further limit individuals’ ability to prevent and treat malnutrition. The monsoon is already a week late and isn’t expected until the end of June. This late monsoon has the potential to cause an economic crisis for some families. I observed while driving through many of the states in Southwest MP that many farmers have already planted their seeds, anticipating a timely monsoon. Even with a week to 10 day monsoon delay and with the current heat wave, there is a good chance that those farmers without irrigation (the majority) may lose their seeds before the monsoon comes. If this occurs, these farmers will have to take out loans to get new seeds, putting them further into debt.

Despite a renewed focus on malnutrition by government, media, and NGOs in Southwest MP, there has been little improvement from this year to last year.

In a study conducted by the Bhil Rural Community Health Centre in Jhabua3, it was found that only 10% of the children screened for malnutrition recovered from May 2008 to May 2009 (not all children could be relocated in 2009, but the majority revisited, see Annex 1). In only 14 villages we found 609 malnourished children out of 3,115. This 20% malnutrition rate is low for the region, but these are all urban villages located fairly close to the Jhabua market, are somewhat more prosperous than other areas of Jhabua, and are villages who receive access to Real Medicine Foundation and Bhil Health and Literacy Society resources (the RMF malnutrition eradication initiative just launched last month, so improvement who this initiative is still hard to measure). The Jhabua NRC is currently filled over capacity with 21 severely malnourished cases.

In Khargone we’ve seen similar lack of improvement. The Spandan organization did a rapid assessment of 177 children in the Jhirniya block of Khargone in December of 2008 (see annex 2)

When we visited 3 out of 8 of these villages this June we were only able to track down 15 of the children because the majority of the families had migrated or were out in the fields. Out of those 15 children, only one had improved, the majority stayed the same, and 4 got worse.

Spandan also reports that even after all the interventions last summer in Khandwa, child deaths due to malnutrition carried on until November. They report that 6 children died between October and November and that the malnutrition rate remained at above 62% of children under 5 (see annex 2).

Other districts in the area as equally as alarming. Spandan reports that out of 8 villages surveyed in Burhanpur, 12 children had died between June and November of 2009. These villages saw malnutrition rates of 75%, with the overwhelming majority (83%) of families choosing to pay private doctors instead of seeking government help.

Current capacity to identify, treat, and prevent malnutrition is low in Southwest MP

The high rates of malnutrition in this region are especially concerning because of the weak treatment and preventative care infrastructure and services available at the community level. Right to Food estimates that Integrated Child Development Scheme (ICDS) currently only covers 36% of MP’s 0-6 population and 30% of the pregnant women. The Anganwadi workers – village health workers who the corner stones to the ICDS scheme – are absent, officially and unofficially, from many towns. Anganwadi workers we were able to track down were insufficiently trained, had irregular attendance records, and rarely made home visits. Adequate supervision of anganwadi centers appears to be lacking. None of the anganwadi helpers, who spend considerable amount of time with the children had been trained.

This figure is not surprising, given the state of many of the anganwadi centers that we saw throughout Khandwa and the other districts. Anganwadi centers we viewed were dark and poorly ventilated. They most often lacked sufficient stock of essential medicines such as oral rehydration solution (ORS) and rarely had scales. The quality of the food served at Anganwadi centers was extremely poor during the feeding times we observed. The packaged foods served were often broken rice with a few bits of broken daal. Mostly children over two years old would show up alone for food and leave. Pregnant and nursing mothers and their babies were visibly missing from the anganwadi centers.

Anganwadi workers face huge challenges to carrying out all the tasks required of them with limited resources and limited time. In the village of Dhabia in the Khalwa block of Khandwa, the anganwadi center caters to over 90 children on average who come for feeding everyday. With this large number, about the only part of her job the anganwadi worker has time for is to prepare and distribute food. The scale at this center was buried in a back room and brought out for our benefit.

NRCs are already filling to capacity. It is most alarming that out of all the NRCs we visited, only Khandwa’s NRC is using F100 and F75. In all the other centers throughout the country, only milk and some vitamin supplements are being provided. Most children are given mixed diets, with little to no, measurement of caloric intake. We have no way to be sure that the children are receiving the most appropriate diet as outlined by the WHO and IAP. Many families refuse to go to NRCs because of a whole range of issues; they miss essential house and field work, have to leave their other children at home, and are uncomfortable at these centers. Many families will check their child out before treatment is finished, leaving the child at risk for relapsing and further deterioration. Out of at least 20 families I have personally referred to the NRCs, only 1 had decided to stay to receive treatment. NRCs also lack the capacity to treat the overwhelming volume of children who require care. Currently there are roughly 160 NRCs which spread across the state with approximately 2500 beds to treat 1.3 million children.

“Bengali doctors” and “quakes” are making the problem worse

For a variety of reasons, many families are resorting to paying money to private doctors for treatment of severe acute malnutrition and related diseases. The principal reason is that these centers don’t require patients to be an inpatient, so parents prefer one day treatment to 14 days in one place. Many of these families have also been failed by the NRC before. There are countless stories about children who go in and out to the NRCs with no results (currently conducting a survey to measure this). Spandan found that in Burhanpur, 83% of families took their kids to private practioners. Not all of these are bad, but some can be dangerous.

Ramnaray, below, was brought to the NRC 4 times according to his parents. When he kept getting worse and contracting respiratory infections his parents finally took him to a “Bengali doctor.” This doctor burned him with an iron to get right of the infection. His parents and the local villagers believe that it worked. 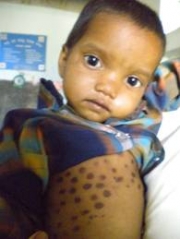 What can be done?

The problem in Southwest MP is overwhelming, but there is plenty of scope to change the situation. Some activities will need to be large scale and coordinated by the government and large NGOs. Even before the official launch of our malnutrition program, RMF and the Bhil Health and Literacy Society have been working actively in a few villages. In Umri, where we’ve been most engaged, we’ve seen a dramatic decline in malnutrition of 37%. This type of pattern can be expected as RMF and other NGOs engage local communities.