Boarding School for Tribal Girl Students in the District of Dhar, India

In December, RMF's Team India recorded the inauguration of a boarding school for 150 to 200 girls in Dattigaon, a tribal village in Dhar District in the state of Madhya Pradesh. The school building, which was mainly funded by a German NGO, Aktionsgemeinschaft Partner Indiens (API), was constructed in association with the Catholic Diocese of Jhabua; the initial architectural design and planning had been provided by Diébédo Francis Kere, a winner of the Aga Khan Award for Architecture and much sought-after engineer of innovative architecture in developing countries throughout Africa and Asia.

The boarding school serves more than ten villages around Dattigaon and provides education to the first-ever generation of girls in the region, all of whom are Bhil, a tribe of India's (casteless) indigenous people. They will study in English and are given the opportunity to pursue high school or even higher education upon completing Kindergarden and eight grades of schooling in Dattigaon. 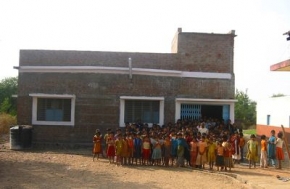 Team India's aim is to continue to establish and expand sustainable health and education services (such as Fabian Toegel's immensely successful implementation of numerous HIV/AIDS testing centers) especially throughout the Jhabua and Dhar Districts, and to build a network to support today's students in their pursuit of higher education or jobs that will enable them to escape the deteriorating situation of poverty, exploitation and diseases among India's rural population.