The Dhar District in the state of Madhya Pradesh has one of the lowest literacy rates of all districts in India, and the majority of its mainly rural population live below the poverty line. In part, this is due to the fact that the district is mainly inherited by Adivasis, the (mostly casteless) native people of India, who live in remote village communities, living off self-supply farming. For thousands of years, these tribes have maintained their unique cultural, religious and social origin. However, particularly due to unfavorable weather conditions and disinterest by society and politics, their life in harmony with nature and the environment is increasingly endangered by growing poverty and exploitation, which in turn result in increasing shortages in nutrition and proper medical care. Hence, medical care, sanitation and awareness programs on the one hand, and school education on the other hand are the two core factors in enabling the Adivasis to lead a life independent from droughts, diseases and money lenders, and to keep them from being forced to leave their village communities in order to maintain a living. To further especially the empowerment and education of women, who still remain the Adivasi children's most important guardians and role models, the Catholic Church's local diocese, architect Francis Kéré, and API, a German NGO, have teamed up to build a girls boarding school in the Dhar District which, due its innovative character, is intended to serve as a model for future facilities in the region.

With its efficient network of boarding schools and dispensaries, the Catholic Church is the most successful of the development agencies operating in the district. There is an unmatched discipline and dedication among the teachers and healthcare personnel in the Church's institutions, whose schools have ranked among the top performing schools in the region for many years. The local diocese draws from the support of many – Christian and non-Christian – supporters in both Districts who hold its ef-forts to improve their living conditions in high esteem. 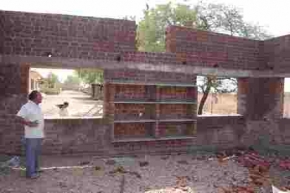 Francis Kéré is an architect from Berlin, Germany, who gained world fame when he received the Aga Khan Award for Architecture in New Delhi in 2004. Growing up in a small village in Burkina Faso, Mr. Kéré has devoted his professional aspirations to developing innovative, cost-efficient and sustainable architecture for third-world development institutions. His passion for India and his conviction that the work of the Catholic Diocese of Jhabua and API provides immediate help to the people they serve have led him to take up this assignment, for which he receives only a fraction of his agency's usual compensation.

API, a German NGO, raises donations in Germany to fund development projects in the Dhar and Jhabua Districts. For almost 15 years, it has operated a boarding school for 900 Adivasi children as well as a medical station and various agricultural programs in the Jhabua District, and has financed and supervised the construction of several school buildings in the region.

The boarding school will be constructed in the village of Dattigaon, located about 30 miles from the city of Jhabua. Operated by the Catholic Church, the institution will host 150 girls from approximately 20 surrounding villages; a boys hostel is already in place. The children will be taught from grade 1 through 10 according to the Government's standard curriculum. This includes English classes as well as all subjects necessary to prepare them to proceed to schools of higher and even academic education. Due to Mr. Kéré's modular concept, the boarding school can be expanded continually to admit more girls. 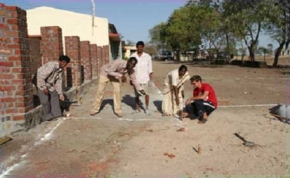 Francis Kéré (second from the left) and aid workers of the Catholic Diocese of Jhabua and API mark the boundaries of the school building.

The building itself is intended to serve as model for future facilities in the region. Mr. Kéré's architecture combines functional, cost-efficient and naturally air-conditioned construction with the use of local materials and an involvement of all stakeholders in the planning process. For instance, expensive concrete is largely replaced by local stones collected in the villages of the girls who are to be educated in the school. At the initial stage, the building will comprise three spacious rooms for sleeping and classes, and a roofed and therefore shaded outside resting area. It will be located in close proximity to the supervisors' dorm and a newly-built solar kitchen.

Funded by donations provided to API by corporate and private benefactors in Europe, construction costs are not to exceed USD 30,000. Mr. Kéré's agency will keep its costs below USD 5,000. This means that the total costs of the building, which would cost approximately USD 45,000 if constructed in traditional ways, will not exceed USD 35,000.