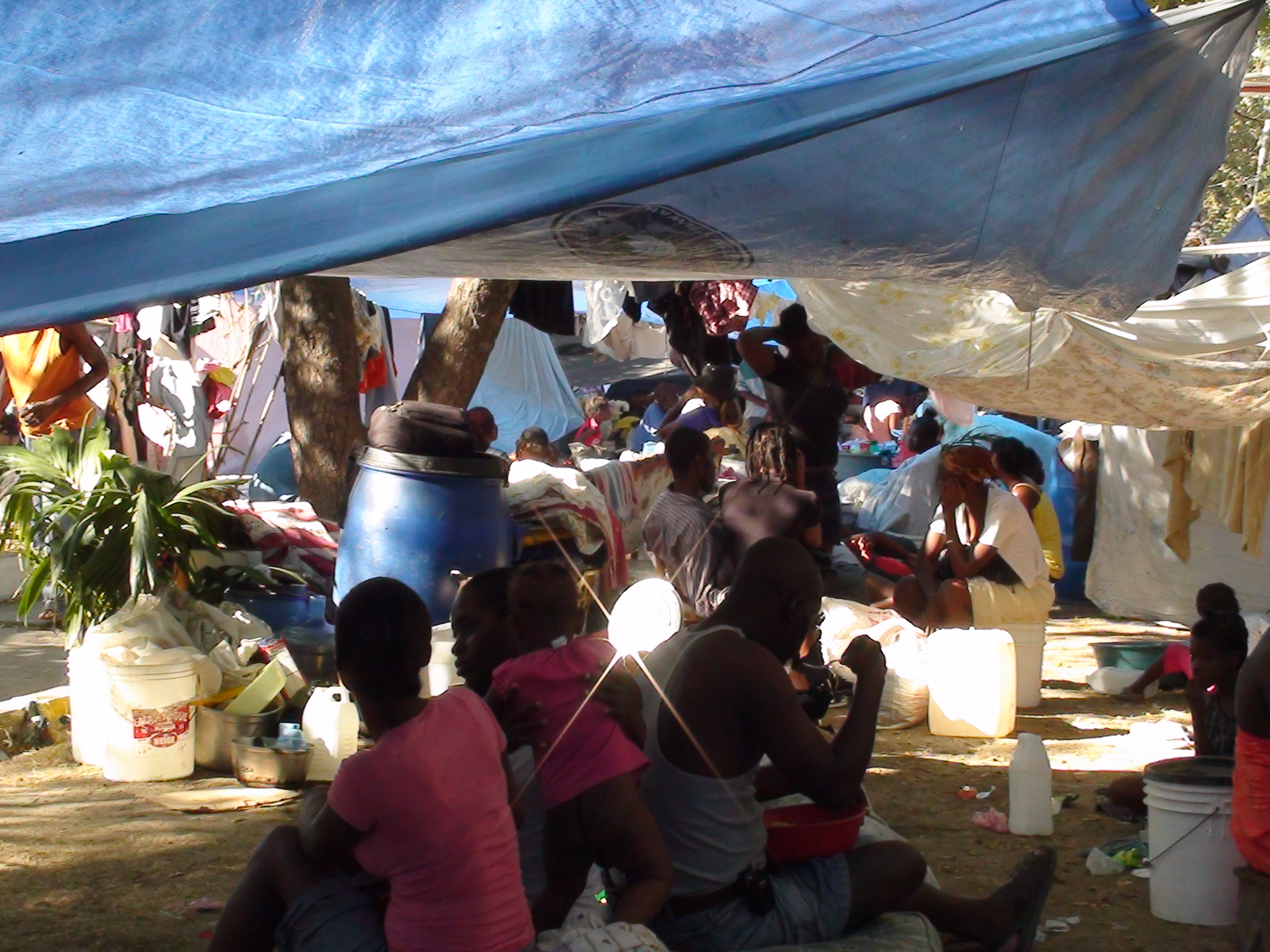 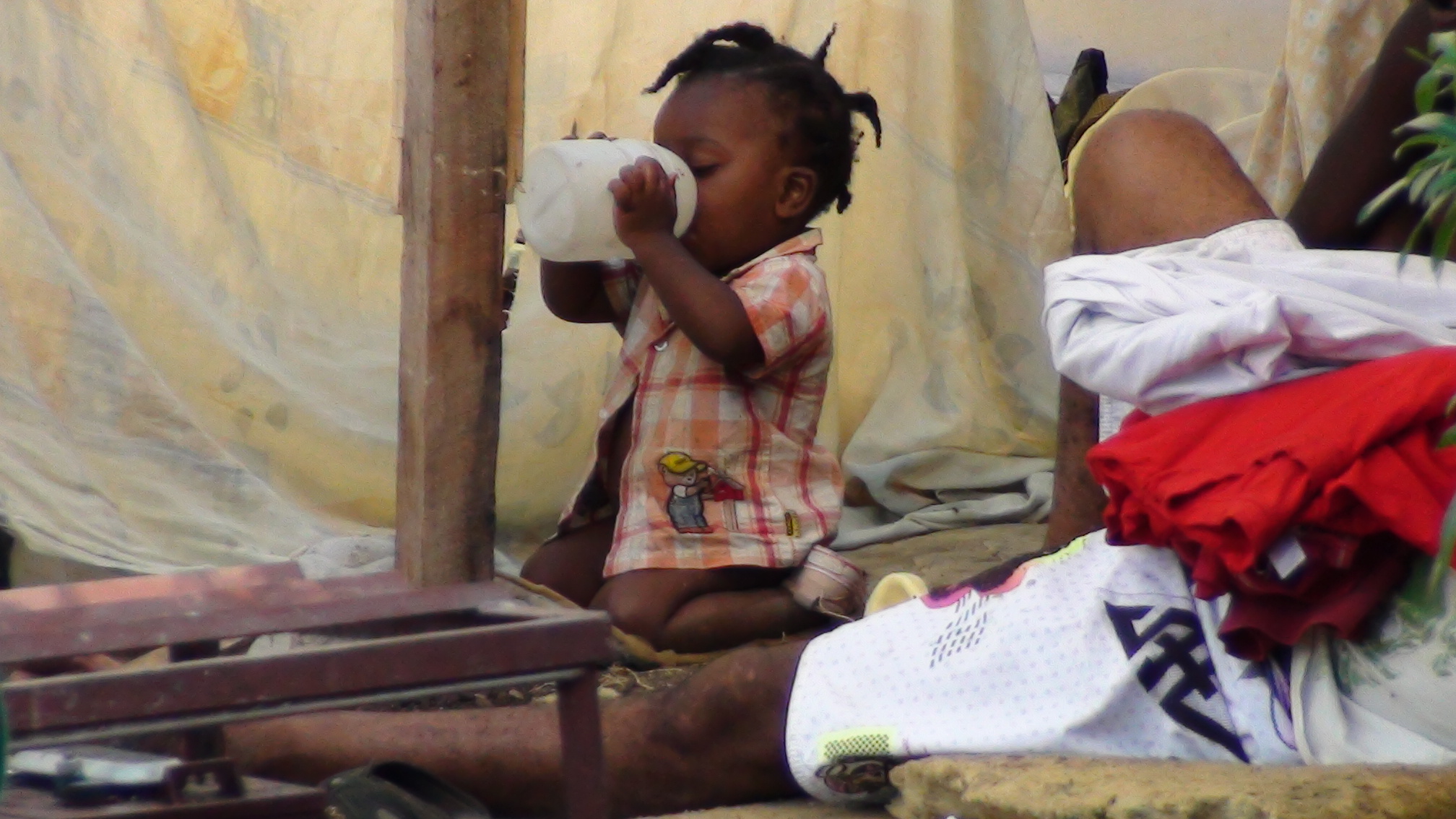 On Friday, January 29, we got an overview of at least 10 refugee camps holding hundreds of thousands of refugees, that seemed to be very much out of the way and not in the spotlight yet. We were led by 3 young Haitian men, one of them who lost his house in the earthquake, was living on one hour of sleep per night and was trying to help the victims of the earthquake as much as he could with the resources he had left. Under his guidance, we bought food to give out, especially to the children, as well as basics such as soap. He was very passionate in his upset wanting us to see thousands of homeless earthquake victims who had not received food and water and supplies to cover their most basic needs. The situation was very similar in all of the camps: hundreds of thousands of persons side by side on cement, protected only by tarps, if at all, infants lying on cement – a sea of humanity none of us had ever seen before to such an extent. Children fought over food in despair. We spoke with community leaders and they told us that they would receive food sporadically, but not consistently so they couldn’t count on it. They were trying to help each other with the little they had left. We had children grab food out of our hands so violently and desperately. It was heartbreaking. 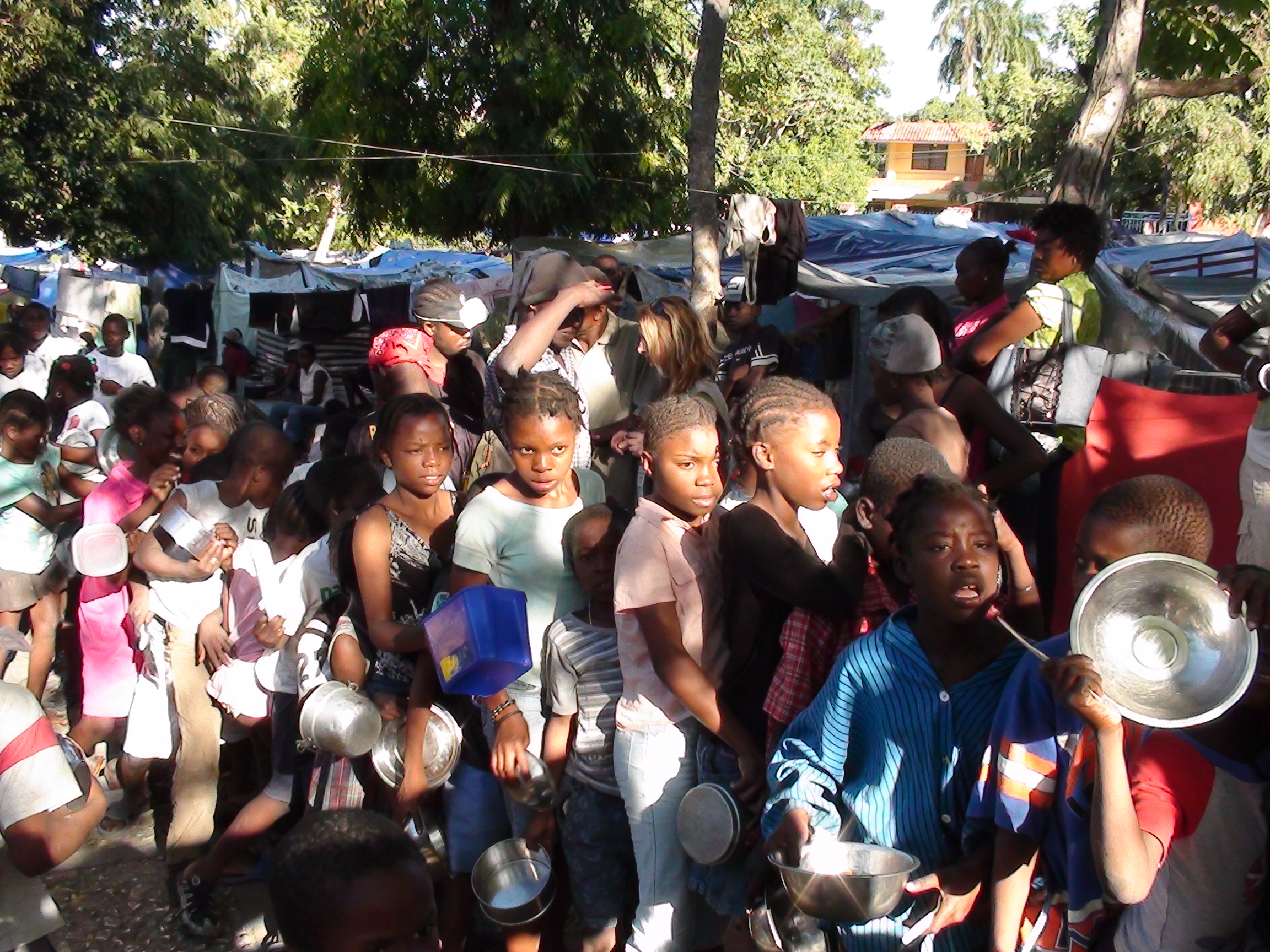 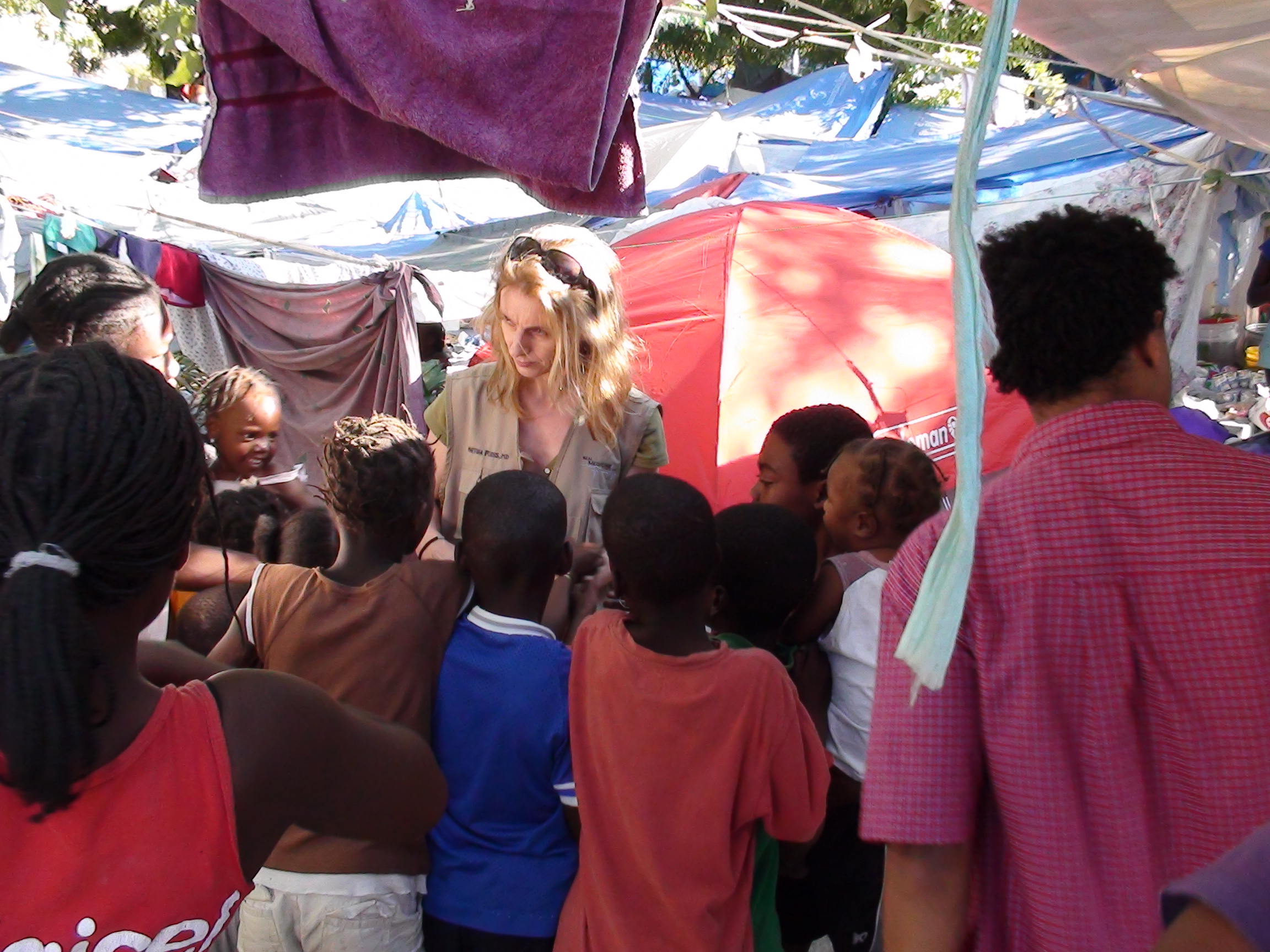 All of these people had lost their houses, or their houses were damaged so badly that it was and still is unsafe to go inside. There are people who tried and they got injured or killed trying to get their possessions, records, and memorabilia. Soccer fields filled with homeless earthquake victims, the garden of the prime minister, filled with refugees, seas of children and adults everywhere.

Right now, it is still hot and dry here in Port-au-Prince, but everyone is scared for the rainy season to begin. One of our Haitian friends said, ”We Haitians don’t dodge bullets, but we try to dodge the rain.” Even without an earthquake, the rain put everyone who had a house on and up the many hills in the precarious situation that a mudslide could take the whole house down. Now, with instable ruins everywhere, it is not safe for anyone to go back into their houses, and many houses that were hit, but not completely destroyed will probably not survive the next rain. So there might be a few more days, maybe a few more weeks left, but the rain will come eventually. Authorities predict that the rains will compound the devastation and cause more, unseen problems including further collapse of buildings, contaminated ground water sources as decomposing bodies and feces are overwhelming the already strained and destroyed sanitation system and infrastructure. 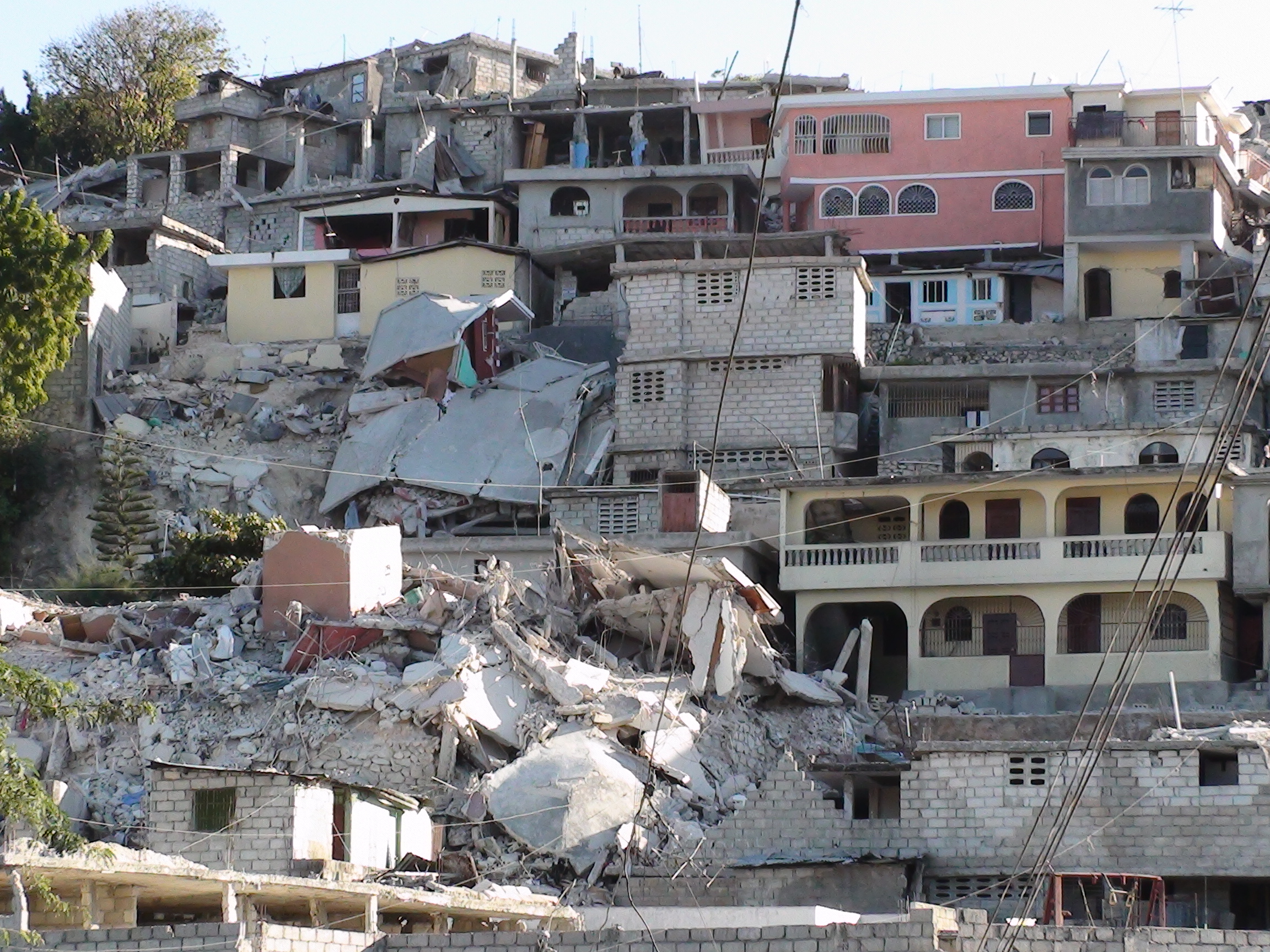 As we drove from refugee camp to refugee camp, night fell and it got dark in Port-au-Prince. Really dark. There is no electricity in the city. The few traffic lights that work are powered by solar power. Everything else is pitch black. What do you do in a refugee camp with hundreds of thousands at night when you have no light? There is no sanitation, no water either.

We did not see any violence or aggression, just despair. People were actually extremely peaceful.

“I’d rather smell tires burning than bodies,” our Haitian driver told us as we traveled down Rue Jean Champs De Mars and Jean Jacques Dessaline, where the density of devastation is overwhelming yet still not as bad as Carrefour Feuille. It was evening and every other block had a fire burning. Interestingly, with the exception of fleets of fire trucks in the area, the streets hummed along with an eerie normality. It was unfathomable to think that everyone we saw would be sleeping in the street in just a few hours but this was the harsh reality throughout the city. No one sleeps inside anymore. 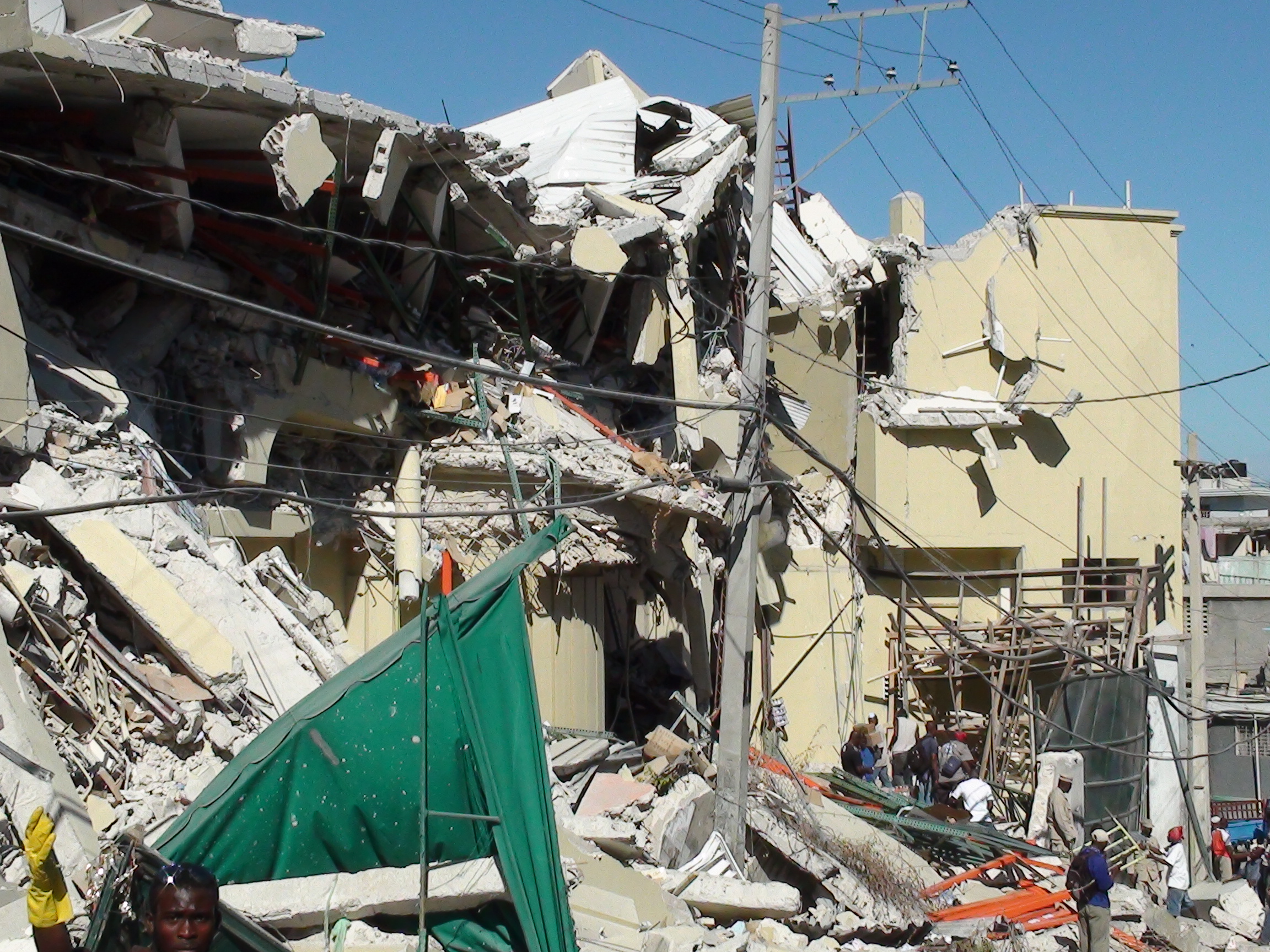 Bodies were still pulled from this building on January 29, 2010 – 4 alone in the morning of that day. A total of 250 persons died in these buildings, a popular Caribbean market.