Sean Penn made a powerful point in his speech to the Senate Foreign Relations Committee on Wednesday in his update on the reconstruction efforts in Haiti. He reported that the international community’s unprecedented support after January 12th has not made its way to the community fast enough, citing excessive caution at the hands of the decision makers in writing the checks. Mr. Penn said that the “bureaucracy of international aid is protecting people to death”, arguing that in trying to avoid the problems of aid to Haiti that have taken place in the past like corruption and aid-dependency, the international community is jeopardizing the current effort to save lives on the ground.

In the critique, he referenced a slew of other problems that have directly arisen through those cautionary delays. Among them, Mr. Penn mentioned the 5 fully-functional hospitals “in this city of ruins” that have had to close since the disaster because they ran out of money and couldn’t meet the sniff-test of donor agencies quick enough. He also discussed the children who have been allowed to die of simple but deadly diseases, including a recent 15-year-old boy with Diphtheria, because of a lack in supply of basic medical treatments.

Mr. Penn’s argument resonated with me because I’ve experienced them directly. We worked to raise emergency funding for our partner, CDTI Hospital, before it was forced to close in March. Our efforts and those of the international community proved to be too little and too late to save the hospital, but for some reason it seems that the reconstruction effort in Haiti is slow to learn its lessons. Organizations continue to draw up plans to fund the construction of new hospitals that will take years to build while more of the remaining facilities—already providing public healthcare each day—continue to run out of funding. Finally, I watched first-hand as the boy that Mr. Penn talked about was turned away from our other partner hospital, Lambert Santé, despite the staff’s best efforts, because they, like all the other facilities Sean’s team visited that day, lacked the available treatment.

The same frustrating lack of coordination that has plagued relief efforts in the initial weeks is still evident in these critical gaps in program funding and medical supplies, vaccinations and treatment distribution—holes that continue to claim lives while the decision makers deliberate the best way to plug them. While there is a strong argument to be made for exercising caution and thinking long-term, the international community should keep in mind that some problems—like ensuring basic healthcare in a city largely destroyed by a natural disaster—don’t wait for a convenient time to be fixed.

In his point on Wednesday, Mr. Penn was dead-on. We can only hope that someone up in Washington was listening.

A transcript of the speech is available here. 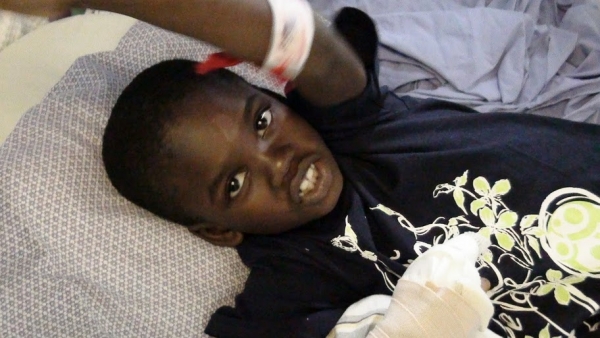