Real Medicine, in partnership with Chadasha Foundation, has been allocating volunteer medical professionals to Sacred Heart Hospital (Hôpital Sacré Coeur) near the heart of the city to help in ongoing treatment and rehabilitation services. One of the biggest challenges in Haiti is rehabilitating the new population of amputees. The first few weeks are critical to getting these patients mobile as much as possible, strengthening what physical resources remain in the process. Oftentimes this process is more mental than it is physical.

Today I had a chance to catch up with a physical therapist working as part of our team Sacred Heart, Mel Hoffman, and learn more about her work at the facility. As the only PT currently working at the hospital, Mel has been in high demand, serving the 60 in-house patient populations by herself, about half of whom need daily rehabilitation sessions. Mel is also working to provide each of them with training regimen overviews, introductions to their new prosthetic equipment and direct counseling.

Mel is very comprehensive in her approach, going out of her way to build relationships with each of the patients she serves. Mel says that building trust is critical to making progress in her physical therapy sessions, and is particularly important with the victims of the earthquake in Haiti. Most of them are suffering from PTSD (Post-Traumatic Stress Disorder), having been trapped under rubble for hours or even days before being found. Having suddenly found themselves living in tents out in the day’s heat, surrounded by strangers and missing a leg, it’s understandable how many could feel uncertain or discouraged.

Mel also tells me that many patients refuse to do therapy until they’ve been assured that the therapist is not leaving. They have been subjected to a constantly-revolving staff of medical professionals, probing, prodding, measuring them each day since the disaster hit. The patients may only know a professional for the few minutes he or she visits with them before passing them off to the next volunteer rotating through. Mel insists on being present at the hospital as much as possible to build rapport with the patients, something that is unheard of at most facilities treating victims. It is also a real world example of RMF’s mission to build sustainability into its clinics, ensuring that patients develop relationships with their providers and receive care and treatment not just during the immediate humanitarian crisis, but on a regular basis well into the future. 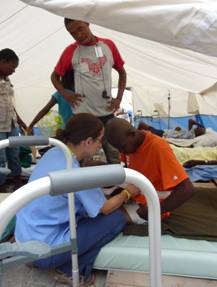 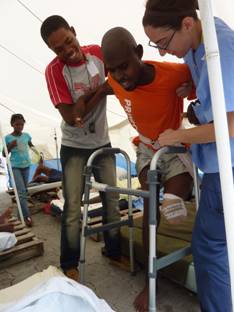 When I caught up with Mel, she was busy prepping a 32 year old man named Jonathon for his session. I had a chance to ask him a few questions about his experience with the earthquake. When it hit, Jonathon had been walking along the sidewalk in the center of town with a friend. As the shaking began, he saw a mass of people frantically running to get out of the 4 story apartment building next to him, falling as they ran from the force of the shakes. Not knowing what to do and unable to move without falling himself, he dove under a parked car just as the building started to collapse. The wall fell on the car he was under, and pinned his leg under a car door, crushing it against the ground. Fortunately, the friend he was with found him and was able to rescue him from the rubble only a few minutes after the earthquake was over. However the damage to Jonathon’s leg had already been done. He was taken to a nearby hospital and took his place in line amongst the countless other patients. A nurse eventually treated his wounds, but according to Jonathon, he laid in bed for 4 days before any doctors realized his leg had been crushed in the disaster. By then when they tried to salvage the leg with external fixation and a tissue graft, the leg wouldn’t respond. They amputated soon thereafter, and Jonathon now lives in a tent in the Sacred Heart Hospital parking lot with 9 other strangers of various states of injury. 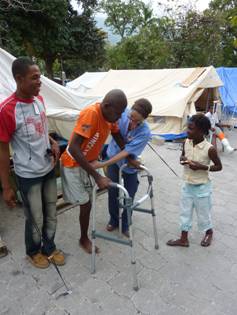 Struggling to bridge his life before the earthquake to his new life in its aftermath, Jonathon has required an extra bit of encouragement to agree to do rehab each day. It is clear that he has not yet come to terms with the loss of members of his family, his house and his leg. Mel is constantly pushing him to focus his thoughts on getting stronger so that he can eventually walk out of the hospital, but the discouragement he feels has been a major hurdle. We’ve learned that prosthetics have a certain taboo in Haitian culture and most patients would rather have nothing at all than to have a false leg. This stigma also extends into receiving help or therapy for their amputation, as they are being seen in open tents and in front of the other patients. The cycle that results (and was the case with Jonathon before Mel saw him) is that many patients are too weak to get better and unwilling to try because they are too weak.

After I heard his story, Mel began her session. She used a mixture of positive reinforcement and tough-love, and eventually got Jonathon to do some simple stretching and flexing exercises. Five minutes later and after some more encouragement, he was standing next to the bed, flexing his weakened quadriceps on his left leg that seems to look more like rubber band stretched across a stick than a muscle strapped over a bone.

By the end of the session, Jonathon seemed empowered by his success at handling the initial exercises. Having sensed an opportunity to push further, Mel reached for his new walker and placed in under his hands. To the surprise of everyone, Jonathon grabbed it and took a step. Seconds later, he took another, and then slowly began walking out of his tent with Mel’s assistance. That day, Jonathon proudly stepped 30 feet down the parking lot and back to the claps and support of the staff nearby. They were the first steps he had taken since the earthquake. 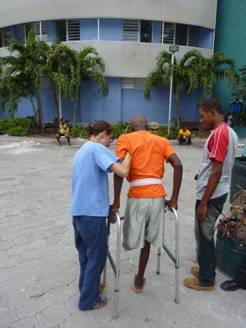