The project goals are to continue to provide health care to those disadvantaged in the Shinuhayr, Khot, Halidzor, Harjis, Tatev, Svarants, Tandzatap, Bardzravan communities. The goal still remains to raise awareness to locals to seek medical help at the initial sight of an illness and to continue routine doctor visits throughout the year. In the month of November, the RMF team also took the time to educate patients who suffer from hypertension, cardiovascular disease and diabetes. The RMF team also wants parents to know the importance of getting their children vaccinated in a timely manner.

In the month of November, RMF communicated with community leaders about starting an emergency department in one of the first aid posts. By doing so, the ambulance service can be used more extensively via the ER department. When the team met up with the Marz province leader, Suren Khachatryan, the RMF projects were discussed. Mr. Khatchatryan was pleased to hear what RMF has already accomplished and was excited with the notion of introducing an ambulance to the post. The RMF team has been promoting the ambulance, hoping for residents to learn and take advantage of its services, which is estimated to cost between $150-200/month, including fuel and maintenance.

As per RMF procedure, once the socially disadvantaged patients and their illnesses are identified, they come into the clinic for treatment. They get examined by a physician, receive free medicine and are invited to consistent follow-up visits to assure continuum of care. They also get information about our healthcare project so they can spread the word and more of the residents in the region will be educated on the free services provided by RMF. Per community feedback, many people who live far from the more modern cities of Armenia tend to feel that they have been neglected or forgotten about. The RMF project has been a relief for those with such a mindset, knowing that their needs are being taken into consideration and that help is available.

To further understand the healthcare needs of the region, our team investigated the number of registered patients suffering from chronic illnesses in the area. It is important to stress that the statistics below is only extracted from “registered” individuals and the numbers do not reflect those who are not registered. Per those data, the most common health problems in the region are high blood pressure, cardiovascular disease and diabetes. 227 patients are registered with high blood pressure, 92 with cardiovascular disease and 27 with diabetes. In the coming year, RMF plans to promote community awareness, education and screening to help identify members of the community suffering from the above mentioned chronic conditions who have not yet seeked medical intervention.

On November 15, the “Open Door Day” event took place in Shinuhayr which was organized by the Ministry of Health. This event is held twice a year. A group of doctors visit clinics within the region to perform a general check up on the population with the majority being school children. The goal of this event is to promote wellness and to prevent disease. On “Open Door Day” the influx of patients increased. About 75 patients visited the health post, the majority of them being adolescent girls from ages 13 to 16.

Patients visiting the Clinic in November 2010

Children who received vaccinations in November 2010

Many of the villagers are also reported for having dental issues. Most cannot afford to travel to other cities to get dental work done, therefore many leave teeth untreated. Some even take drastic measures when situations get too painful by pulling out their teeth without safety measures. When our team visited the Syunik Marz, they met up with the head of the Marz to discuss project goals. The idea of purchasing a dentist chair and creating a dental room in one of the posts has been a topic of interest by many.

In November, 68 beneficiaries received free medicines and treatments provided by RMF.
Of the total number of beneficiaries, 35% were male, 50% female and 15% children. A total of 118 medicines were distributed to these beneficiaries with 14% antibiotics, 39% for heart health, 19% anti-inflammatory drugs/pyretics, 6% syringes, 5.1% vitamin supplements, 4.2% anti-psychotics/anti-anxiety medicines; 2.5% respiratory medications and 10% other. In addition, a total of 148 children were vaccinated.

Case Stories:
From the Svarants village we have Javahir Gevorgyan who is 83 years old and suffers from high blood pressure. He took advantage of the Real Medicine Foundation project and has been receiving medication on a daily basis. He already reported that his wellbeing has improved and is very thankful that Real Medicine Foundation cares about him and his community.

Asya Margaryan born in 1935, lives in the Shinuhayr village. She was brought to the clinic because of her extremely high blood pressure. Due to her critical condition, she received intravenous care immediately. After her urgent treatment, the physician prescribed her medication. She was very touched with the services she received. With tears in her eyes, she stated that not only did we save her life but we continued her care by offering her free medication. She is very grateful.

Anushik Israyelyan, an orphan and a mother of three, called the RMF team for help. Her child felt sick and Anushik did not know what was wrong. She told the RMF team she wanted her daughter to be seen by a physician but did not have any money for the medical service. The RMF team insisted Anushik bring her child in to be checked. Anushik’s little girl was diagnosed with respiratory organ inflammation due to an infected and deviated nasal septum. Medication was given to the child to help her with the inflammation, but the doctor also recommended an x-ray. During the visit, Anushik herself appeared unhealthy and the RMF team suggested for her to be checked out as well. Thankfully, Anushik was fine. However, after she left the health post, she called the RMF team to explain how awful she had felt when taking her child in to the clinic knowing that she was incapable to pay for her medical needs. She thanked the RMF team for their support and the free care they gave to her and her child. 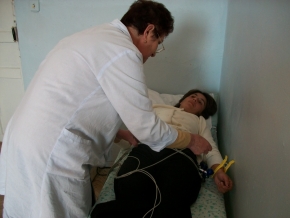 A very content patient is Ararat Simonyan. He was born in 1932 and suffers from high blood pressure and glaucoma. Ararat was one of those individuals who was initially very doubtful about the RMF projects and was not sure of how well it was going to work out. However, Mr. Simonyan received care and medication from the project and now has complete faith in RMF’s efforts. He has learned about seeking help on a routine basis, which is why he visits the clinic monthly: He comes in to get the medications that are prescribed to him and always leaves feeling great and happy. 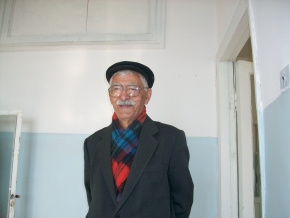 The story of Siranush Galstyan is bitter sweet. Siranush lives with her young grandchildren, son and daughter in law. Siranush is anemic and has goiter. She did not have the financial means to get care and medication for her illnesses, but after hearing about RMF she reached out for help. Siranush has been feeling much better ever since receiving medical treatment from RMF. However, her 7 month old grandchild Harutik has been reported to be suffering from anemia and was born with a central nervous system disorder. Even though little Harutik is under care, his illness is critical and his condition is getting worse. RMF continues to strive to help people like Harutik, whose health depends on crucial medical intervention they would otherwise not be able to afford.

Siranush Galstyan and her grandchild Harutik