Looking back at our Christmas 2010 Fundraising Project

Real Medicine Foundation Team Armenia’s Director Nairy Ghazourian and Project Coordinator Intern Arax Eleyjian decided to end the year with a high note. From the previous year RMF-Armenia had a very successful online fundraiser, therefore another one was quickly planned on www.playtogive.com. The goal was to raise $5,000 by midnight on December 31st, 2010. The money to be raised was going to feed the 159 indigent families in the village of Shinuhayr. Both team members quickly started to email family, friends, coworkers, etc. to pass the word along and raise money before entering the New Year.

Due to the amazing donors, RMF- Armenia is proud to announce that the goal of raising $5,000 was well over reached. Once the fundraiser came to an end, our team on the ground prepared the food supplies that were to be distributed. The food items were the following; flower, oil, macaroni, rice and vermicelli. The team members examined how many families the food was going to, studied how many members per household, and then divided the appropriate portion amounts to be given.

The table below shows the number of family members in Shinuhayr, and the amount of food that was purchased and divided among these families.

Using the RMF ambulance, team members traveled from one home to the other to give out bags filled with food. A local news cast also heard what was going on in this village and traveled to come document this event and broadcast it on their local channel. Many of the locals were very surprised by this holiday gift that was never expected.

Here are some stories that took place during the food distribution:

The family of Sargsyan heard about the food distribution plans and sent over their son to give out a hand to help RMF team members. This young boy volunteered to help unload foods from the ambulance and helped sort out bags that were going to be distributed. At the end of the day, the boy asked if his family was receiving the supply as well. The boy asked kindly if he were to take it home with him that night. He explained if they had flour, they would be able to use it to bake some bread. The team gave him their portion and noticed how the boy took his portion and happily skipped home. He was very jubilant and proud that he had earned it with his work and could help out his family and his community. 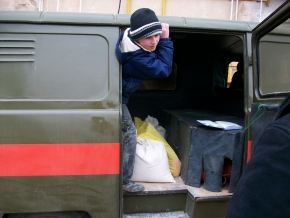 Another young boy named Hayk was on his way home and happened to notice a vehicle filled with food being unloaded. Once he observed to what was going on, he quickly rushed home calling out to his grandmother to let her know that there were people outside giving out bags of food. The RMF team had noticed the excitement on Hayk’s face. He was very curious to find out what was going on and how he could benefit from this gift. Hayk and his grandmother came back outside to study what was happening; meanwhile the RMF team was approaching them with their share of Christmas goods. The team knew Hayk’s grandmother, Mrs. Stepanyan, who is a diabetic and receives her monthly medications through Real Medicine Foundation. Both of them were very grateful and their faces were filled with happiness. 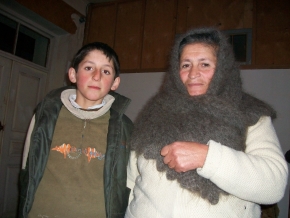 Photograph of Hayk and His Grandmother

Mr. Armik Harutunyan was sick in bed when the RMF team visited. He had a sense of relief and he could not have thanked everyone involved enough. Others like Ms. Nina Mirzoyan, who was very delighted and appreciative that she wanted to photograph with the RMF team members.

When team members visited the Stepanyan residents, only their son was at home. He was in complete shock to what was going on, his eyes could not believe the gift that was brought to him. He insisted to call his mother first to ask her of what he should do. A few minutes later the mother arrived to accept this generous gift. They were both very thankful. Even after Mrs. Stepanyan explained to his son to what was going on, his eyes were still in disbelief and filled with astonishment and joy.

The family of the Matevosyans had said their children had missed getting presents from Santa Clause. They were all very grateful that there were people out there who care about their wellbeing and appreciated this blessing.

Stories like these prolong; many of the families had recognized the RMF staff right away saying such things as, “the people who provide us medicine”. The villagers were ecstatic and wanted to thank each and every one who had a part in this contribution. There was a sight of relief for these villagers. Not having to worry about food during a season of feasts and celebrations. The happy faces on many children were so sincere, making the RMF team feel as if they were Santa Clause bringing them gifts. Parents were delighted that they would be able make food for their children without having to worry about counting how much money they had left. The elderly felt valued, that there were people out there who cared for them.

RMF Team Armenia wants to thank ALL the donors. It was your generous donations that assisted us with the accomplishment of feeding the families of Shinuhayr. It was because of you that we were able to bring Christmas joy to these homes and we thank you for it. Having your support pushes us to reach higher goals and we are thankful for having such sponsors like you.