Throughout the past four months (July through October) Real Medicine Foundation continued the distribution of medicines to vulnerable and socially disadvantaged individuals and on October 16th, 2010 purchased the long-awaited ambulance to service our project population. This was made possible with the generous donations from our June 12th, 2009 event “A Journey to Armenia” and the Playtogive online charity event that was implemented in December of 2009. Thank you for all those who participated and contributed!

Below are photographs of the ambulance RMF made possible to purchase with the help of the ARS team.

One of the main reasons to why RMF purchased an ambulance was the lack of access to transportation. Many of the locals usually do not seek treatment until their illness develops to its last phases or worsens to a great level. In addition to health education, RMF’s goal is to offer transportation availability, so that civilians would seek treatment at the initial sight of an illness, and raise a consciousness for routine doctor visits especially for those with chronic illnesses.

Throughout the months of July through October, a total of 107 socially disadvantaged patients in need of treatment and care received the appropriate medicines to help in the management of their disease states. Of those receiving meds, 56% were female and 46% male. The median age in July was 60; 60 in August, 62 in September and 41 in October.

The total number of pharmaceutical drugs distributed to the 107 patients in great need of assistance was 223. As the chart below demonstrates, there were fewer medicines given out in the summer months and the numbers significantly increased in September and doubled in October as we entered the fall season. Naturally, there seems to be a correlation between colder weather/season and increased distribution of medicines.

The major drug categories were in the areas of Heart health, Anti-inflammatories/anti-pyretics; Psychotropics/anti-depressants; Antibiotics; Anti-histamines; Respiratory and other. The “other” category includes drugs such as antacids, supplements, topical antiseptics, laxatives, eye drops, syringes etc.

The most prevalent category of disease needing pharmaceutical intervention is heart health which includes anti-hypertensives, heart pressers, diabetic drugs and anti-coagulants. In 2002, the World Health Organization (WHO) reports Ischemic Heart Disease to be the top leading cause of death in Armenia across all age groups. Similarly, the most common illnesses the people of this region suffer from are cardiovascular disease and diabetes. It has been observed that many of the people living in this region are also heavy cigarette smokers and alcohol drinkers. These unhealthy behaviors are major health risk factors that villagers should be more educated on. In the coming year, RMF plans to focus on “health education” as one of its target objectives.

The overall percentage of medicines distributed in the Heart Health category from July through October was 43%; 23% in Anti-inflammatory/anti-pyretics; 8% in Psychotropics/anti-depressants; 7% antibiotics and 6% Anti-histamines.

During these months, our team also visited several of the villages and met with community members, village administrators and local nurses in order to hear the voice of the local residents, assess their needs, listen to their stories and provide assistance.

In the village of Svarants we met with the local nurse, Astghik Grigoryan and with the village administrator, Arthur Margaryan. We discussed the intentions of what the future holds for Svarants. The village administrator shared that sadly, this region soon will be deserted because many of the young generations after finishing their secondary education will eventually move to the capital of Armenia, Yerevan to find work.

The total population in Svarants is 332 of which 17 are children between the ages of 0-7 and 47 are adolecents/young adults between the ages of 8-17. The village has 4 disabled individuals, 5 single mothers and 48 socially vulnerable/disadvantaged families.

Mr. Margaryan mentioned the water situation, which is a significant reason to why many would consider relocating. The water source has been very scarce and purifying water has been hard for this village to receive. Two years ago its residents were all infected with dysentery. Dysentery is a “disorder of the intestine, especially of the colon, that results in severe diarrhea containing mucus and/or blood in the feces with fever and abdominal pain”. This illness develops from “bacterial or protozoan infection or infestation of parasitic worms, but can also be caused by a chemical irritant or viral infection” (http://en.wikipedia.org/wiki/Dysentery). Those who have the means to move their lives to another city will eventually leave, however; those who are disadvantaged will not have the privilege of relocating. The village’s health post (which only employs a nurse) has been somewhat repaired by the efforts of villagers, but they do not have any pharmaceuticals or medical equipment on hand. Our team provided the post with 312 units of first aid medications ranging from antibiotics to analgesics, antipyretics and heart health medicines. The nurse requested a few “must have” equipments which the health post lacks at this time such as: sterile table, sterilizers, refrigerator for maintaining medicine, glucometer, blood pressure monitor, scissors and electric stove to heat the post during winter. RMF will further look into allocating some funds to provide the necessary items to the post in Svarants. 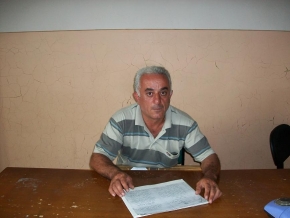 After sharing some ideas with Mr. Margaryan and local nurse Astghik Grigoryan, our team visited several families in Svarants. One of the families we met with are the Hayrapetyans. Vachagan and his wife Heriknaz have four children, born in 1992, 1994, 1995 and 2007. Mr. Hayrapetyan and his four children suffer from bronchial asthma and Mrs. Hayrapetyan is diagnosed with severe anemia. The couple is not able to work to provide for their family and live in horrendous conditions. Real Medicine Foundation assisted this family with the necessary medicines to help care for their chronic conditions.

Below are some photographs of the Hayrapetyan family from Svarants village

The next location our team visited is the village of Khot. Unlike the village of Svarants, this village is in rather good state, but also has the common water source issues. Mrs. Lusik the village nurse lives in horrible conditions herself. Her home burnt down about two years ago, but she remains there helping her fellow neighbors and villagers with their medical care.

While in Khot, our team met Margusha Arustamyan’s family. Margusha was born in 1939 and suffers from hypertension and was recently diagnosed with botulism. Her illness has caused Margusha to be bed bound (shown in the picture below). Her household includes her grandchildren, her son and daughter in law. They live in a dilapidated building with broken windows and no insulation. During the winter season their living condition becomes more of a challenge. They have a small fireplace which is their main source of heating the building. One of the children’s’ chores is to collect sticks to burn in the fireplace. Margusha lost two of her grandchildren in the past at the ages of six and five months. The first grandchild had a heart condition and needed multiple operations. Since the family could not afford the operations, the child passed away from heart failure at the age of six months. The second grandchild passed away from an intestinal illness. The child was not able to receive proper care and eventually did not survive. The grandchildren who currently live with Margusha also have health issues. Her 8-year old grandson hurt his eye while playing and suffers from an eye wound as well as psychological issues. The granddaughter is handicapped and cannot ambulate normally. The father occasionally takes over some tasks around the village in order to support his family. It is estimated that he usually earns around 1000 Drams per day, which is about $3 dollars. The money he makes is used for food and school tuition for his two children. On behalf of Real Medicine Foundation, donations of clothing are also being made to this family.

Below are photographs of Margusha Arustamyan and her two grandchildren

Astghik Grigoryan is 33 years old. She is a nurse and is also disabled. She has survived a stroke but now is handicapped and cannot ambulate. She has three small children. Her mother is her main caregiver and also helps take care of her children and the general housekeeping. Astghik’s husband was the sole breadwinner in the family, however he is currently unemployed. Astghik suffers from severe pain and headaches. Real Medicine Foundation has been assisting astghik with her monthly medications. She recently thanked RMF and reported that her pain has become more tolerable.

Gohar Musayelyan is a resident of Shinuhayr. She used to be a teacher but no longer works due to her disabilities. She lives with her husband, son, daughter in law and two of her grandsons. Her son is the sole breadwinner in the family. They are very poor and Real Medicine Foundation came through to help Gohar with her medications. 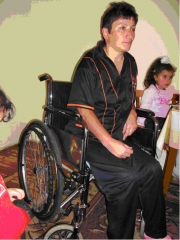 Artavazd Vardanyan is another underprivileged resident from Shinuhayr. Few years back he had an accident and fell down a tree and has been handicapped ever since. He has three children, two of them who are minors and the eldest serves in the military. Real Medicine Foundation has been assisting Mr. Vardanyan with his monthly medications (anti-hypertensive, anti-inflammatory and antacids).

In the month of October the goal at the Shinuhayr Clinic was to raise awareness about preventative health and give locals the opportunity to visit doctors more often, encourage women over the age of forty to receive physicals at least twice a year, and finally, observe out-patients’ well being and their living conditions within the community.

The most common illnesses the people of this region have are cardiovascular disease and diabetes. As mentioned earlier, it has been observed that many of the people living in this region are also heavy cigarette smokers and alcohol drinkers. Many are also involved in jobs that demand severe physical labor and injuries are quite common in these types of work.

Those who are socially vulnerable are prone to having the poorest health. Due to lack of health education people are unaware of what might cause harm to their wellbeing. Poor labor conditions increases their risk for illness and the lack of financial means to visit doctors when needed, eventually causes more advanced and complicated health issues.

Many were skeptical about the Real Medicine projects at first. They doubted the possibility of having access to free care and pharmaceutical drugs. However, one by one people are starting to realize and appreciate the helping hand of RMF and they are learning to ask for care when needed.