Beatrice has experienced hectic moments and tough times in the last few months since her house got burnt and her sewing machine got destroyed in the fire. This affected her so much that she could not do her daily work as she used to do. Beatrice being hard working, she has not given up because of what happened to her. She had made good savings and so she went to farming by growing maize so that she would be able to generate income to sustain her family and herself. At the moment Beatrice waits to harvest her maize so that she can repair the second machine she owns and also buy the necessary materials to start her business again. 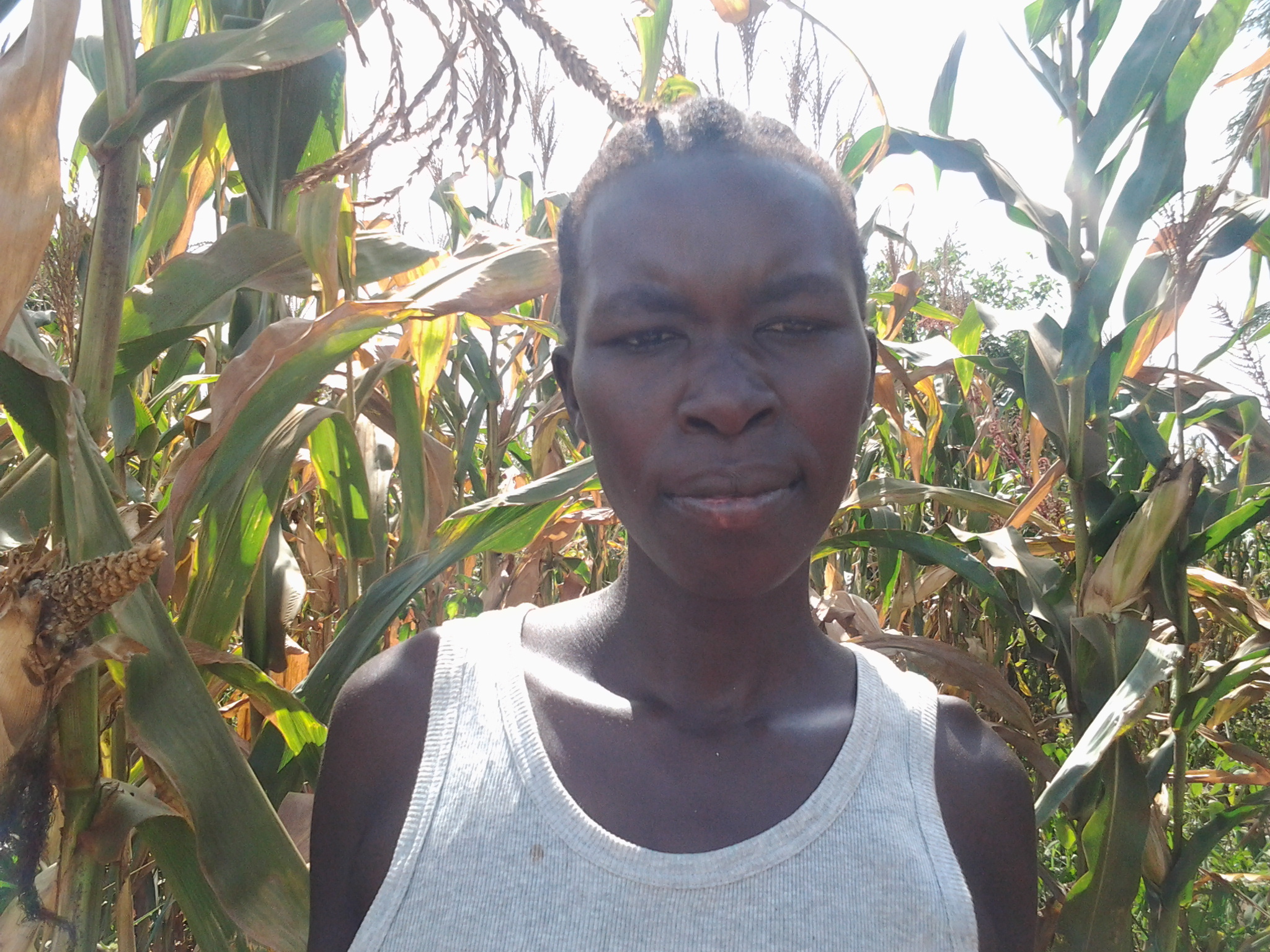 Beatrice standing in her maize plantation

Lillian is one of our most successful tailors. Lillian is now competing in the Settlement for the women achiever awards. She has shown many people her successes, from her humble beginnings with the machines we gave her to how she grew to where she is now. From where she began, she continued to also develop into agriculture as now she has half an acre of cabbage  ready for harvesting.

Achievements:
Lillian managed to plant half an acre of cabbage which she expects to harvest any time now and she is among a few women who are growing vegetables in the Settlement which have a ready market. She is waiting for the time of harvest her 2 acres of maize, 2 acres of cassava, and she hopes that the income that is generated from her harvest will help her complete her house. She thinks of expanding her tailoring business to her new house when it is complete so that she can work at her home.

Challenges:
Like any other business, Lillian says that capital remains a big issue as the materials are expensive as the currency is being weaker against the dollar making it hard for her to buy enough materials to do good business.
Since she works at home, it is more difficult to get customers. Getting a market for her products also is hard as she has to move out of the Settlement to the nearest trading centre, Bweyale, to sell her products. 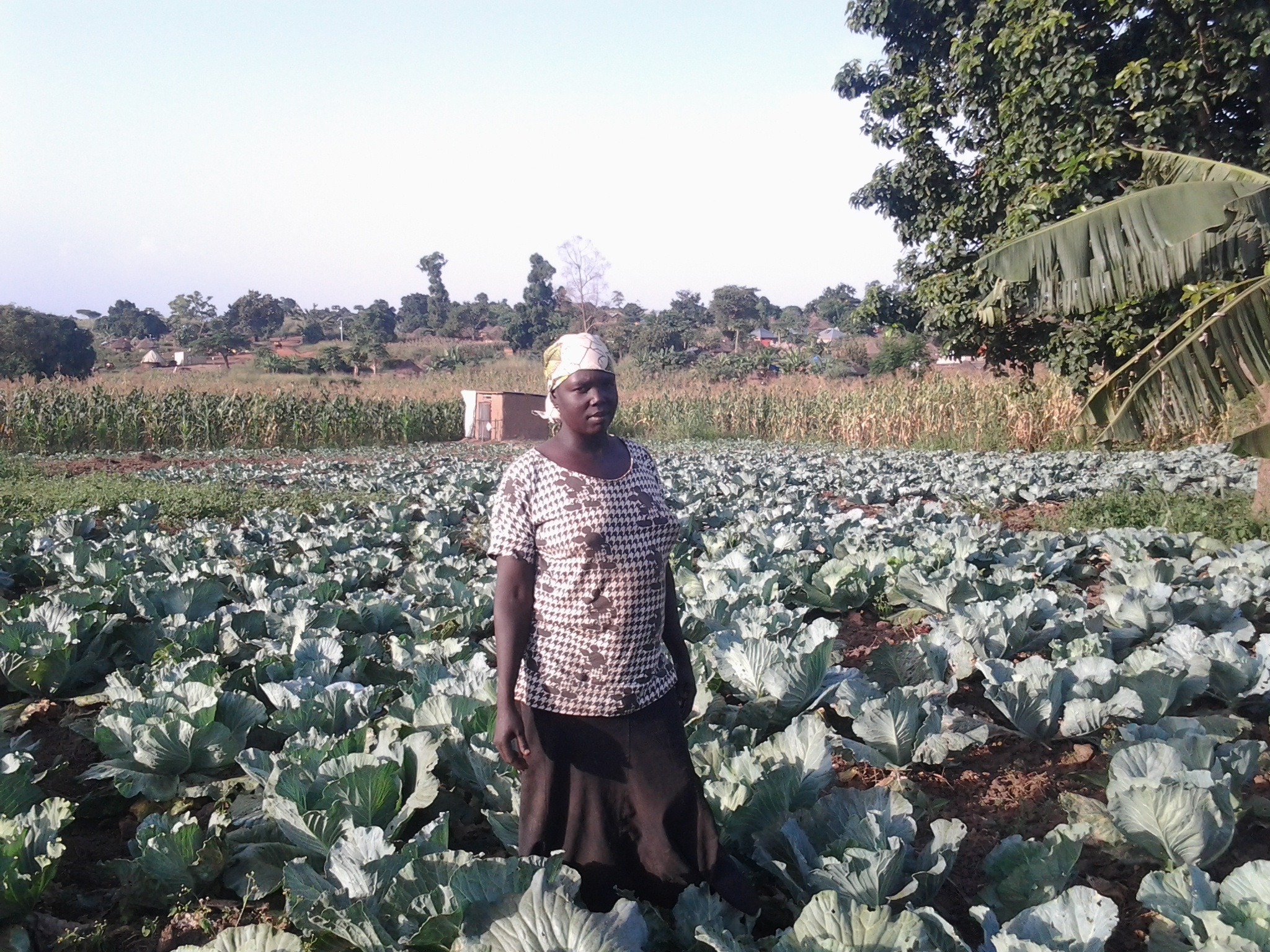 Lillian in her vegetable garden in the settlement 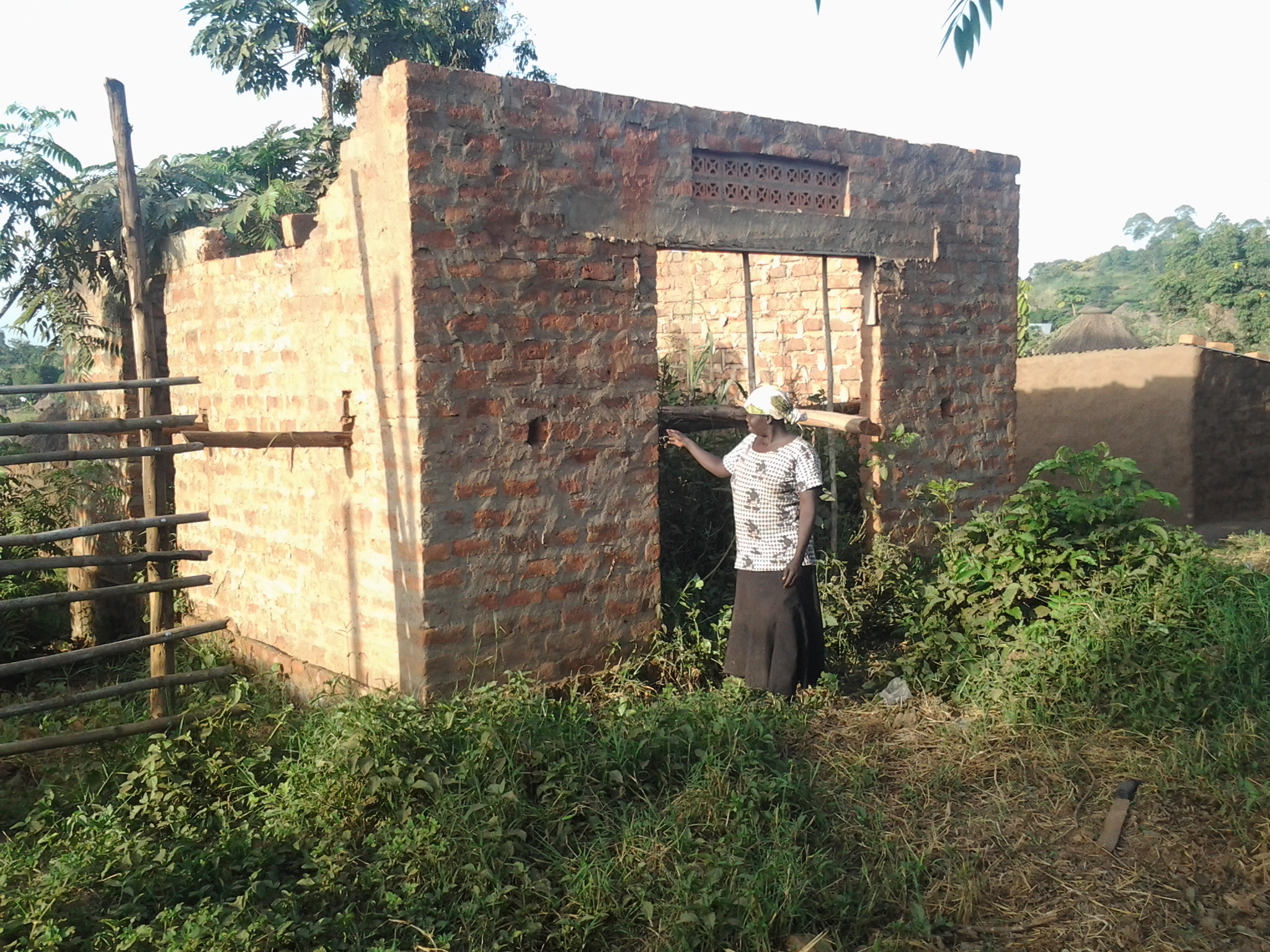 Jackline has continued to work from her home. She is able to work on many people in her cluster.  As she sits on her stool, Jackline embraces her work as a tailor as she has created her own office and store at home.

As she does her work at home, Jackline says that she has been able to save money from her business and rent one acre of land. On that land, she has planted maize which is awaiting harvesting, and this money helps her to fill certain financial gaps. As a young hard working lady, when asked about the challenges that come while working, she says it’s hard because you have a static customer base, so the increase of customers who can access your services is low because you are at home and those who know you are the members of your cluster. The other issue she raised was the weather being unfavorable on some days because she works under a tree and when it rains, it affects her business. 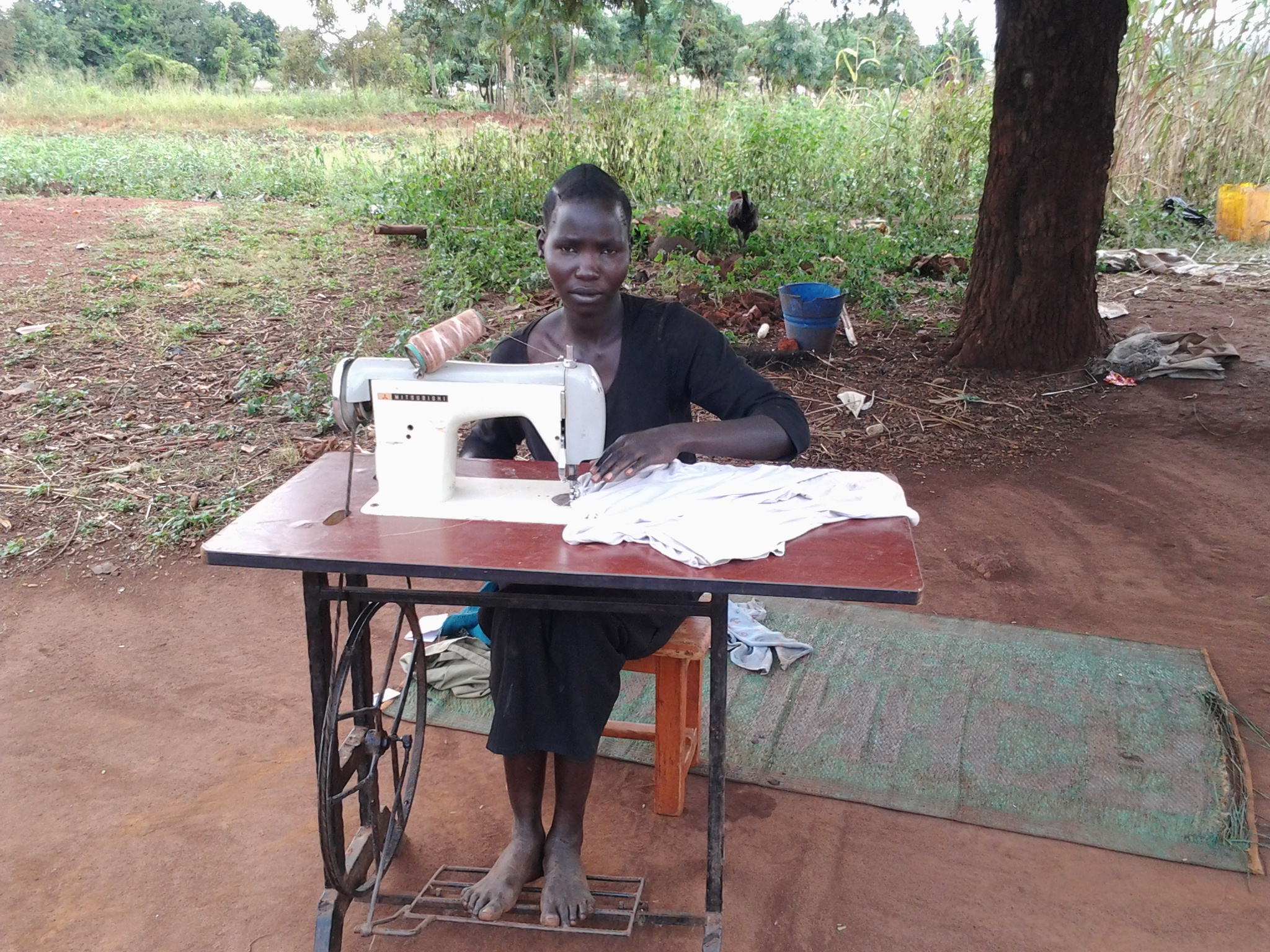 Jackline at her home working on her customers' clothes

Working from her home, Angella has progressed well in terms of skills development and also in terms of expanding her business. She received a loan from one of the existing SACCOS in the Settlement where she got some money to help her purchase more materials, and then she paid someone who taught her how to make table clothes.

Within a short period of gaining such skills, Angella has managed to make profits of UGX 7,000-8,000 per day. This has energized her since she can now afford to provide for herself.

Having been challenged so much in the business by many factors such as location, enough capital to expand her business, she has not given up on doing what she graduated in. Angella says that working from home does come with a lot of issues, the people who may know the location of your business are few, exposing your products to the market is hard and also looking for clients becomes harder. 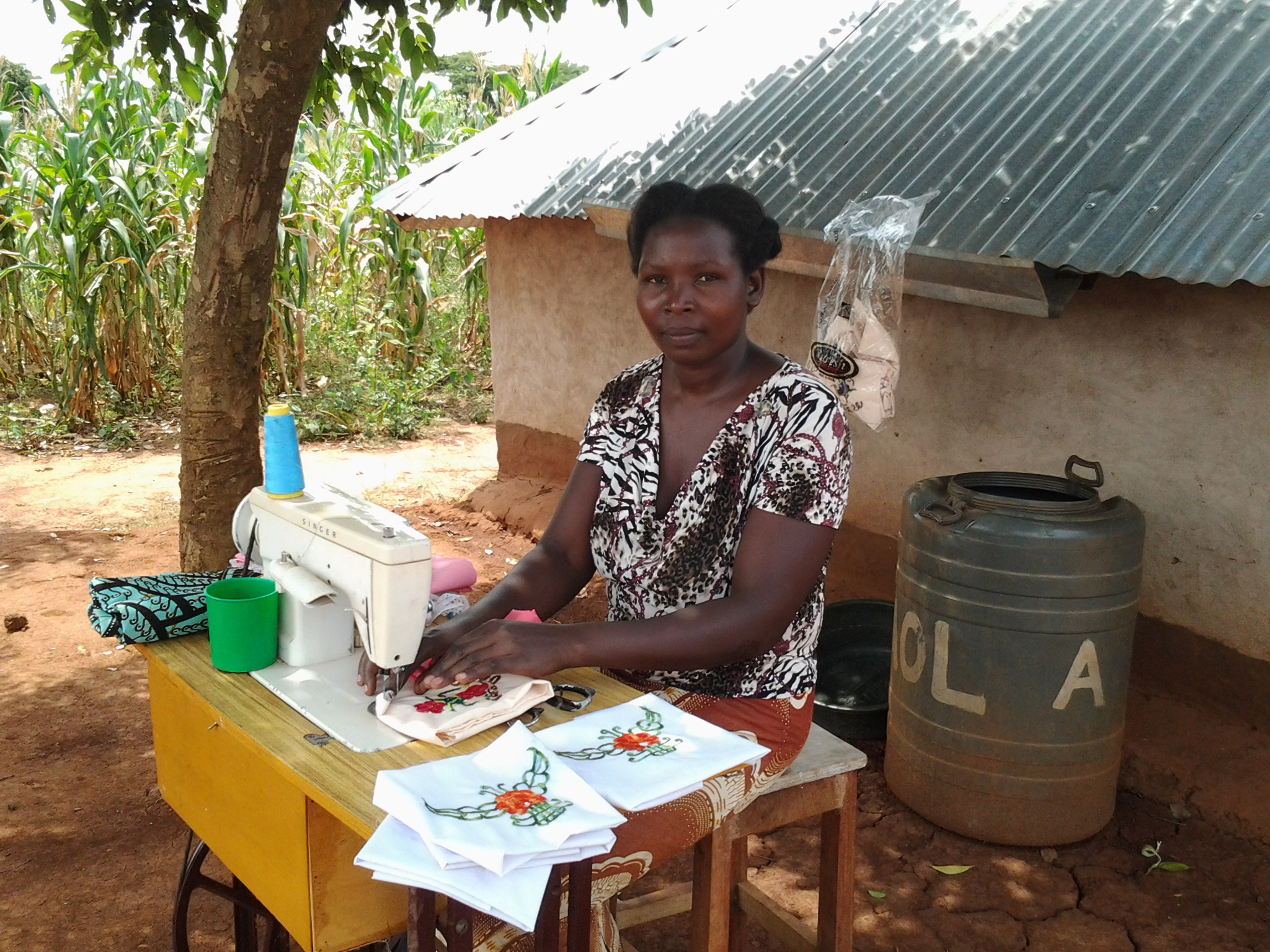 Angella at her home working on her client's table clothes

The smile you see when you meet Poline gives you confidence that she is progressing. Poline enjoys her work as becomes obvious by the gestures she shows when talking about her work. She increased on her stock of materials that she uses to make closes.  She has been moving on well though business challenges which are a common phenomenon since the economy is unpredictable, and the prices of the materials she needs differ all the time.

But Poline feels that business is about trying the impossible to make the possible happen. Poline attributes her success to the knowledge and skills that she gained at RMF’s Panyadoli Vocational Training Institute. 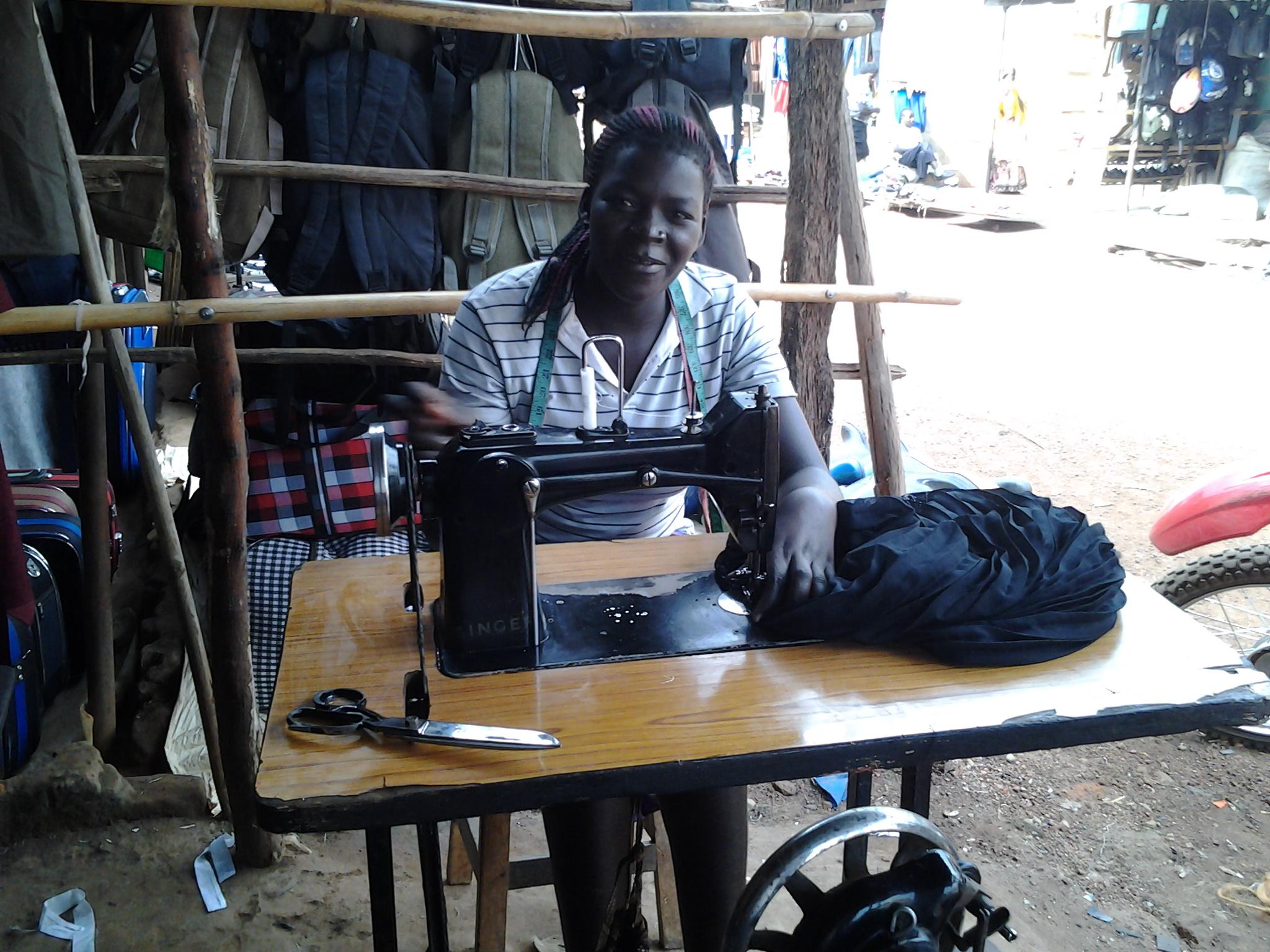 Auma Santa is one of our extraordinary tailors who we gave the funds and materials to start her business, and she opened her own shop. A mother and a refugee in Kiryandongo, Auma Santa has beaten the odds to be where she is now. She managed to expand her business now having students and employees learning from her.

Auma Santa bought a fithe sewing machine, an addition to the four machines she already had whereby the fifth machine is for those who come to her to learn. She has more and different materials in her stock due to her creative teaching which requires special materials, and so she has been able to add onto her stock to cater for very specific demands and also to increase her production significantly.

She says that she is gaining more knowledge every day while working, and attributes this to the trainings she received by RMF in tailoring and also in business skills which now makes it easy for her to expand so much in the development of her skills.

Auma Santa is still selling her table clothes and bed sheets at the border to South Sudan, being innovative in her business, Santa has benefited significantly from sending her products to South Sudan and also to the other areas neighbouring Kiryandongo.
Auma Santa is a single mother, with her work she has managed to pay school fees for her children, to feed them and best of all to provide them with everything they require.

Like in any other business, Auma Santa says that she also experiences challenges: The prices of materials are increasing due to the inflation. She also saw raises in her monthly rent. 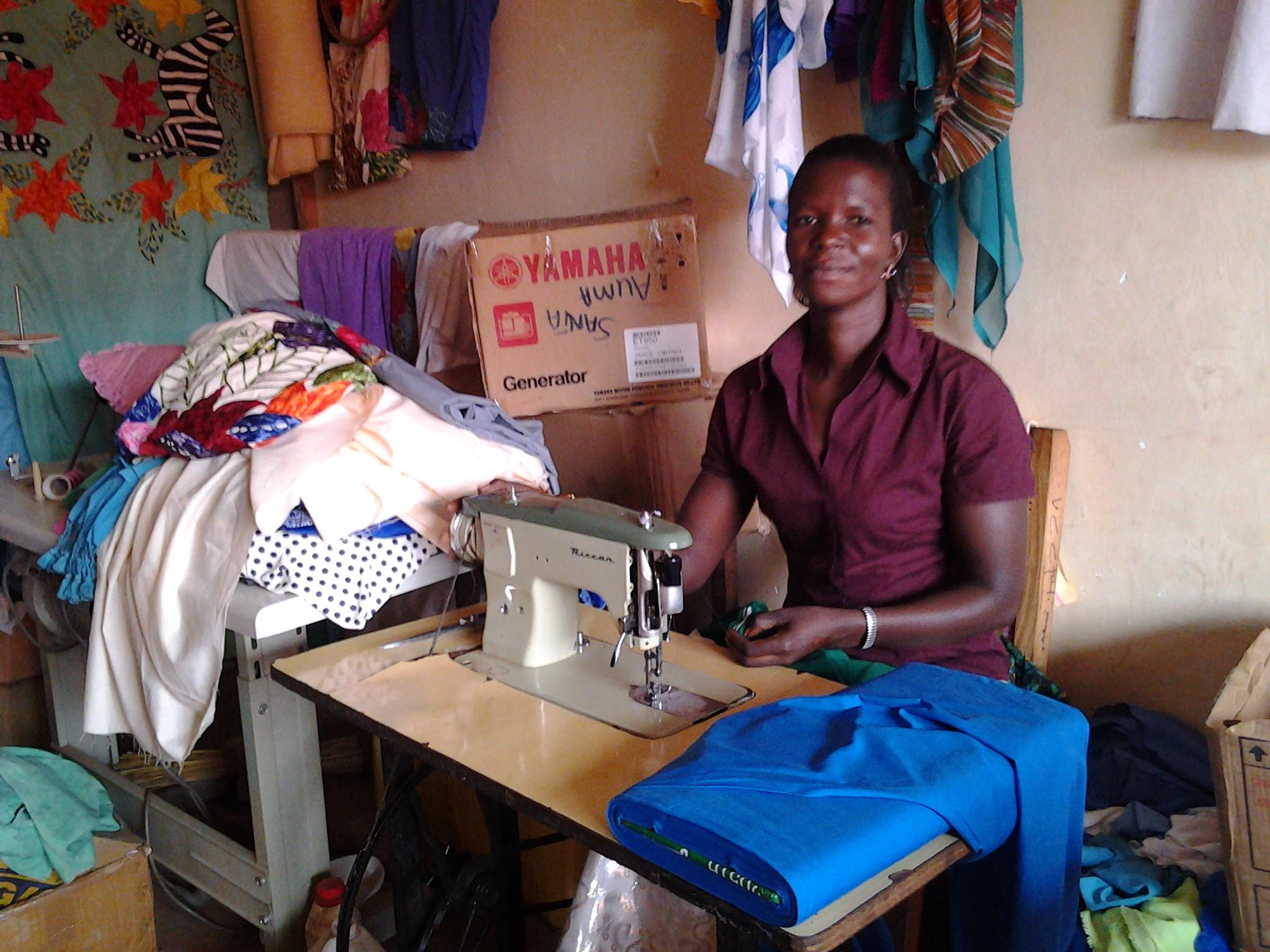 Auma Santa's new machine that she bought with her savings

Caroline Aweko is one of the tailors who graduated from Panyadoli Vocational Training Institute. After her graduation she started looking to get a salon to work in. She is now in Bweyale centre employed in a salon. Caroline is one of the few young women in her age group who have acquired skills that can change their lives.  She says that since most families look at girls’ education as unnecessary, she was at home until she got an opportunity with Panyadoli Vocational Training Institute, and this has completely changed her life.

Caroline is earning a good living. She is still working for someone else, but saving so she can open her own salon soon.
In her free time, Caroline teaches other people, mostly young girls, how to do hair. She is able to provide for herself which she wasn’t able to do before when she could only have one meal a day. Now she is earning more and can get better food. Caroline says that challenges in her life have reduced but what remains is that at work her employer often delays to pay her. Another challenge is that sometimes a customer comes and she wants a new hair style, and Caroline doesn’t know right away how to do it. Since salon business is competitive, she often loses the customer in situations like that. 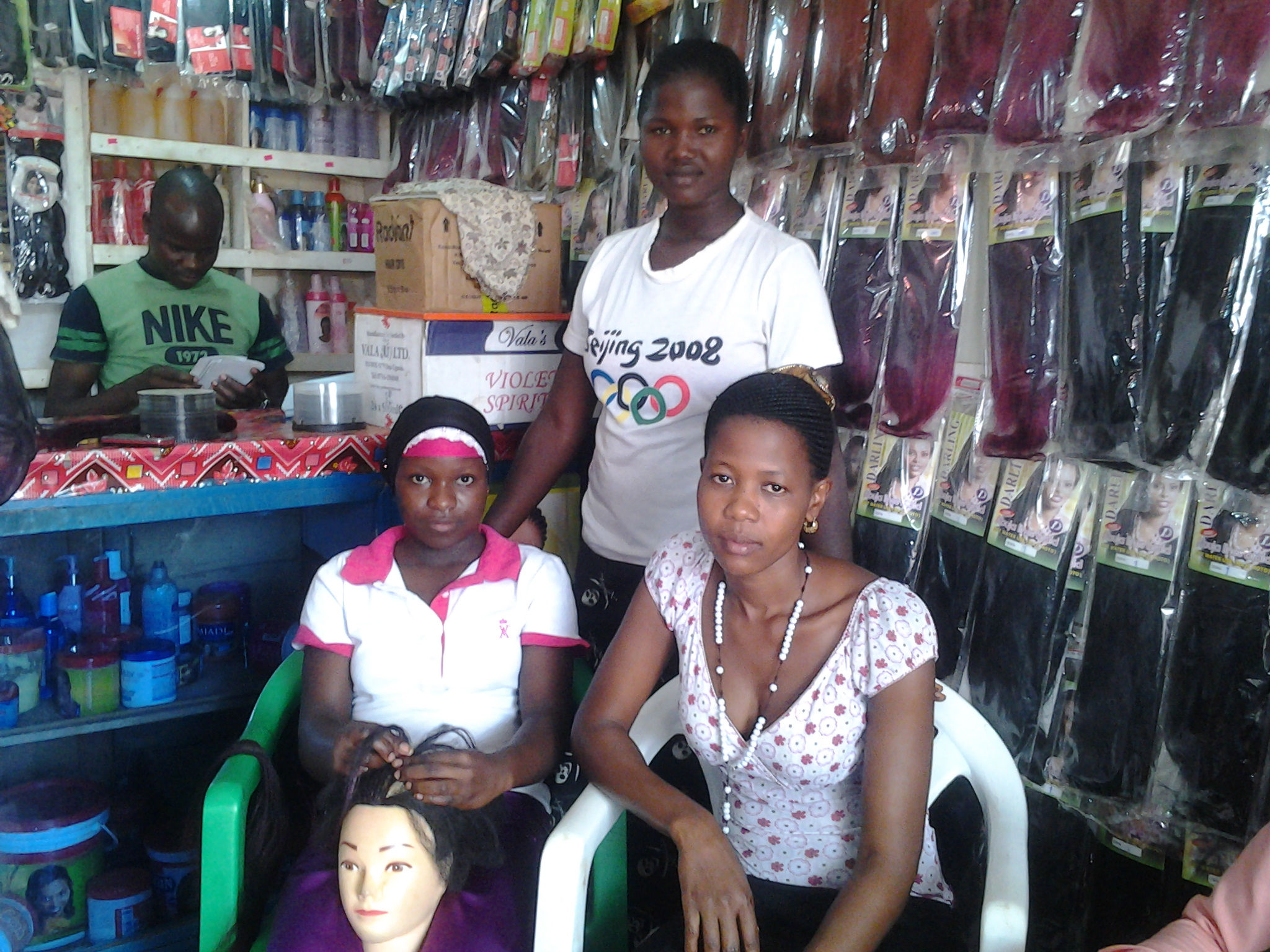 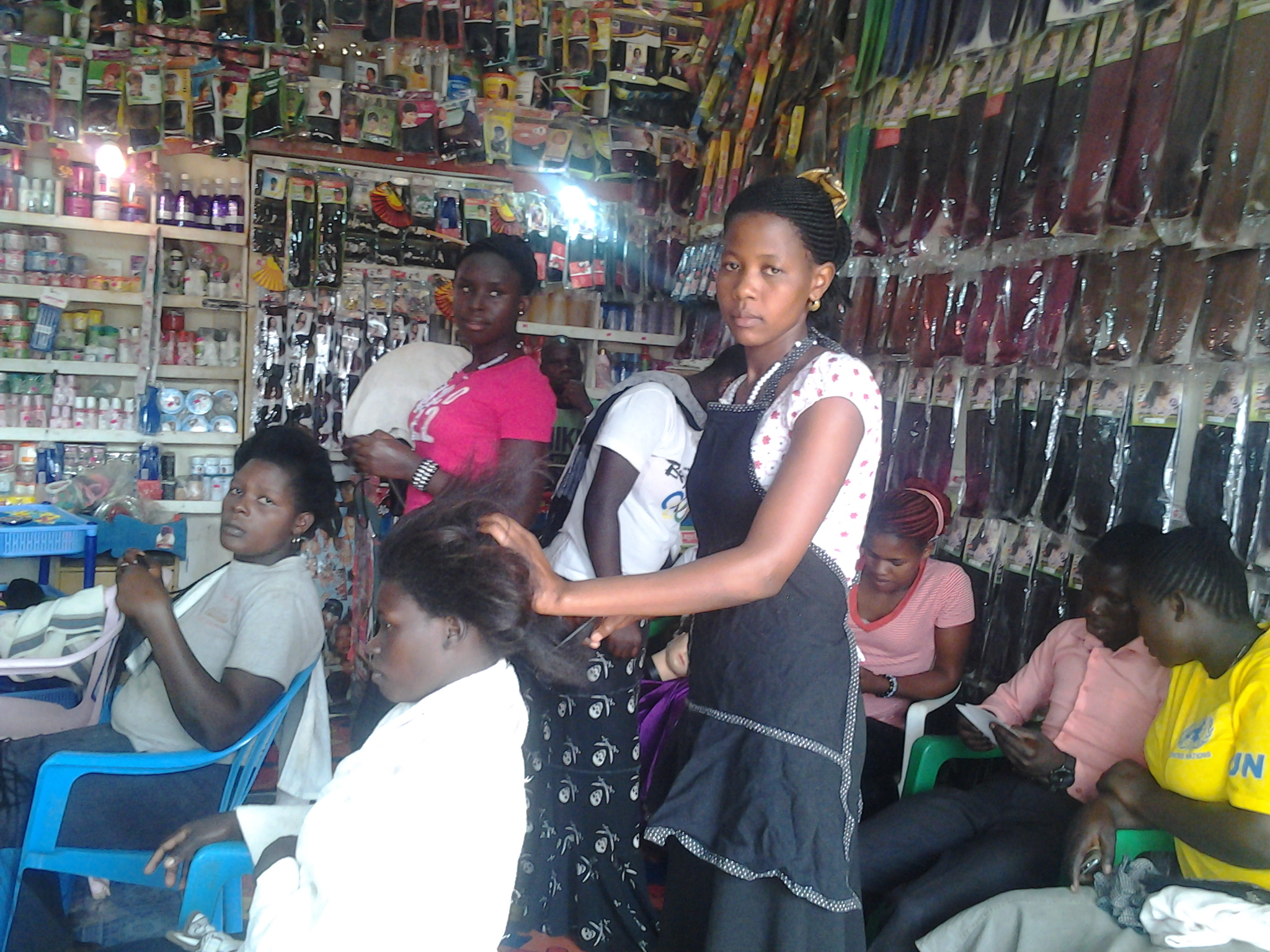 Caroline working on her client in the salon in Bweyale

As a young enthusiastic woman, looking at the unemployment levels in the country, Esther had a small amount of savings which had come out of crops she had sold, and she went to the market and bought materials to start her business. She currently works under a tree close to her home. She is a very optimistic person and continues to save to soon open up her own shop. Esther says she finds it hard sometimes when it comes to finding clients because she has to look for them and also since she works at home, some hair styles that need to use power she cannot make hence losing customers to those who have access to electricity.

She says it’s challenging that since she works from her home, some people think she is desperate which is making her vulnerable as  some clients try to manipulate her by not paying her the full amount for her products and services. It also makes it more challenging to market herself. 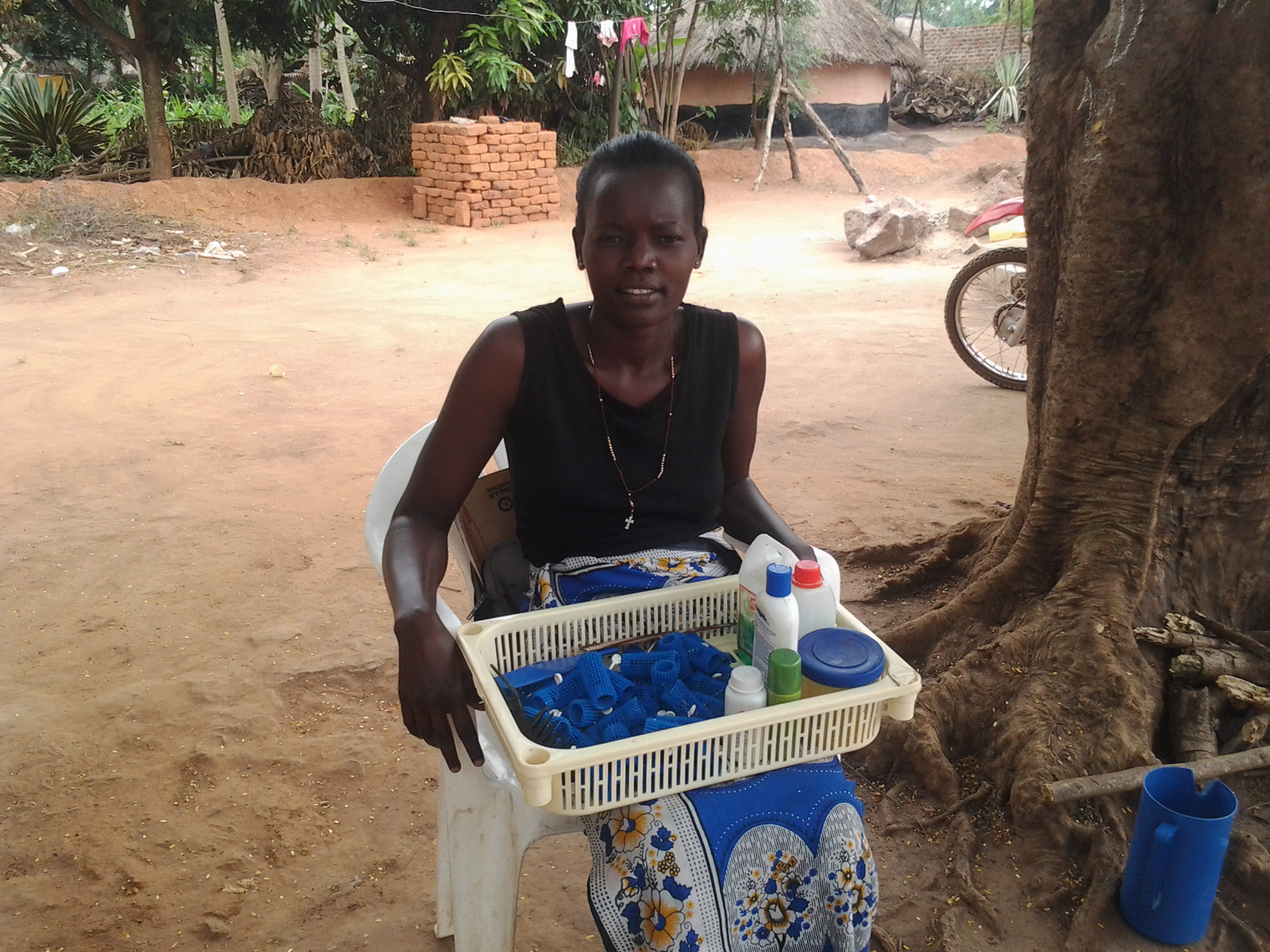 Esther at her home waiting for her clients under a tree