Project Goals:
Upgrade and maintain the Panyadoli Health Care Centers at a high level of hygienic and operating standards.

Health status of the population improved through:

Summary of RMF/WCF-sponsored activities carried out during the reporting period under each project objective (note any changes from original plans):

Number served/number of direct project beneficiaries (for example, average number treated per day or month and if possible, per health condition).

Despite the cease-fire and discussions to end the South Sudan crisis, no agreement has been reached and fighting has continued. The implication of this is that more refugees will keep coming. This requires continuous and additional funding to provide services that will match the increased population of refugees.  Currently, we receive over 80-100 refugees per day.

Delays in PHC funds as the government doesn’t follow the quarterly releases and low funding (5,000,000/= per year). Inadequate staffing results in delays in blood screening which affects time taken to access treatment by the patients. Delays in accessing services at Kiryandongo Hospital due to language barriers and lack of a referral focal person. Lack of treatment for chronic diseases, especially high blood pressure.

The laboratory block has multiple cracks and needs renovation to ensure safety of staff and patients.
Lack of a psychiatric nurse at the health centre, hence high referrals.

Daniel is a 1-year-old boy from Panyadoli B. Daniel was diagnosed with malnutrition at Panyadoli Health Centre III where the doctor and the medical team took action first and initiated several procedures and put him on outpatient therapeutic treatment plus plumpy nut. Daniel’s mother said that they came to the health centre when the boy was in a very bad condition, with his whole body swollen. Daniel could not eat but after 2 days at Panyadoli Health Centre TFP, Daniel started eating food and milk after introducing him to F75 and F100 at the centre.  Daniel was also diagnosed with malaria. It currently being rainy season; malaria in general is a major threat to young children since in most cases families lack mosquito nets to help them prevent the disease. Daniel was treated, and after 2 weeks in our health centre released in good condition.  Daniel’s mother was taught how to use mosquito nets and was given one for free, thanks to RMF/WCF.  Daniel and his mother left the health centre with big smiles on their faces. 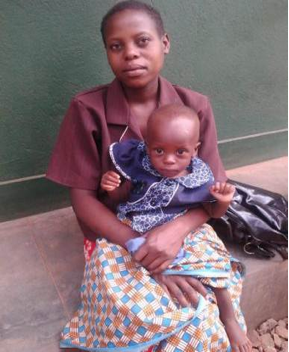 Daniel with his mother, waiting for their discharge

Janette is a 1-year-old girl from Bweyale town council. As a result of the continuous outreach programs done by the RMF medical team, Janette was amongst the children that were identified in the community.  When Janette was brought by her mother to Panyadoli Health Centre III, she was diagnosed with malaria, and according to the doctor at the centre, Janette was also suffering from malnutrition and a bacterial infection. Janette was treated with Amoxicillin and therapeutic milk F75 and F100 plus IV Artesunate, IV Ampicillin, and V Gentamicin. Janette was discharged in good condition. 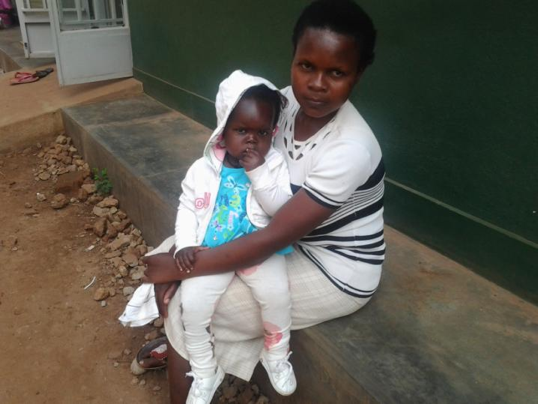 Janette with her mother on the day of her discharge

Lakesa is 1 year and 7 months old. Lakesa and her family live in cluster A within the settlement. Her mother said that she brought her daughter when the skin of the girl had started changing, experiencing rushes, and the appetite of the girl had disappeared, after proper check-up from our RMF doctor at the health unit, Lakesa was identified with acute malnutrition which has become common for the children in the settlement due to an unbalanced diet. Very often these children depend on only one type of food as their mothers also lack enough food for themselves to generate enough breast milk. The girl was put on IV Ringer’s Lactate, IV Gentamicin, IV X-pen, and IV Artesunate With this treatment Lakesa showed great improvement. She was given supplementary feeding as well.
The skin rushes have disappeared, and as of now Lakesa’s skin is smoothing out as she is getting better and better, and her mother is excited to see that her child has improved tremendously.  She gives thanks to God and the RMF medical team. 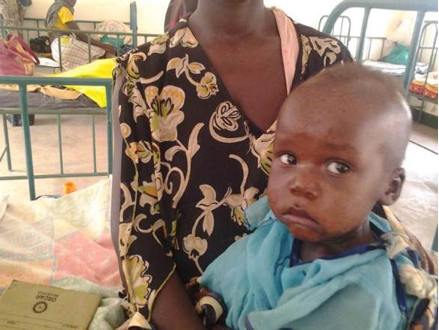 Lakesa on her mother’s lap

Otim Kisa Kenneth
Otim is 9 months old, from Mutunda, born into a family of 15. Otim fell victim to a poorly balanced diet, exposure to mosquitoes, and to competition for food in his family as his mother did not have enough milk to feed the child. The only available food for Otim was porridge. He started to develop a severe skin condition. Otim came to our health centre severely malnourished; with a respiratory tract infection, and with malaria. He was put on IV Ampicillin, IV Gentamicin, IV Artesunate, and Diclofenac injections, as well as IV Dextrose 5%. Otim was also given therapeutic milk, F75, F100 to help him gain weight, and to develop an appetite thus improving his health.  RMF’s outreach programme has helped a lot of children such as Otim. They often get forgotten in the community, and their mothers do not bring them to the health centres out of shame. 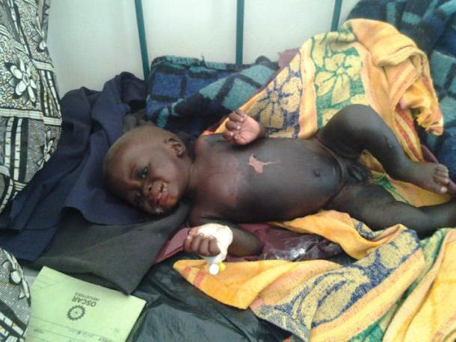 Otim at the health centre

The Panyadoli Health Centres, located in Kiryandongo Refugee Settlement near Bweyale, Uganda, provide healthcare services to over 100,000 refugees from Kenya, South Sudan, DR Congo, Burundi, and Rwanda, as well as members of the host community.