The fighting in Juba which erupted on December 15th, 2013 and later spilled over to other states in South Sudan made it difficult for the JCONAM college staff and the students to return to their various homes for the break, as it happened right at the time the college had just closed for Christmas holiday.  Many of the students were stranded on campus or within Juba, but are all now back on campus after the break completed and a ceasefire has held.  The school is still waiting for all of the teaching staff to return but has been able to start the semester again with less staff.

Sponsorship of second and third year nursing and midwifery students at the Juba College of Nursing and Midwifery through provision of uniforms, skills laboratory equipment, clinical training equipment, books, stationery and Information Technology (IT) equipment. 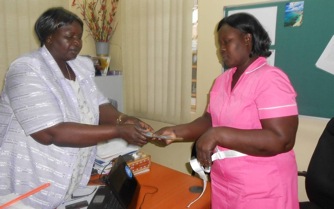 Deborah Mathew is a 25 year old South Sudanese national from Malakal, the State capital of Upper Nile State. She is the current second year midwifery student at JCONAM.

Deborah is an orphan who lost both of her parents at the tender age of 4 and has been raised by her uncle who had three children and has been living with them happily before the war broke out mid December 2013 in Juba.

During the fighting between the government and opposition forces for the control of Malakal town, all of the family of Deborah’s uncle were killed in front of her (the uncle, wife and their three children), with the  uncle’s wife being killed after she resisted being raped. In a similar incident four of her relatives were burnt inside their houses, while others were drowned in the ferry accident which sunk in Nile River on the 12th January with more than 200 people.

Deborah managed to survive by hiding in a dilapidated pit latrine which had been abandoned for some time.  She survived there for three days without food or water. On the fourth day she heard voices of women passing by and she screamed for help, lucky enough they came to her rescue and one of them, Nakenisa (a Dinka woman) escorted her to UNMISS camp. Deborah then reconnected with the principal of JCONAM, Petronella, through a phone and the principal worked very hard in collaboration with to ensure that she was booked on a UN flight and flown to Juba.

Deborah has been very frustrated and said in front of us while tears were rolling through her cheeks,
“Now I have lost everything, my parents, uncle and family, my relatives; I am left alone in this world, God why me? My intention was to study and go back and help my community, now where do I go?

After hearing Deborah’s tragic story, RMF South Sudan responded initially through provision of emotional and social support continuously to enable her concentrate on her studies and achieve her dreamed goal and later monetary support of 1,000SSP ($330) to help her purchase essential items like clothes and other basic necessities. Through this support, Deborah has managed to come out of that tragic moment and is now fully concentrating on her studies. She deeply appreciated the support given to her by RMF and promised to work hard in school and conduct delivery professionally with dignity and respect regardless of any ethnicity because “we are all South Sudanese”. 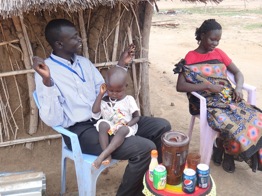 Peter Atiep is a South Sudanese national from Upper Nile State, Baliet County. He is married, has 5 children and is currently a second year nursing student at JCONAM. When the fighting broke out in Juba in mid December 2013, Peter and his family were in his home town Baliet, which was eventually overrun by the opposition forces on January 11th, 2014.

As everyone took cover and ran for her/his safety, Peter got separated from the wife. Peter ran with the first three children while the wife ran separately with the last two children. Peter finally made his way to Palogue (Malut County in Upper Nile State) then to Juba on January 19th, 2014 and immediately proceeded to Kakuma refugee camp in Kenya where he left the three children with a relative and returned to Juba to continue with his studies. Fortunately Peter managed to connect with his wife who had taken refuge in Renk County (Upper Nile State) and requested her to come to Palogue where there is operational airport with regular Dar Petroleum flight. Peter desperately wanted to reunite with his wife and children but was unable to afford to air fare for them all.

During this critical moment, RMF stepped in and facilitated the transportation of Peter’s wife and the two children from Palogue to Juba by air on March 28th, 2014 and then to Kakuma refugee camp by road on March 30th, 2014.

“God bless RMF for doing all this to his family and prayed that RMF grows bigger and bigger. I now know that we the South Sudanese are ONE people, it does not matter where you originate from and one’s ethnicity should not be a factor when delivering services.”

He couldn’t believe this, his fellow South Sudanese from different regions and ethnicities had coordinated all of this and made sure his wife and children made it safely to Juba and were now going to facilitate their travel to Kakuma Refugee Camp in Kenya. He now believes in really believes in unity and says:

“Every individual is a child of God. God bless you all, the donors and RMF as a whole. Now will concentrate on my studies, will keep updating you about the condition of my families. Thanks and God bless you.  Peter then confirmed to RMF the arrival of the wife and the children to Kakuma and the family is doing well after reunion. Peter is now a happy student concentrating on his studies without further disturbances. 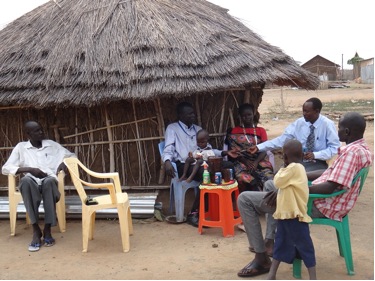 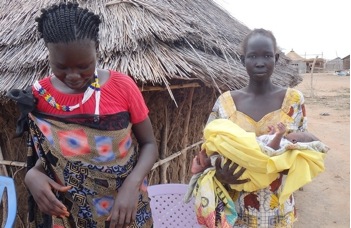 South Sudan’s maternal mortality rate remains one of the highest in the world – 789 women per 100,000 live births. This means that 1 in 50 women will die from pregnancy-related causes, as compared to 1 in 4,900 in developed countries. Currently in South Sudan, only about 19% of deliveries take place at a health facility, and despite improvements, there is still a critical shortage of midwives throughout the country. Real Medicine Foundation initiated and co-founded South Sudan’s first-ever accredited college of nursing and midwifery with St. Mary’s Hospital Juba Link, Isle of Wight, and the college was established in collaboration with the Ministry of Health of South Sudan, UNFPA, UNICEF, UNDP, WHO, CIDA, and the Japanese International Cooperation Agency (JICA), and in partnership with and with financial support from World Children’s Fund.

More Reports on: Juba College of Nursing and Midwifery Archive