According to the latest available data, the overall number of refugees, asylum seekers, and migrants in Serbia is estimated to be around 7,600. Most of them are sheltered in 18 heated government facilities. Many are children (47%) and women (16%), with 37% being adult males.

RMF Serbia has recognized and anticipated that border closures across Europe will increase the number of refugees who will require medical help and psychosocial support, and we commenced this work in early March 2016. Since then, RMF Serbia has examined and helped over 14,000 refugees, escorting them to secondary and tertiary care facilities and providing necessary treatment and health care in the field.

The majority of refugees and migrants are arriving in very poor medical condition from long periods of walking, and some of them are being beaten by the Hungarian, Croatian, and Bulgarian police on the borders. A number of those cases require multiple hospital visits, overnight stays, and ongoing monitoring. RMF Serbia’s work is focused on providing referral services to secondary and tertiary care and advocating for refugee patient rights, but also in resolving medical problems at RMF’s mobile medical clinic in the Obrenovac refugee camp (30 km from Belgrade) that don't involve hospital visits. RMF Serbia continues to identify and provide emergency triage to extremely vulnerable individuals in the field. 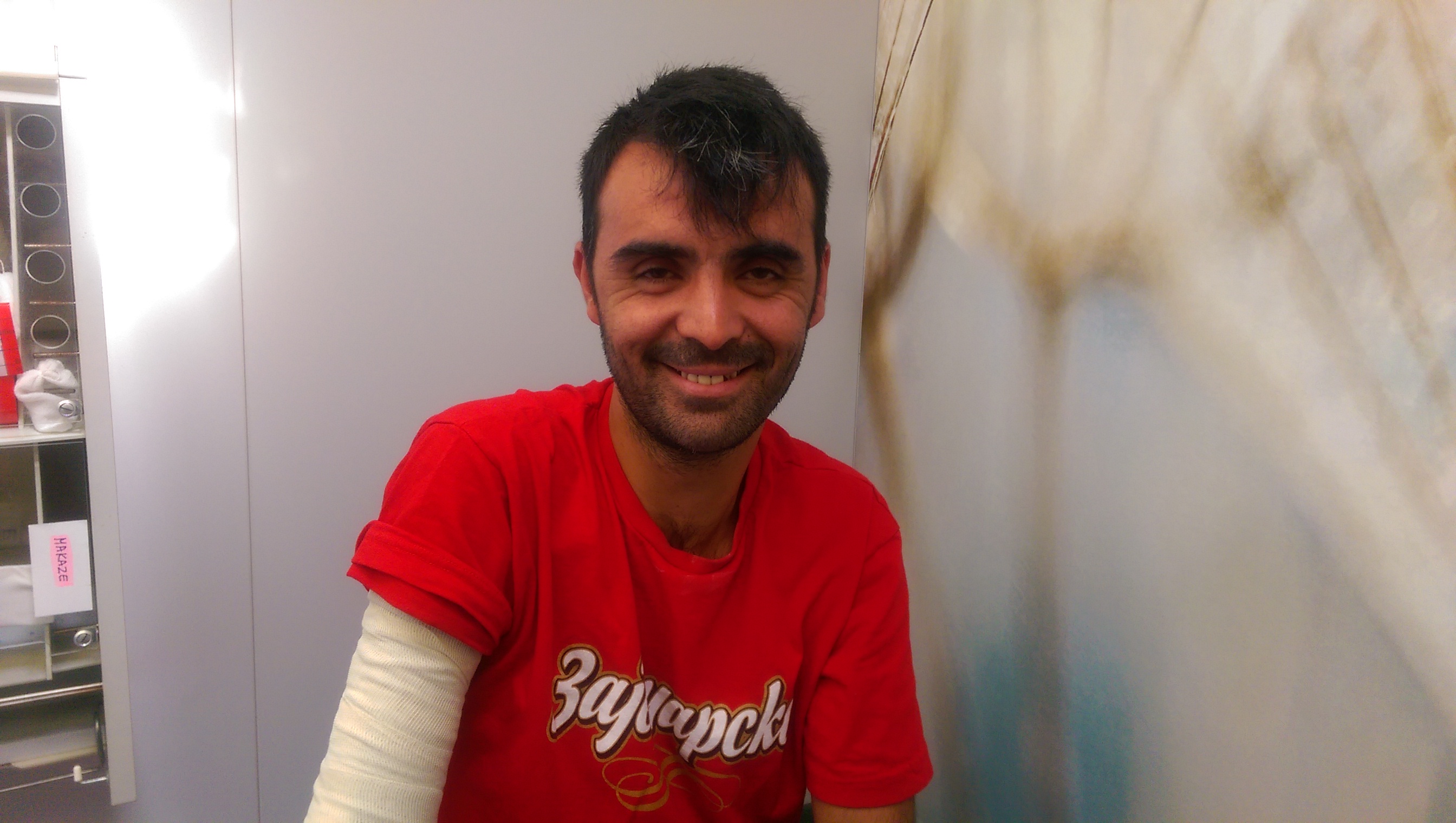 Nick was born 28 years ago in Jalalabad, in eastern Afghanistan, a city located 150 km (95 miles) from Kabul, the capital city. His birthplace is a significant center of Pashtun culture, which is considered to be an important part of the identity of Afghanistan. Nick used to be a farmer back in his country. He fled from Afghanistan 17 months ago due to political turmoil, leaving his wife and three children. Before reaching Serbia, he traveled through Iran, Turkey, and Bulgaria. He has been residing in Serbia for 9 months, together with many his compatriots, who have been trying to cross borders into surrounding EU countries. 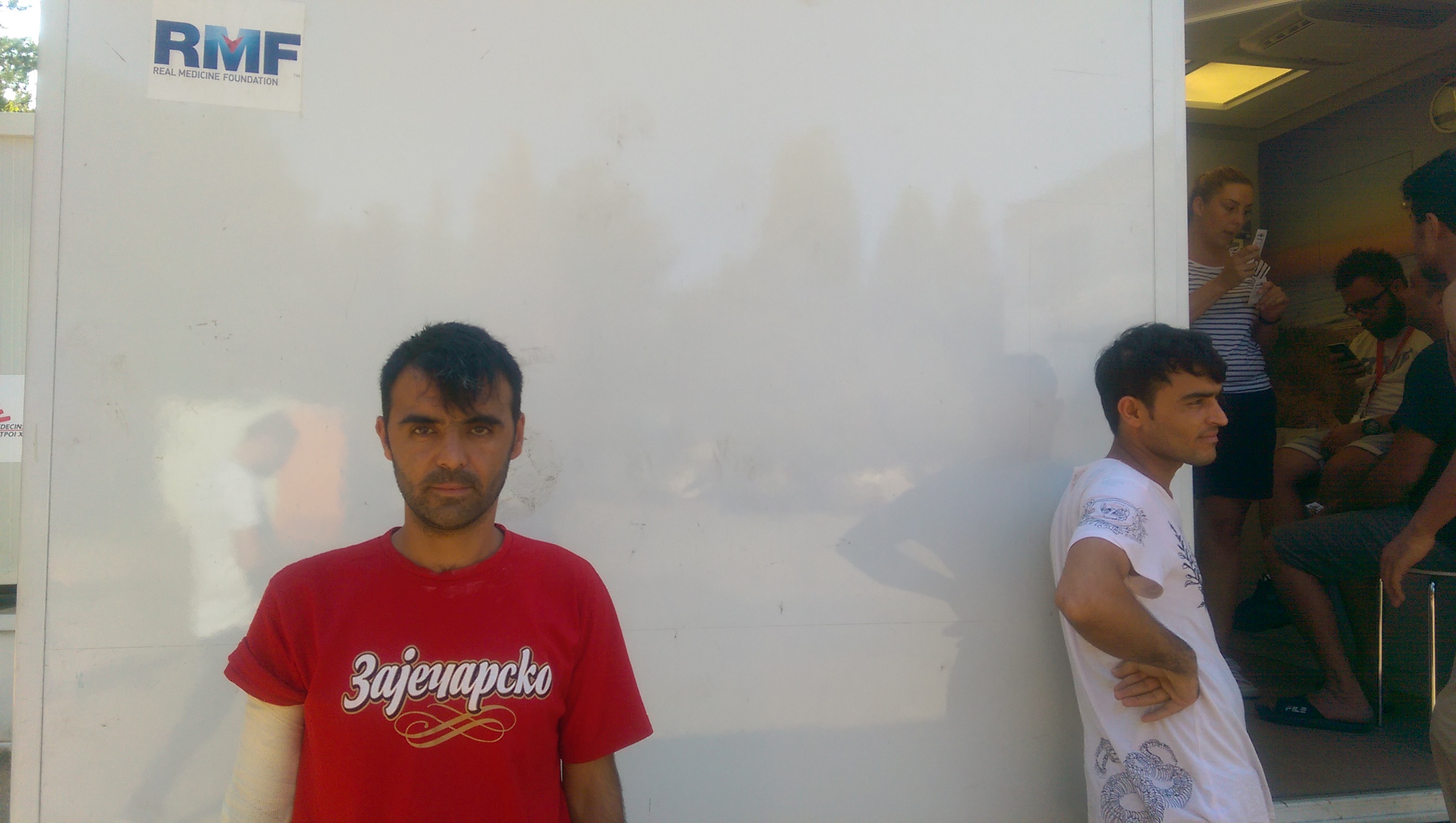 At the end of April 2017, Nick was playing cricket, a very popular sport in Afghanistan, with his friends in the Belgrade city center. While playing cricket, Nick had fallen on the ground, breaking his right radial bone and suffering a contusion in the elbow area. He was taken to the emergency department and his right arm was immobilized and a gypsum plaster cast was applied. In the following days, Nick felt a strong pain in the area of fracture. His right arm was getting swollen, and the plaster was removed. His condition was deteriorating, and he was taken by RMF’s medical outreach teams to the hospitals on multiple occasions for consultations with an orthopedic surgeon. No doubt, the infection has developed and was progressing fast.

RMF insisted on decisive and a quick response. Oral antibiotic therapy was started, and daily dressing of the arm was performed. Nevertheless, Nick was feeling dizzy (his blood pressure was low), he was breathing heavily, he had a spiking fever, and RMF medical officers diagnosed him with septic shock. He was immediately taken to the hospital by RMF’s medical outreach team and was admitted to the Clinic for Orthopedics at the Clinical Center of Serbia, Department of Sepsis. Nick’s final diagnosis was necrotizing fasciitis, commonly known as flesh-eating disease. He stayed in the hospital for month and a half, where he underwent two surgeries in order to remove dead tissue. He barely avoided amputation of the right arm and is now recovering well. 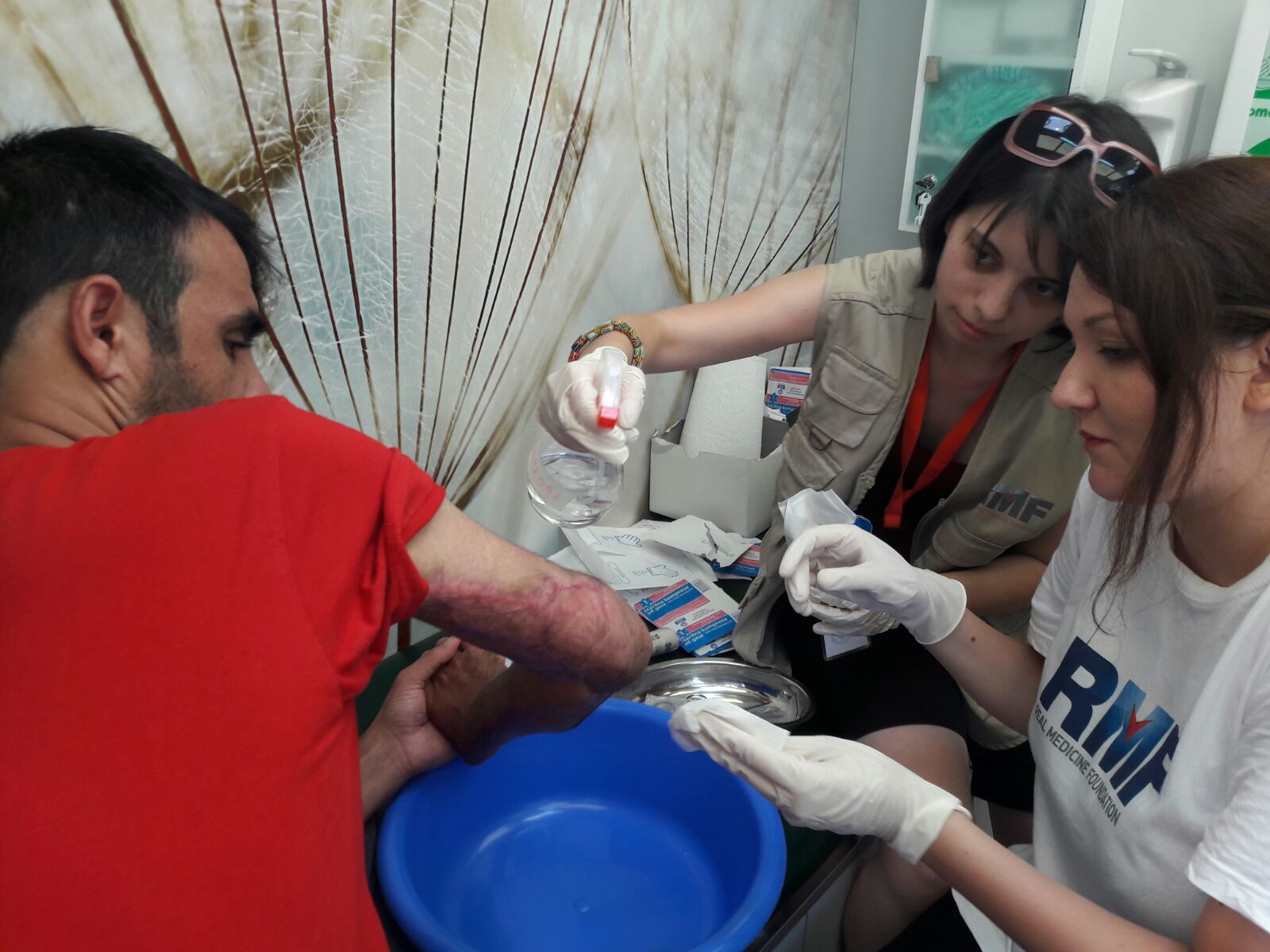 Since being discharged from the hospital, Nick regularly comes to RMF’s mobile medical clinic in Obrenovac for further treatment and rehabilitation of his arm; he still needs to regain motor function of the arm. Thanks to Nick’s strength and RMF Serbia’s team effort, his right arm and life were saved.

RMF has been responding to the refugee crisis in Serbia since January 2016, by providing comprehensive protection and medical services, including emergency triage, to persons of concern. Our teams work in and around the Belgrade city center and at Obrenovac Transit and Reception Centre, the second largest refugee camp in Serbia. We operate 3:00 PM to 10:00 PM five days a week at our mobile medical clinic located in Obrenovac, with a second medical team providing referrals for secondary and tertiary care institutions. From 2017 to 2018, we also provided services near the border with Croatia, operating the medical clinic at Adaševci Transit Centre from 4:00 PM to 12:00 AM, seven days a week.

Additional programs include a mobile dental clinic at Obrenovac Transit and Reception Centre—the first of its kind in Serbia—providing dental care for migrants, who previously only had access to emergency interventions. RMF Balkans also distributes hygiene kits at six camps throughout Serbia to help improve personal hygiene and prevent the spread of infectious diseases. To improve the residents’ quality of life, RMF renovated Obrenovac Transit and Reception Centre in 2018 and continues to maintain and use the renovated facilities to conduct cultural and empowerment activities.