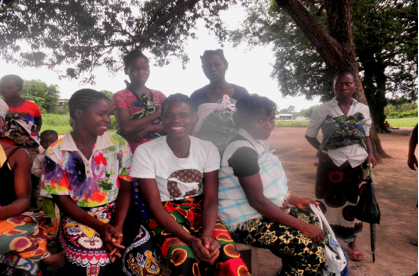 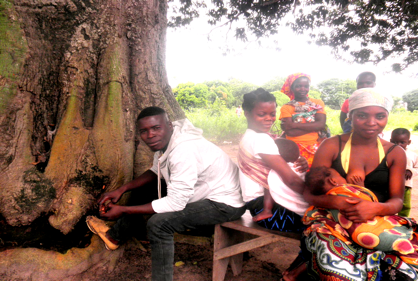 Provision of primary health services to Furquia & Mbawa communities:
The Mobile Clinic team continues to strengthen the technical and logistical capacities of local personnel through clinical mentoring activities and on-the-job training. In addition to daily lectures given on disease prevention, community members benefit from health counseling and testing in screening rooms where, on a voluntary basis, individuals can be screened for malaria, TB, STI, HIV, etc. The MC team also provides management support and assists in medication (ARVs, cotrimoxazole, isoniazid, ferrous salt, mebendazole, etc.) and blood sample transport.
During the 4th quarter, supervision activities and TA in the areas of C&T, pharmacy and MCH continued.

Furquia Health Facility: There were no changes in the health facility staff; all of them had been oriented in previous quarters and are working in their routine areas with the support of the MC and clinical mentoring.

There are 3 active GAAC in Furquia HF. As result of the exit of the FGH District Community Health Supervisor and the arrival of a new one it took more than one month to get oriented and integrate in the District; community activities dropped during this period, and no new GAAC were constituted during this quarter in Furquia.

Also during this period Malaria prevention, diagnostics and treatment were prioritized in anticipation of the upcoming rainy season (when malaria cases increase).

HIV testing is also implemented in vaccination sector following the recommended strategy of testing in every entrance gate to the health unit.

Continuous coordination is maintained with the 3 existing Health Councils (Conselhos de Saude) with 4 monthly meetings held among Health Councils and health facility staff, each averages 50 participants).
Overall, there are 7 support groups helping in Furquia, as follows:

During the reporting period, 4 meetings were held with every support group (with an average of 7 participants per group), MC Counselors and HF staff participate in those meetings.
Ogumaniha volunteers are still providing support in the identification and referral of malnourished children and in the preparation of enrichment foods.

Mbawa Health Facility: There were no changes in the health facility staff; all of them had been oriented in previous quarters and are working in their routine areas with the support of the Mobile Clinic and clinical mentoring.

20 Active GAAC exist in Mbabwa HF. As in Furquia, the exit of the FGH District Community Health Supervisor and the arrival of a new one took more than one month to get oriented and integrated in the District; no new GAAC were constituted during the reporting period.

Malaria prevention, diagnostics and treatment were foci in preparation for the rainy season.

HIV testing was also implemented in the vaccination sector following the recommended strategy of testing at every entry point within the health facility.

There are 4 existing Health Councils (Conselhos de Saude), in Mbawa sede, Tatioi, Maroda and Machawa, similar to Furquia, to reinforce community clinical linkages, and they meet twice per month.  During the quarter, activities focused on coordinating monthly meetings held between the Health Councils and Health Facility Staff (and participants are Traditional Birth Attendants, Community Leaders, DOTs Volunteers, Health Councils Volunteers, APES, Religious Leaders and Health Technicians) with an average number of 60 participants in Mbawa sede and Taioi, and 25 participants in Maroda and Machawa. Consented case finding is supported by 4 ETC volunteers and 3 DOTS volunteers who participate in the weekly Adherence Committee (Comite de Adesão CAD).

In October FGH District Community Health Supervisor was transferred to another district and a new one arrived to replace him; it took more than one month for the new one to get oriented and integrated in the District. As result, numbers for community activities dropped during the reporting period.

Due to the absence of the Community Health Supervisor for more than one month and the arrival of a new one, the number of visits for priority groups was much lower than in the previous period. Patients visited during the reporting period include:

Although the collaboration between UNICEF, ICS (Instituto de Comunicação Social) and FGH was reinstated in Q1 to ensure timely Community Health Promotion, Information and Mobilization in sites supported by the Mobile Clinic including Namacurra District, it has not been well coordinated. A meeting with UNICEF/ICS is still pending to discuss eventual constraints and improve collaboration.
As in previous reports, other groups like Traditional Birth Attendants, Traditional Healers, Home-Based Care volunteers continue to provide information and health promotion among the community and refer pregnant women and other patients to the health units.

PICT within Expanded Program on Immunization (EPI)
The provider-initiated HIV counseling and testing program within Furquia’s Expanded Program on Immunization was created to improve the diagnosis and tracking of HIV among breastfeeding mothers and children that have not been tested or lack routine control to ensure access to appropriate care.  The project’s Preventive Medicine Technician receives the support of the Mobile Clinic’s Maternal Child Health Nurse, Geraldina, and General Medical Technician, Elevio, for this important initiative as well as the Furquia health facility’s laboratory. In the last three months, the program enabled 37 women and 10 children to be tested, of which six lactating women and three HIV positive children were referred for antiretroviral therapy (ART).

In the last quarter, lectures on HIV prevention; testing and treatment; mother-to-child transmission of HIV; the importance of childhood vaccinations and regular weight monitoring; child-at-risk consultations and involvement of mothers in pediatric consultations were developed for patients waiting at the health facility and for support group volunteers. The EPI Technician supports raising the awareness of these women who continue to join the extended vaccination program with their children, as well as continued pediatric consultations and health testing. As one patient explained, the benefit of health testing is to “allow early diagnosis of HIV and to engage patients in the treatment and follow-up, reducing the exposure risks of HIV infection and re-infection.”

PICT is implemented in the clinical setting and is now part of routine procedures, with all Furquia health care providers trained in HIV counseling and testing. Initially, the Mobile Clinic technical team initiated PICT in all clinical sectors except EPI. However, after the necessary training was conducted, the EPI department of the health facility is also implementing PICT. It was difficult to treat mothers who previously came to the clinic for consultation and health testing.

However, with the lectures to raise awareness, the implementation of PICT in the EPI sector, and the placement of the EPI manager there has been improvement. Some breastfeeding mothers were invited to meet and discuss the advantages of HIV testing, share how each overcame the fear of getting tested and also provide feedback on the barriers that prevent some from adhering to the child-at-risk consultations. The Preventive Medicine Technician continues to support and strengthen this PICT initiative with daily lectures on various topics that emerge. 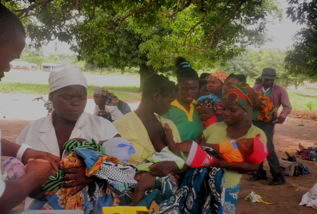 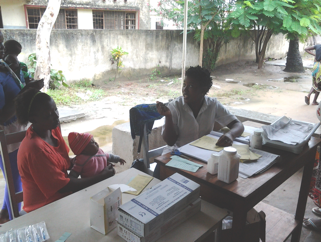 photos: mothers line-up for vaccinations after a lecture about PICT in EPI sector at Furquia Health Center; consultation at EPI clinic 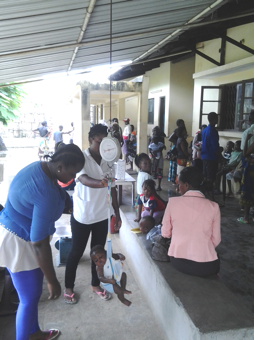 PICT within Child-at-Risk Consultations
Testimonial: “My name is Netinha Paulino. I am 29 years old, born in Furquia of Namacurra district in Zambézia Province, Mozambique. I currently live in the main headquarters of the district with my four children. During one of my pregnancies I had a pre-natal consultation where I was offered HIV counseling and testing.  At that time, I refused to do an HIV test to ensure my baby is born HIV free despite the nurse’s suggestion for me to do so. With the passage of time we had a daughter, Isabel, who is currently seven months old. At five months old Isabel was never healthy, and the nurse at the EMI visits always told me that she was not increasing in weight. I was very worried, and in November, at the request of the Preventive Medicine Technician, I was tested for HIV; my result was HIV positive and thankfully my daughter was negative. I was accompanied to the facility’s ART service sector, where I was enrolled onto ART treatment, and my daughter was enrolled in the child-at-risk children clinic for PCR analysis and prophylaxis.” 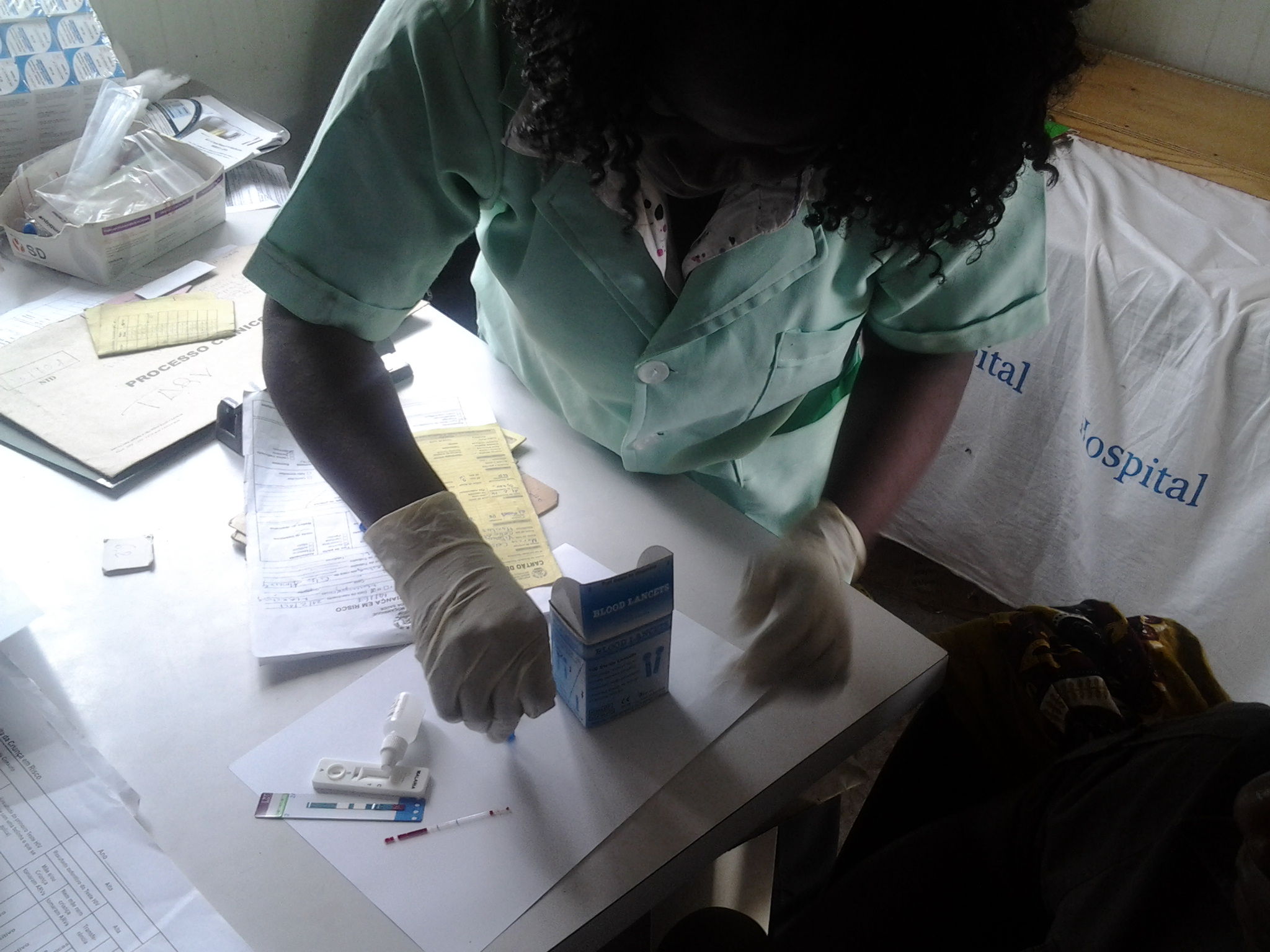 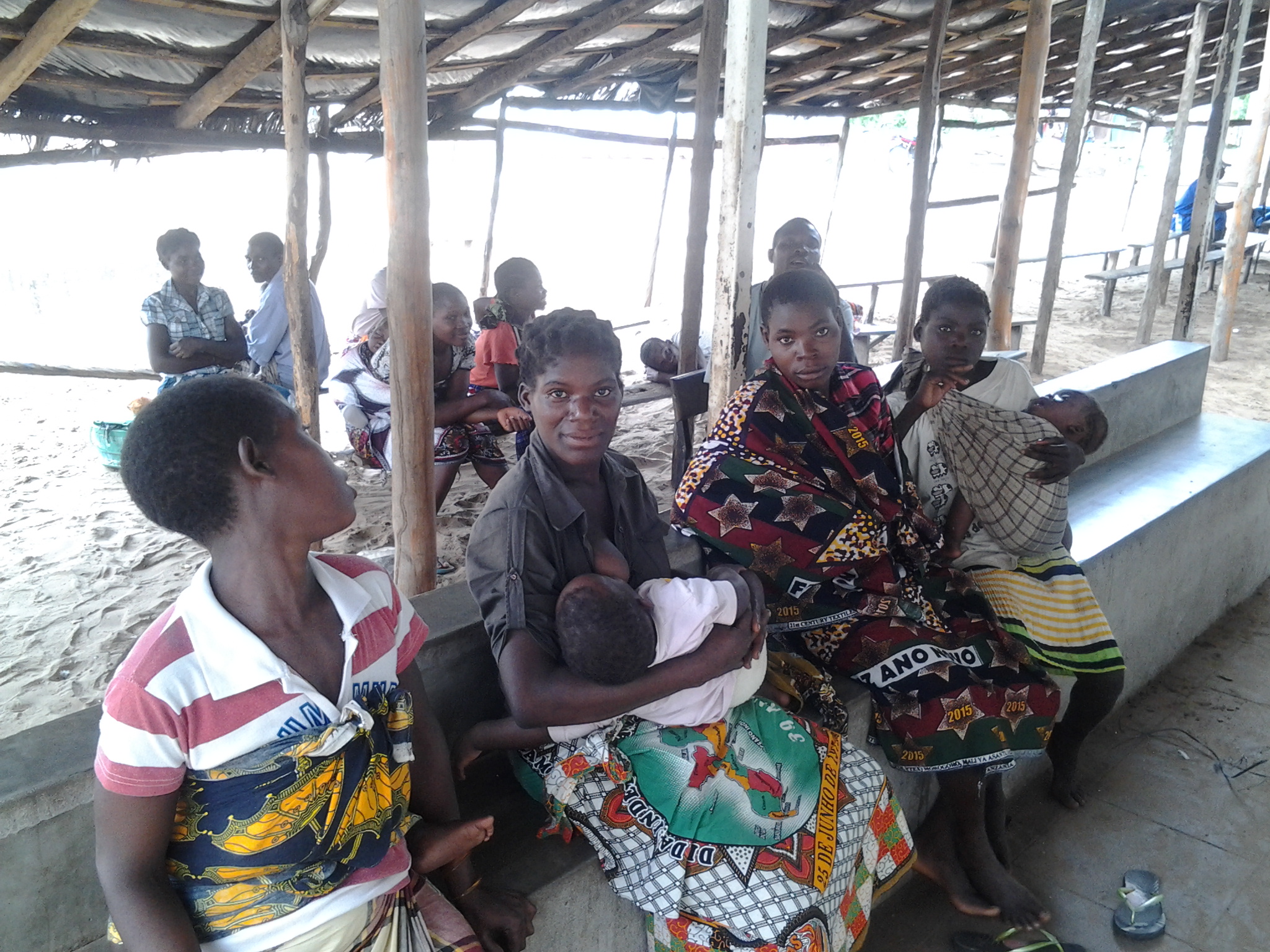 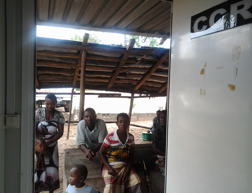 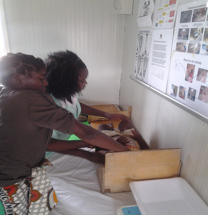 Partner Involvement for Family Planning
Arthur, 23, and his wife Julia, 19, live in Furquia. The young couple has a daughter named Rose who was only 5 days old the day they came in together for a post-partum consultation. Prior to the consultation, which was conducted by the Mobile Clinic’s Maternal Child Health nurse, the couple received useful information on family planning and had the opportunity to ask any related questions. During the consultation, both Julia and her husband received routine analysis and testing for HIV, and with the support of ESMI nurse they chose an effective method for family planning
Husband and wife were advised to make the choice together and to agree on a family planning method that is most appropriate for them. Toward the end of the session, the two were advised about scheduling a follow-up family planning consultation. Husband Arthur shared his commitment to ‘healthy living for his family’. 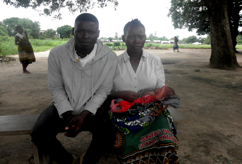 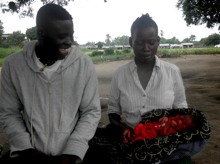 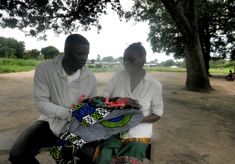