Project Objective:
To increase the number of people with access to health services as well as the number of patients enrolled in HIV care and treatment services in the targeted areas.

Implementation of Option B+

In an attempt to eliminate the vertical transmission of HIV, the Ministry of Health recently adopted a strategy called Option B+, which entails provision of universal access to anti-retroviral treatment for all pregnant and lactating women testing HIV positive. On July 8, 2013, the implementation of Option B+ began in the peripheral health units that receive support from the Mobile Clinic. This has been met by the common challenges of operating in Zambézia Province, such as scarce human resources and lack of consistent availability of anti-retroviral medication in the peripheral health facilities.

With the increase in number of mothers getting tested for HIV, there has been an increase in the identification of exposed children, which are then followed by the Child-At-Risk Clinic.During the report period, there was a significant increase in HIV-infected children who initiated ART.

With the aim to inform and mobilize the community on Option B+, regular lectures have been given in the community, involving community leaders, traditional healers, traditional birth attendants, midwives, community-based organizations and activists working in health programs. Since this is a new strategy with a potentially large impact on public health, the main beneficiaries – the local community – must be very well informed.

Mobile Clinic support for the health servicesin Furquia hasbeen inplace for over 7 months,and a major milestone has been met by providing maternal and child healthfor the first time.During this quarter, one of the large challenges was rehabilitation of the infrastructure and equipment of the consultation areas, as well as encouraging the Ministry of Health to reinforce the human resources assigned to the health center, including in the maternity services.
With the establishment of a local Maternal Child Health Nurse in residence, the maternity ward in Furquia was able to begin operation in late September, serving local pregnant women.

In order to increase the number of pregnant women delivering inthe maternityward, the MCH Nurse has worked with the local traditional midwives, sensitizing them on the importance and advantages of institutional delivery.The Nurse has encouragedthem to refer pregnant women they assist in the community to the maternityso they can give birthwith the technical support and supervision of the MCH Nurse.

With completion of Mobile Clinic activities in Malei on August 23, 2013, the clinic transitioned support for the implementation of ART services to the Mbawa Health Center. Located 41km from theNamacurradistrict headquarters with a population of approximately 32,624 inhabitants, operations in Mbawa officially began on August 28, 2013.

The population of Mbawa has long hoped for improved access to healthcare services, as theyhave had to travel more than 20km to the nearest health facilities to access HIV/AIDS and TB care and treatment services. The facility has a general nurse, a basic MCH Nurse and a preventive medicine technician, allwithout any training on ART.With the introduction of Mobile Clinic activities, local staff have benefited from on-the-job training in ART service programs (counseling & testing, PICT, PMTCT, pediatric exposure, ART, etc.)to ensure appropriate patient follow-up, even in the absence of the Mobile Clinic.

To enhance utilization by the local population, community mobilization efforts were made prior to the Mobile Clinic’s arrival to publicize the services offered by the Mobile Clinic. These effortsinvolvedlocal community leaders, traditional healersand midwives, CBOs and community activists and volunteers thatwork in healthcare.

For the official launch of the Mobile Clinic services in Mbawa, a health fair was held on 08/30/2013, where about 176 individuals were counseled and tested, with 51 HIV+ results. In addition, to commemorate World Health Day, the Mobile Clinic participated in a health fair organized by DPS-Z, held in the city of Quelimane on 09/14/2013, whereby health-related counseling and testing was conducted. Of the 42 individuals HIV counseled and tested, there were no HIV+ results.

2,313 people benefited directly from activities implemented by the Mobile Clinic during this reporting period.

Mobile Clinic improves Maternal and Child survival with the implementation of Option B+ for the Elimination of Vertical Transmission, Option B+

Anabela Louis is a 24-yr old mother living in the town of Furquia in Namacurra District of ZambéziaProvince, Mozambique.  Her two children, a 7-yr old girl and a 4-mo old boy, were born with assistance from a traditional midwife, because there was no maternity unit in Furquia at that time. With the arrival of the Mobile Clinic in Furquia, Anabela was able to benefit from her first prenatal visit when she was in her sixth month of pregnancy with her second child. In her Mobile Clinic visit, Anabela was advised to get tested for HIV, and after doing so she soon learned she was HIV+. With this news, Anabela was given prophylaxis for the prevention of vertical HIV transmission to her son, born HIV-free in May 2013. Anabela then utilized the post-partum services of the Mobile Clinic, but she was struggling with her own health, having recurring headaches and back pain.

In July 2013, Anabela returned to the Furquia Health Unit for her regular post-partum visit and was introduced to the Option B+ program by the Mobile Clinic’s Maternal Child Health (MCH) Nurse. The MCH Nurse explained the new strategy being implemented that would allow her to immediately begin anti-retroviral treatment for life. Anabela agreed to enroll and start treatment because she was not in good health. Through the enrollment process she was able to participate in nutrition education lectures as well as counseling on ART treatment and the importance of adherence.

Option B+, one of the new World Health Organization standards for PMTCT adopted by the Mozambican Ministry of Health in June 2013, aims to reduce the number of new pediatric HIV infections (< 5 %) by offering effective PMTCT interventions to 90% of HIV+ pregnant or lactating women and their children by 2015, with at least 30% of HIV+ pregnant women initiating ART. As mentioned above, the Option B+ strategy was introduced by the Mobile Clinic in Furquia in July 2013, and the program has received 68 pregnant and lactating women to date. 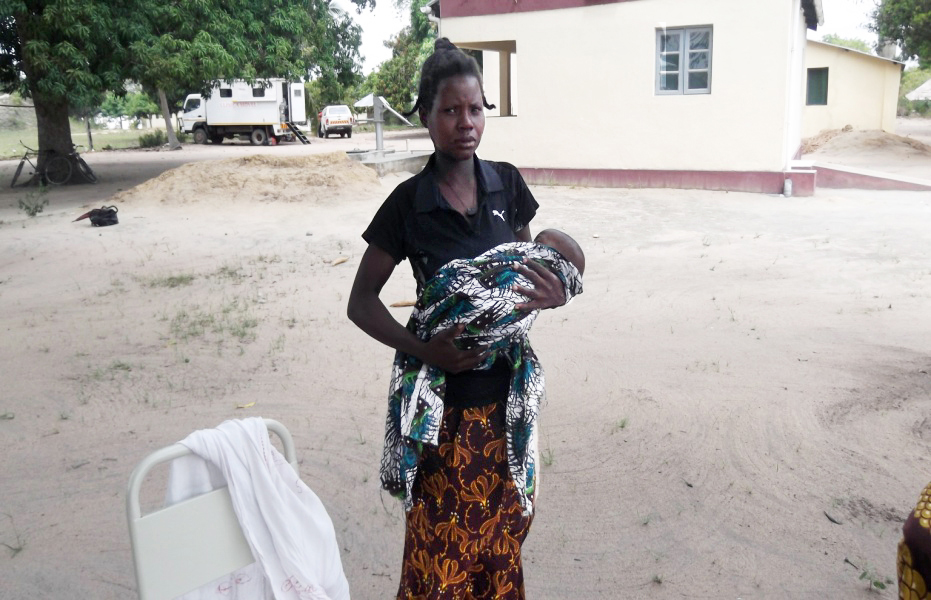 Photo- Anabela with her son at the Furquia Health Center following her post-partum consultation given by the Mobile Clinic’s MCH Nurse.

(Photographer: Etelvina de Sousa; Consent: Verbal consent was received and consent form completed at the time the photo was taken, in October.)

Anabela shared that “before starting with antiretroviral treatment, I was always sick and had difficulty taking care of my newborn. Now I feel better, and my son has benefited from the complete package of consultation services for Children at Risk. He is also growing well and is healthy.”

After starting antiretroviral treatment, Anabela also invited her husband to visit the Mobile Clinic and get tested. Now the two of them are both adherent on ARV treatment. Anabela has been able to pay her experiences forward, as she is also part of a church group that gives lectures to other pregnant mothers, encouraging them to utilize the antenatal services of the Mobile Clinic. The importance of knowing one’s health status and receiving health education from the Mobile Clinic’s MCH Nurse has been instilled in Anabela and her family, and they continue to spread the message.