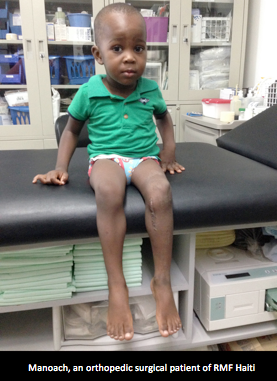 In the aftermath of the January 12, 2010 earthquake, in addition to tackling some of the immediate relief needs, RMF moved forward with a comprehensive long-term strategy for sustainable health services development in Haiti to help rebuild its shattered public health system. Our work during the initial weeks was focused on the provision of medical staffing, medicines and medical supplies and strategic coordination to help meet the surging needs of the health crisis on the ground.

For all of 2010 and much of 2011, RMF provided free clinic services at Hôpital Lambert Santé Surgical Clinic in Pétion-Ville, a facility which since the January 2010 earthquake had never stopped providing much needed care to public patients. Pétion-Ville and the surrounding communes were home to more than 100,000 displaced persons, living in tent communities. This free clinic continued to offer quality healthcare to patients in need of primary, secondary and even tertiary care. We were able to provide for more than 1,800 consultations and 450 surgeries over this time frame.

Five years have passed since most of Haiti's infrastructure was devastated, and while much progress has been made in rebuilding efforts, there is still much work to be done. Social and healthcare status remain dire and worsening because of the now dwindling presence of NGO-run Primary Healthcare Clinics all around the areas of the country most affected by the 2010 earthquake, and even more so in Port-au-Prince. While a very positive initiative, having given more people access to basic care, sadly the effort remained disorganized and unstructured and did not define a clear and continuous pathway for the patients in search of diagnosis and treatment; secondary and tertiary care continues to be desperately lacking.  Never losing sight of our main objective to increase overall access to quality secondary and tertiary care for the entire Haitian population, RMF has kept that vision alive through our partnership with two local Haitian private healthcare institutions, sharing our philosophy, but also by actively researching funding towards much larger partnerships.

RMF continued our Surgical Support Program in Haiti that we had started in 2012, providing complex surgeries and longer term follow up treatment for children and adults suffering from chronic or acquired orthopedic conditions, often extremely severe, ranging from congenital deformities to posttraumatic impairments, in many cases caused by the January 2010 earthquake. Over the past three years, generously supported by Child Survival Fund, Real Medicine Foundation has been able to provide specialized orthopedic care and follow up treatment for 50 children and adults who were desperate for treatment of their posttraumatic or congenital ailment, preventing them from thriving or taking care of responsibilities and their families’ needs.

Most of our child patients were selected at a facility, St. Vincent’s School/Hospital, that cares for children with cerebral palsy, orthopedic, congenital, and trauma related deformities. St Vincent’s was once the only recourse for these children, providing schooling, ambulatory clinic and surgeries but was destroyed in the 2010 earthquake. It is currently operating with only outpatient services and no surgical capacity for the foreseeable future.  These young children and young adults came to St. Vincent’s from the metropolitan area of Haïti’s capital Port-au-Prince as well as the remote provincial towns located in the far southern and northern departments of the country.

2014 Update:
Our dedicated surgical team of two orthopedic & trauma surgeons and one anesthesiologist, have to date performed 50 specialized orthopedic procedures at the Lambert Santé Surgical Clinic in Pétion-Ville, making it possible for these little patients to regain capacity to walk, to do so proudly, free from society’s discrimination for their visible and incapacitating conditions. Real Medicine Foundation has been able to continue providing these complex surgical services as well as the multifaceted follow up care for these patients through generous funding by CSF, with an additional ten patients added to our program in 2014.

The third edition of RMF’s orthopedic surgical program was completed in December 2014 and again benefited children, teenagers and young adults who were incapable of enjoying a normal childhood or starting a meaningful young professional life. This year once more, in view of the severe conditions encountered in our outpatient services, we concentrated our efforts on patients with major deformities, focusing on improving their functionality and subsequently their overall aspects, our main desired outcome remaining to optimize their chances to thrive as active members of their communities.

We again had three young patients with very severe forms of Blount’s disease, a deformity of the lower limbs that is a common condition afflicting a specific ethnic group in Haiti, which also includes increased weight and specific morphologic features as well as moderate to severe progressive medial leg bowing and tibial bone changes: Samaelle Joseph, 10 years old, Nancy Samedi, 6, and Edouard Julien, 14; the latter patient returning for a second surgery to complete his treatment, started in 2013.

Manoach Louidort is a 6 year old boy, for whom we had previously done a corrective tibia osteotomy in 2013 for his post-traumatic left tibia injury and a temporary growth arrest on the medial side of his femoral growth cartilage at age 4. In 2014, when we noted recurrent bowing, following the first procedure, we had to perform another procedure, a more aggressive osteotomy correction, in view of lessened but still ongoing deformity 6 months later. Upon the last follow-up, 4 months after his last surgery, his recurring condition appears to have finally been halted. 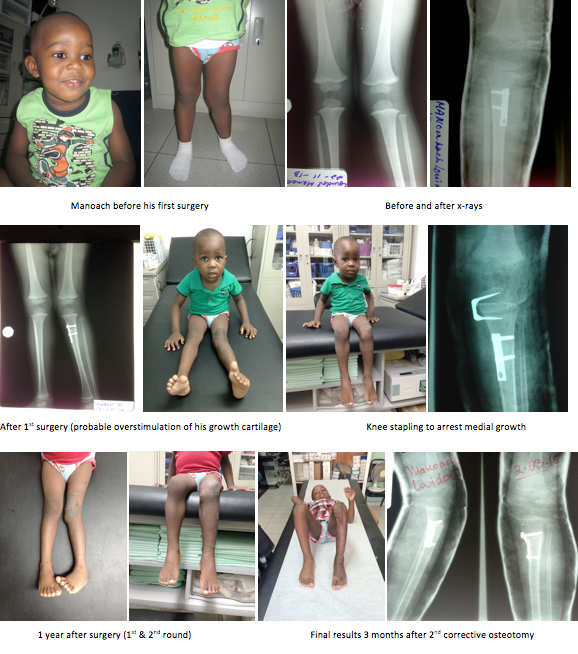 Pédaline Louis is 13 years old now, and was first treated during our second surgical program in 2013 for a severe bilateral bow leg deformity caused by rickets. She was able to see her life drastically changed following just the first surgery on her right leg that year and then benefited from the same surgery to re-align her left lower limb in 2014 to finally match her new appearance and functionality. 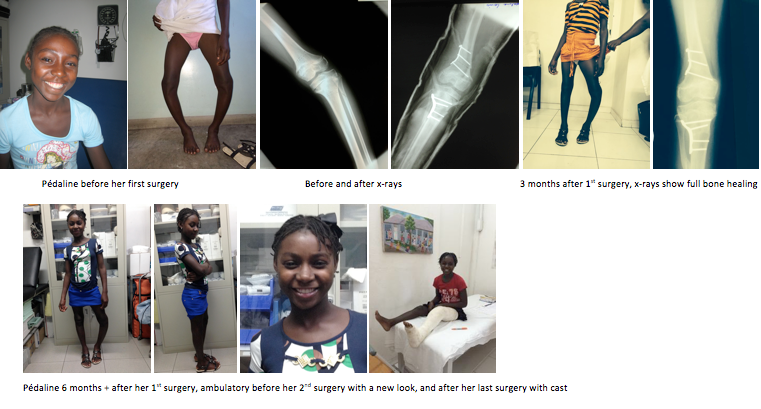 The journey of Shirley Etienne is a reminder of the impact of this orthopedic surgical program and an example of what could be done with the right funding towards the right project: This young girl came into our care more than a year after she was injured during the 2010 earthquake. She had suffered from a closed distal femur growth plate fracture, which in the midst of all the emergencies in the aftermath of the catastrophe failed to receive proper care. The turmoil following this catastrophe prevented her to later access any facility and resulted, as these injuries do more often than not, in progressive deviation and shortening of her left lower limb due to partial growth plate arrest.

After a successful procedure in 2012, aiming to restore a more anatomical alignment of her knee joint with an external fixation device, we managed to restore also more than adequate knee mobility with an intensive physical therapy regimen. In 2013, we were able to complete her surgical treatment course by addressing the more than 2 inches of leg discrepancy she had remaining from her quake-related injury. Through an escalator technique, we lengthened her thigh bone to recuperate the difference and provide her with an equal limb to the non-affected side.

Shirley turned 13 in 2014, after her 3rd surgery, and is now a young girl with a much more cheerful outlook on life, looking forward to all the usual activities other teenagers like her are engaging in. She is not afraid any longer to show her legs and is not ashamed anymore of her appearance and gait. As she continues to strengthen her lower limbs with physical therapy, she has already recuperated almost all of her previous, pre-earthquake range of motion and is looking forward to so much and is so grateful for her care, as so eloquently put by her own words in a text message she sent:

“Good morning Doctor, I had seen the text you had sent to me asking me to come for follow-up but I could not come because of the ongoing problems in the streets. I am going to come but I have to bring a surprise for you. Thank you very much for the surgeries. I am very happy. If it wasn’t for you, I would have remained damaged and would not be able to walk or go anywhere I need or have to… Thanks a lot again, please say hi to Doctor Ollivier and Dr Beauvoir for me.”

This provides a glimpse of how this surgical program or better yet, the type of quality and continuity of care we are aiming for, has impacted Shirley’s life, and could impact the life of hundreds, thousands of kids like her. 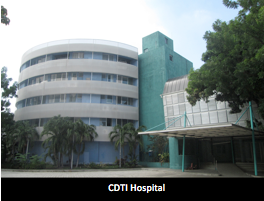 The stories of these children are examples of RMF’s interest and overall philosophy to promote and provide sustainable healthcare, which has been paramount in our efforts to implement a public/private partnership healthcare facility in Haiti available to all patients regardless of their ability to pay, RMF’s CDTI Hospital project (Centre Hospitalier du Sacré-Cœur, Hôpital CDTI). This project has been developed to become a flagship hospital, offering greater access to quality and continuity of care in a facility dedicated first and foremost to serve the patients through a sustainable model developed in a modern and integrated healthcare facility, capable of generating the required income for operational and expansion costs through both private and subsidized revenues. This flagship facility, as it is envisioned, has the potential to become a game changer in the Haitian healthcare system, improving access to quality secondary and tertiary care for the Haitian population and its visitors in an ever developing climate.

In the aftermath of the January 12, 2010 earthquake, in addition to tackling some of the immediate relief needs, RMF moved forward with a comprehensive long-term strategy for sustainable health services development in Haiti to help rebuild its shattered public health system. Six years have passed since most of Haiti’s infrastructure was devastated, and while much progress has been made in rubble clearing and somewhat in rebuilding efforts, there is still much work to be done. Our new Surgical Support program is providing surgeries and follow-up treatment for children and adults in Port-au-Prince, Haiti.