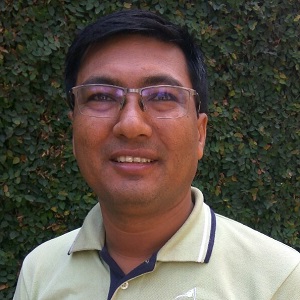 Ganesh Kumar Shrestha is a health professional dedicated to bettering the lives of underserved and vulnerable people, and has more than 12 years’ experience in the public health sector. Ganesh began his career as a community health instructor at the Western Technical Institute, Pokhara, and then worked as a government health assistant from 2002 to 2008. In 2006, Ganesh earned his Bachelor of Education from the Tribhuvan University, Dhangadhi, and in 2010, he completed his Master of Public Health degree at the Sam Higginbottom Institute of Agriculture, Technology, and Sciences. Ganesh has been honored with the Nepal Biddhya Bhushan Kha (awarded by the president of Nepal) and the Gold Medal from the Sam Higginbottom Institute of Agriculture, Technology, and Sciences.

After completing his education, Ganesh worked as a lecturer at Lumbini Medical College, and as a training coordinator for the Integrated Development Foundation (a Nepali NGO working in health, nutrition, and research) and maxPro (a private company working with health, WASH, nutrition, and social marketing). In 2014, Ganesh was employed as a national adult learning expert for Practical Action Consulting South Asia, and in 2015, he became involved in earthquake relief efforts in several districts, working as a project manager with the Nepali NGO, Integrated Development Foundation, to reestablish health facilities and birthing centers, provide psychosocial counseling to Female Community Health Volunteers (FCHVs), and distribute relief kits. Ganesh is now RMF Nepal’s Program Manager. He speaks Nepali, English, and Hindi.