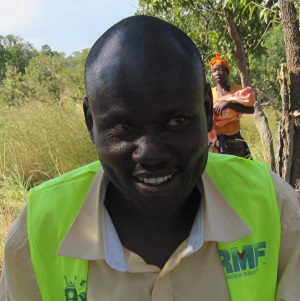 Zadock Adraiga holds a Certificate in Medical Records and Health Management Information Systems, obtained from the National Institute of Medical Records and Information Systems (NIMRIM), Mulago in 2016. Before joining RMF’s team, Zadock worked as an enrollment officer from 2014 to 2015 in national ID registration with the Ministry of Internal Affairs. While in school, Zadock was a member of the patriotism club of Merwa Progressive College and served as chairman of the Uganda National Students’ Association (UNSA), Yumbe district.

Zadock is deployed in Bidibidi Refugee Settlement as an RMF Data Clerk. He supports the data manager with data entry and is responsible for health records management, including collecting, recording, and analyzing data, as well as safeguarding the healthcare data of persons of concern in the settlement and its community outreach programs.