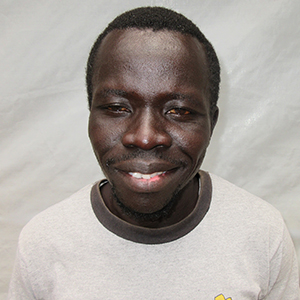 Taban Abdu is a refugee from South Sudan working as an RMF Interpreter. He completed his primary education in Uganda at Keyo III Primary School in Adjumani and attended Arua Secondary School for his Ordinary Level studies, after which he returned to South Sudan to establish himself. In 2014, Taban trained as a security guard with Warrior Security Limited, where he served until 2016, when he could no longer endure the insecurity caused by the conflict in his country and fled back to Uganda. As a refugee in Uganda, Taban has worked as an interpreter with Oxfam and the Danish Refugee Council. He joined RMF’s team in 2017, and he is deployed at Iyete Health Centre III in Bidibidi Refugee Settlement.

Taban is a fan of music and soccer. He is fluent in Arabic, English, Kakwa, Pojulu, Lugbara, Swahili, and Madi.